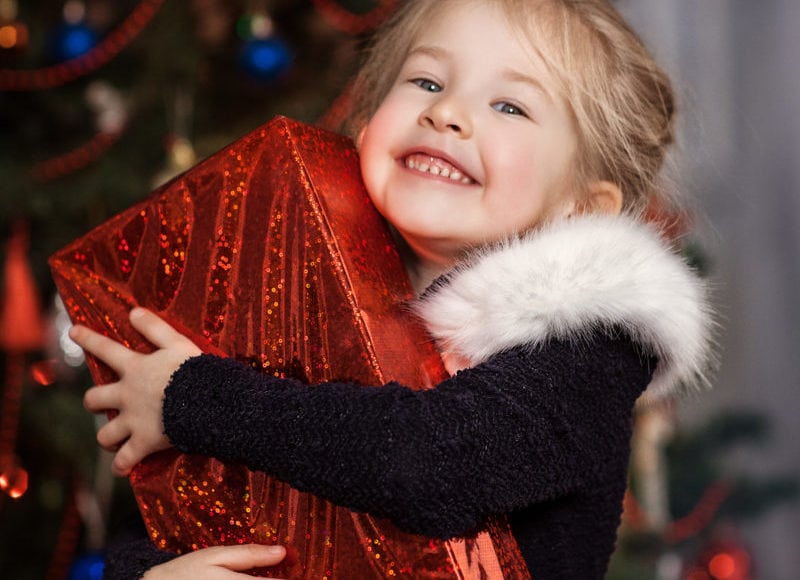 It’s a classic Christmas story. The children wake up at dawn waiting anxiously at the top of the stairs. They peer over the banister down to the family room below, wondering which from the dozens of brightly wrapped presents they will open first.

Did Santa get my letter, they wonder. Is that big one for me?

The sounds of mom’s and dad’s footsteps bring their lingering thoughts back to present, and with a nod from mom, they barrel down the stairs.

The family room is just as they hoped. Santa indeed read their letters, and they are awestruck by the gifts he brought them.

They spend the morning unwrapping and playing.

It’s a scene realized all across the country. Children wake up on Christmas morning, their starry eyes dazzled by the toys they earned by being kind and doing good since last Christmas.

But for Gunnery Sgt. Julio Jimenez, a United States Marine, it is the group of children who see a different Christmas reality that are on his mind at this time of the year.

“Growing up, we didn’t have much,” he says. “I don’t remember opening presents at Christmas time. I’ve been there, where the kids don’t receive anything.”

And it’s this exact reason that he’s been volunteering with the U.S. Marine Corps Reserve Toys for Tots Program for the last 11 years.

“I never want a child to feel that.”

An estimated 38 percent of children in the city of Knoxville live in households below the poverty level while nearly 47 percent are living in households using public assistance. That’s according to the U.S. Census Bureau’s 2011-2015 American Community Survey. Many households who hope to celebrate the holiday just like many others aren’t able to, as they lack the expendable income to purchase gifts for their children’s Christmas.

It’s a sobering thought: a child who made sure to be extra kind throughout the year, waking up with nothing.

But one organization has been working to correct that.

The mission of the program is a seemingly simple one: collect new, unwrapped toys between October and December each year and distribute them as Christmas gifts to less fortunate children in the community. But this is about more than simply toys. According to the program, it’s a message of hope for children of struggling families.

Sgt. Steven Xiong, a United States Marine for nearly seven years who coordinates the Knoxville-based program, has been reaching out to the community for the last half of the year, encouraging individuals to donate during the collection drive and partnering with businesses to have them sign up as drop-off sites for donated toys. Those nearly 3-foot tall drop off boxes will be out through Thanksgiving.

“Businesses that are willing to help us out and have customers they know will help by dropping off a toy, contact us, go on our website, request a box,” he advises. “We will send a Marine to drop it off, put posters up, and let your customers know it’s for the kids.”

The Boots on the Ground

Companies, such as Toys R Us, Babies R Us, and AC Moore support Toys for Tots nationwide, while small businesses throughout the community, such as Sheffield Wealth Management and Fisher Auto Parts, make up the bulk of those drop-off sites. The reserve unit provides not only the box, but marketing materials as well. And in exchange each year, some businesses take their service just one step further, rallying their staff behind the cause.

Barge, Waggoner, Sumner and Cannon, Inc., an engineering and architecture firm with an office in Knoxville, is one of those businesses. The company looks to support different organizations from year to year, so this is its first year as a drop-off site in Knox County. The toy bin supports all 12 floors of their office building and anyone in the downtown Knoxville area looking to donate.

“We’re a convenient location,” says Brenda Humphrey, Project Administrator for the Knoxville office. “We always try to reach out and do something that pertains to children. That is the passion, to spread the blessings that we’ve received and through the community for those who are maybe on hard times during Christmas time.”

The staff chose Toys for Tots as their annual charity for 2017, but wanted to help even more. For some of the staff, that came in the form of payroll deductions to the program throughout the year. And as a team, they decided to put Toys for Tots into the running for a company-sponsored grant.

“You have to be active in the organization in order to get the grant,” she says. “This is how we’re being active. We’ve applied for $2,500 to give in addition to the toys we collect at Christmas and in the fall.”

Humphrey says she hopes to find out about the grant before the 2017 toy collection season ends, so that should the program be awarded, Marines will have time to purchase extra toys. This auxiliary fundraising is vital to the program.

“We stop collecting toys December 10, and then we sort them by age and gender,” Xiong explains. “If people want to donate money, we will take it because then we can go shop for toys we are missing.”

Throughout the fall, families across the region register for the Toys for Tots program. The Knoxville-based program supports children in Anderson, Blount, Knox, Loudon, and Roane counties. Families register for the program online. Roughly 18,000 to 20,000 toys are collected each year, Xiong says.

The toys are stored in a warehouse in a local undisclosed location and are distributed during a three-day period in December. Families are instructed what day to arrive to pick toys for their children. But if someone arrives without having registered, they won’t be turned away.

“We’re not there to judge anyone,” Jiminez says. “It comes down to the kids and their smiles.”

And any leftover toys at the end of the three-day pickup period are put to good use: they are brought to East Tennessee Children’s Hospital. This is a priceless experience for all involved.

“It’s one of those feelings you can’t really describe,” Jiminez says. But he tries, and the memory of it overwhelms him as he speaks. “The ones that touch you the most are the little ones in beds that can’t move around, but as soon as they see you, the look they give you is unbelievable. You get an overwhelming feeling in your heart that you just want to hug them and tell them everything is going to be ok.

“At that moment, it doesn’t matter how much they are going through or what’s going on in their life. They only care about that one toy.”

The Toys for Tots program has been supporting the Knoxville community for quite a long time, but the national program traces its roots back to 1947. Major Bill Hendricks and a group of Marine Reservists in California wanted to support children who went without around the holidays, so they began collecting toys and distributing them. The pilot program was so successful that the U.S. Marine Corps took the program under its wing a year later and expanded it to the reserve units across the nation. Today, the Toys for Tots Foundation, the backbone organization that provides administrative, advisory, financial, and promotional support to local chapters, is based out of Virginia.

Typically, active duty Marines serve as coordinators each year for the local programs, while reservist Marines living in town support in any way they can, whether that means dropping off a box to a business or standing by a collection box during events to inform attendees about the program. Xiong has 10 or so Marines working with him to do this in the area, each helping out at roughly three to four events throughout each year—from car shows and sporting events to concerts and dinners.

“We’re a nonprofit. We don’t take money or earn anything. We’re just trying to give back to the community,” he says.

Nationwide, Toys for Tots has distributed more than 400 million toys to nearly 200 million children. For Xiong, this program is more than a volunteer opportunity. It’s personal. Like Jiminez, he recalls the struggle his family underwent as a child. But he was fortunate to have a few gifts on Christmas, and that was because of Toys for Tots.

“I remember my parents going to the warehouse,” he recalls. “They had all of these toys in bags when they would get home. I specifically remember the train and train tracks I received one year.

“Christmas is coming soon. We have to put in the effort. We need to do as much as we can to give back to the kids.”

Individuals looking to donate either funds or toys to Toys for Tots can visit knoxville-tn.toysfortots.org.