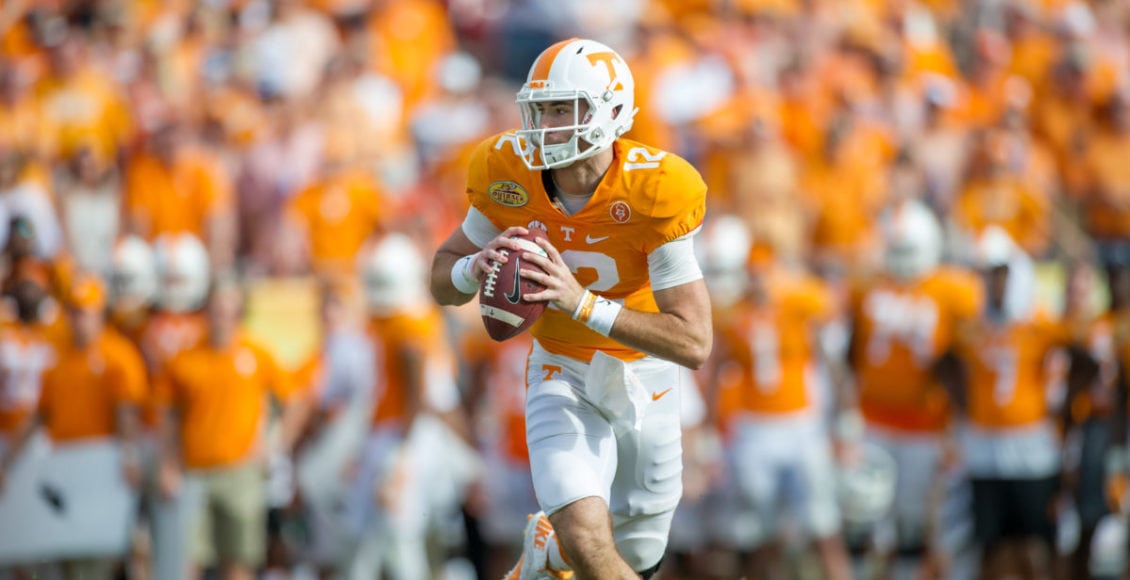 The opening of a new Volunteer football season brings many questions including a quarterback battle between Quinten Dormady, the returning junior, and Jarrett Guarantano, the redshirt freshman of whom great things are expected.

Questions about keeping Butch Jones off the hot seat and assuring a top-5 recruiting class are certainly pressing, and revisions to the coaching staff are also on the mind of the Vol faithful. But these are secondary to the primary question: How many games will they win this season?

The Vols aren’t experiencing the pre-season hoopla of 2016. Las Vegas has set the number of games they’ll win this year at 7.5. Simply put, the odds makers believe that the 2017 Vols will win either 7 or 8 games. Let’s see how that shakes out.

As former Tennessee standout wide receiver Jayson Swain notes, the expectations formula is fairly simple: “When you have more talent than the opponents in your division, you should be expected to get to Atlanta.”

We start with what’s expected of the Vols.

Alabama, LSU, Georgia and Florida are all ranked ahead of Tennessee. The Vols play the Crimson Tide and the Gators on the road, and LSU just has too much talent. These three are likely losses.
After six games, this puts the Vols at 3-3, with six games remaining. Therefore, the team from Rocky Top must win five out of the six remaining games on the schedule in order to transcend the 7.5 game expectation.

Four out of Five

If we maintain that things return to normal, we can put Kentucky and Vanderbilt back in the win column, even though, on paper, both of these squads look improved from last year. Missouri may have an explosive offense this year, but there are too many weaknesses in their defense, so let’s put the Mizzou Tigers in the win column as well. Tennessee is 6-3.

Surely, two more wins lurk in that schedule, so let’s keep mining for gold. Who’s left? Two teams from Georgia—the Bulldogs and the Ramblin’ Wreck of Georgia Tech—and the Gamecocks of South Carolina.
Tennessee opens the season in Atlanta against Tech in the Falcons new home, Mercedes Benz stadium. This most likely means a home crowd for The Yellow Jackets, with both teams playing in an unfamiliar venue.
Georgia Tech runs that nasty flex bone triple-option. Historically, the Volunteers have not fared well against the option. Tennessee certainly has more talent than Tech, but the option offense and the venue might give the Vols more than they want. Unless Butch Jones and company arrive extremely well-prepared, give the Killer Bees a slight edge to put Tennessee at 6-4 on the season.

The Georgia Bulldogs have to come back to Knoxville in 2017. With them will be a very formidable 2nd year QB in Jacob Eason and the offensive coordinator is still Tennessee’s old friend Jim Chaney. They also return Nick Chubb and Sony Michel at running back. According to Swain and many sports commentators, this is such a must win for Tennessee. Because the game is at home, give a slight edge to Tennessee. Tennessee is at 7-4. One win to go.

Incoming freshmen could help. Two that will almost have to in some capacity are Trey Smith, a 5-star recruit offensive lineman; and Ty Chandler, a 4-star running back. The Vols should hope that that one or two freshmen develops at defensive line and linebacker. These positions are thin.

Jones must get a better at game management. He has put together the best staff of his career this season. Defensive coordinator Bob Shoop had a shaky start in his first season, but he has an improved staff. Brady Hoke (defensive line) and Charlton Warren (defensive backs) should be big improvements for the Vols.

On the offensive side of the ball, the staff picked up their first QB coach during Jones’ tenure at Tennessee with Mike Canales, as well as new wide receiver’s coach Kevin Beard. These are both widely viewed as improvements. New offensive coordinator Larry Scott provides a steady hand in continuity, and, like Brady Hoke, brings some head coaching experience to the table.

Tennessee has more talent, but South Carolina packs a fairly potent offense. Questions remain, however, about a Gamecock defense that will struggle to stay in the top half of the SEC. Butch Jones has never beaten Will Muschamp: not at Florida, not at Carolina.

All things considered, Tennessee wins over South Carolina in an ugly game and makes it to another Bowl. That should keep Coach Jones here and a good recruiting class intact.

So let’s get ready for thirteen weeks of ecstasy, pain, and exhilaration. It’s football time in Tennessee.

From the shores of Paris Island to the sidelines of a Tennessee football game, Hobe has travelled around the world and photographed much of it, but his favorite place to take pictures is still the UT gridiron. He is a Marine Veteran, has two kids and three granddaughters, and when he’s not busy hauling out his Nikon to a big game, he can usually be found watching sports.