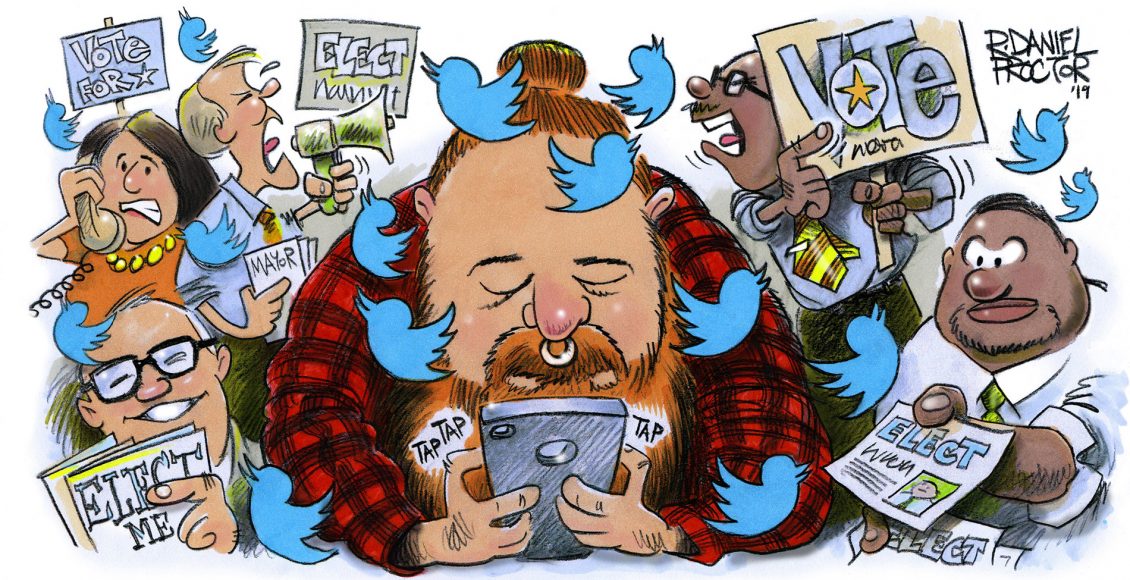 Influencing politics in 140 characters or less

His appearance something like that of an Amish survivalist, Fletcher Burkhardt visually seemed an unusual candidate for Knoxville mayor. Regardless of the outcome, his campaign is onto something that is increasingly separating campaigns of the past from those of the future: social media. Regardless of how successful Fletcher Burkhardt is in his quest, he’s a herald of the local race future.

This means an ever-smaller number of people control who controls Knoxville. That suggests campaign spending should decrease; instead, the fight is ferocious for this up-to-this-point contracting voter universe. But pouring money into traditional campaign tactics comes with a question mark, because as communication sources grow so does the ability to block them out.

Today, it’s possible to pause your TV and fast-forward through commercials; satellite radio means voters may never hear a radio ad; direct mail is increasingly lumped in amongst junk mail; print ads may be seen, but maybe not; people are increasingly irritated by robo-calls; and press events draw fewer or no reporters because of smaller news staffs.

As Burkhardt said in an interview with Knoxville Recuro, “I am doing things much differently than your traditional campaign, relying heavily on social media,” adding, “We will also be running social media ads and doing a campaign video this month that will run on social media platforms.”

Local campaigning has a challenge in terms of social media sophistication and cost, but what matters is what wins, and social media is increasingly a tool to build victory.

A challenge is that access to online platforms and round-the-clock single-philosophy news and opinion sources result in many people being far more interested and passionate about national affairs than anything occurring locally. Many would rather commend or condemn a U.S. President than focus on who’s running for mayor, or why they want the job.

Voters are best motivated if you hit them where they hurt. And to feel it they must see or hear it. That’s particularly true for eye-glazing local races. Social media is the 21st century cousin of direct mail: pieces that must be produced in their thousands and mailed–at significant cost. Depending on its refinement level, social media takes direct contact just about to a level seen in the movie, Minority Report. In the film, facial recognition technology identifies individuals in stores and gentle voices suggest various products in which they might be interested based on purchasing behavior.

Social media tracks us. Everyone has felt a certain creepiness at having walked into an establishment and immediately receiving a smartphone message asking how we liked our experience, and would we be kind enough to rate the place. You research a vacation site; suddenly ads pop up on your Facebook page about the same or similar places vying for your business.

Such tracking can be effective in political messaging in that it’s delivered directly to your eyes until or unless you block it–and there are ways around that tactic. The politics of electioneering are increasingly sophisticated, and the faster these can be applied at the local level, the more difference–favorable or unfavorable–they’ll make.

Phone banks typically identify voters based on preferences, after which the voter is encouraged to vote or ignored, depending on their response. But with the rise of cell phones, phone banks are less definitive. Social media is immediate, direct contact.

Don’t like Recode Knoxville? In favor of the inevitable call for “affordable housing?” Favorable or opposed to Knoxville being a sanctuary city? Expect to find the issues that mean the most to you being the social media items you see, particularly as local campaigns become more proficient in its art and science.