A Haven of Their Own 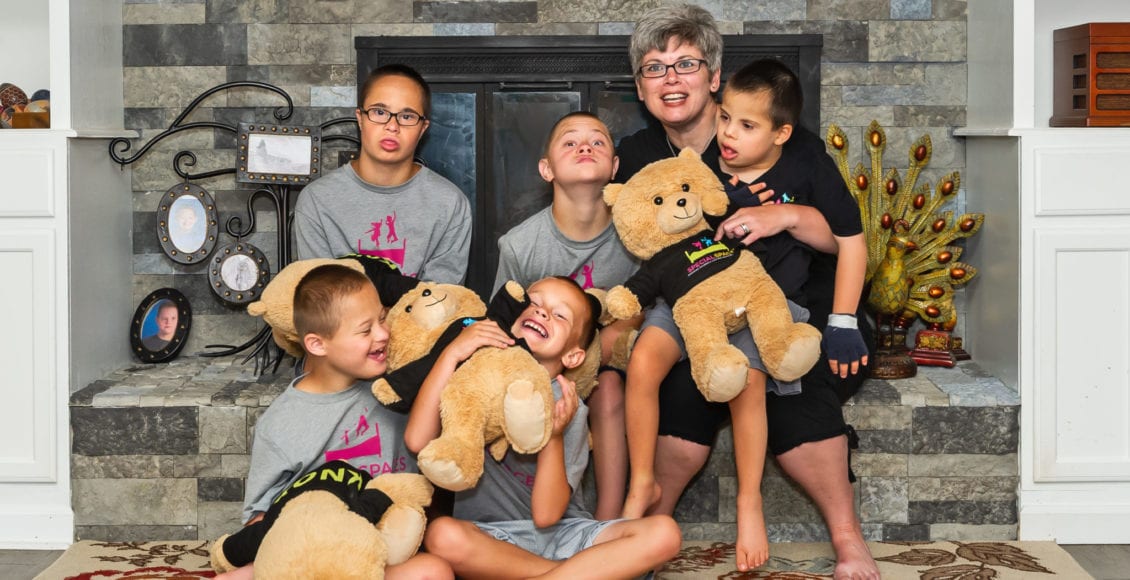 It was Saturday morning in early May when a crew of eight arrived at the Carmichael residence for a room redesign. Geared up in clothes for painting, tools galore, furniture, and more, the team had their assignment and they were determined to complete it that day.

While this scene sounds like that of a home renovation show on HGTV, it’s actually something quite different. These eight individuals weren’t construction workers or interior designers, rather young professionals from the local Rotaract in Knoxville, working on behalf of an organization called Special Spaces, eager to make a difference.

“The work crew arrived and they gave us a gift card to go out and have fun,” says Stephanie Carmichael. When she arrived home later that day with her family, what they found took their breath away. This Special Spaces team of volunteers had spent the day redesigning the bedroom of one of Carmichael’s children, Cobi, hoping that it would be the special space he (and his family) needed. “It was so much more than I expected, and it is the perfect space for him.”

Children and teens dream of their ideal bedroom. That space they can retreat to at the end of the day to reboot and recharge. A place that can be their solace and refuge. For children with a life-threatening illness, that space can become their haven. It can become so much more than a bedroom.

For Cobi, this room redesign was everything. At just seven years old, Cobi has Down Syndrome, Cerebral Palsy, and a traumatic brain injury. The Carmichaels adopted Cobi from Bulgaria in 2016, but shortly after arriving home to the states, Cobi was diagnosed with leukemia. After two and a half years of chemotherapy, ending just this past April, Cobi is now in remission. It’s been quite a journey for this young life.

After an article about Cobi and the Carmichaels ran in the Knoxville News Sentinel, Carmichael was approached by the Special Spaces team. The organization’s mission is to create dream bedroom makeovers for children ages 2 to 19 suffering from life-threatening illnesses. Cobi is just one of hundreds that have been helped.

“It first started with my mom redoing a room every few months in 2004,” says Maggie Sewell, Executive Director of the original Knoxville chapter, speaking of her mother Jennifer Swain. At that time, it was just a local Knoxville-based organization. But after being featured on a television show in 2011, Special Spaces was no longer just a hidden Knoxville gem.

Chapter requests poured in to the local organization, resulting in the network of 23 chapters in 17 states that you see today. “To be able to see the amount of reach the organization has is really kind of incredible,” Sewell says.

Each chapter is serving youth at pivotal points in their lives, just like Cobi. “The organization is a fantastic addition to the special needs community,” Carmichael says.

While there are many Special Spaces chapters, redesigning a room isn’t something that happens overnight. It takes tireless commitment from the volunteers who work in the chapters to make those dreams reality. And everything done funnels through to the national office, based in Knoxville. “There are a lot of volunteers who spend a lot of time making dreams come true for these children and these families,” says Michael Eimers, Finance Director of Special Spaces, adding that there are more than 1,000 volunteers committed to the mission.

One of those people is Jordan Knight, a member of the local Rotaract group that helped to redo Cobi’s room. “At this stage in our lives as young professionals, we don’t have financial means, but we do have time,” Knight says. The club’s fundraiser earnings from the year were earmarked for this project, and thanks to a dollar for dollar match by the local Rotary Club, Knight and his peers made it happen. Roughly $3,000 was going to a redesign through Special Spaces. “It took four months to find the right family,” Knight says.

Applications help the Special Spaces team understand an applicant, their needs, and their family. There’s also a medical eligibility piece to the application, as the organization has narrowed its focus to children with cancer, children undergoing or waiting for a transplant, children with life threatening heart conditions, and children with brain tumors. Chapters review the applications weekly and a member of volunteer Child Sourcing Committees visits the homes, to review and get a feel for what needs to be done. When Knight and his team read Cobi’s application, they were all on board.

“They spent the last year raising money to do this and were so excited to work with this family,” Sewell says. “I told them about Cobi and they were 100 percent in.”

Once an application is accepted, the Special Spaces team works with the family of the child to create the most wonderful room. For Cobi, that meant bright colors, things in motion, with interesting textures and function. “Cobi has sensory issues so we were desperately wanting and needing a sensory safe place for him to play,” Carmichael says. “He is a sweet, fragile, loving child that is a sensory seeking maniac.” Knight and his team took that information and ran with it, knowing that the room also needed to have ample and accessible storage space for all of Cobi’s medical supplies.

Once a match has been made, the director of the chapter meets with the family and a core team to look at the room, identify their needs, and jump into the creative process. Just like Knight’s team, this process isn’t typically done by a designer, but rather volunteers eager to make a difference. “Sometimes Special Spaces forces you to think outside the box,” Eimers says.

Cobi’s room was transformed into a haven, one where he stays and plays, something he had never done before in his room, Carmichael says. A trampoline with a handle so he could strengthen his legs, a four-foot bubble light with changing colors, a television, and other sensory items. A new mattress, donated by Mlily made the room complete. Together these items made this space so special for Cobi. When the “big reveal” happened, it was clear from the smiles that he was surprised. “I’ll never forget this. He went straight to the beanbag and fell into it, threw his arms behind his head like he was just relaxing,” Knight recalls. “It’s so important that they are comfortable in their environment.”

The room was everything Cobi needed and more, but it was also something his parents, both Registered Nurses caring for three other children with Down Syndrome and in the process of adopting another (in addition to their two older biological children), needed. “The storage has been a game changer for me,” Carmichael says. “It has made me less stressed and I can actually have a spot for everything to take care of Cobi.”

While every room created is starkly different, the impact is there. “For some people, they hear about what we do and think ‘How sweet. They create cute bedrooms.’ But there’s a medical reason, too,” Eimers says. “It’s about keeping the room as medically sound as possible so making sure nothing from outside of the room can come into it and contaminate it.” They make sure the air filtration system functions and is clean; if needed they rip up the carpet. “If we can keep it medically functional and sound, yet still look like it’s a fun place to hang out and to retreat to, that’s the icing on the cake.”

Making these rooms happen is of course thanks to the staff and volunteers, but also a testament to the chapter’s community. Rooms cost anywhere from $4,000 to $6,000 to create but the organization gets many items donated, freeing those dollars up to purchase medically necessary or custom built items.

Many corporate sponsors help to make rooms happen and often are the ones supplying not just funding, but the volunteers as well. In Knoxville, Eimers says, the average room takes 10 to 15 volunteers. “Knoxville is such a generous community and I think that’s why we’ve been able to expand the way we have,” Sewell says. “People are always asking how they can help and what they can do. And we’ve been able to partner with some really incredible businesses and other organizations.”

Last year, thanks to all of this support, every applicant in Knoxville was able to have a room makeover. “People think that children with special needs get assistance from agencies or the government, but that is not true in our case,” Carmichael says, “so for someone to do this for our family is very much appreciated.”