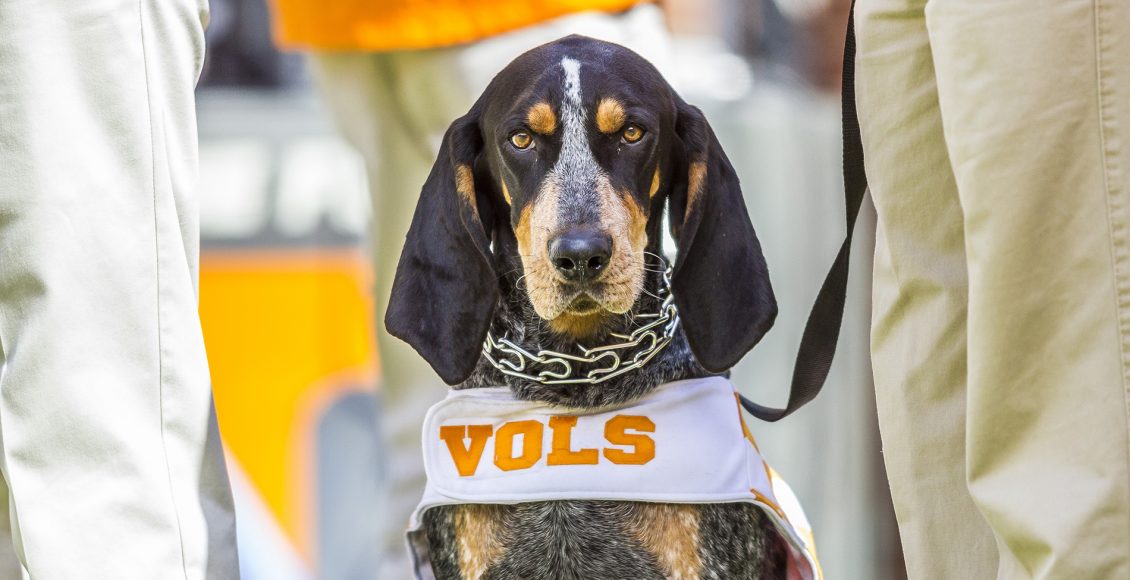 As the saying goes, “It’s football time in Tennessee!” Every home-game Saturday in Knoxville, the Pride of the Southland marching band electrifies Neyland Stadium by forming the big “T” that funnels the team onto the field in front of 100,000 cheering fans.

And leading the charge, howling as he bolts through the band ahead of the cheerleaders and rampaging players, is Smokey, the team’s Bluetick Coonhound mascot.

You almost have to see it, experience it, to get a sense of the ceremony. Smokey, charging through the T under the sight and sounds of fireworks exploding overhead. It doesn’t hurt to be a die-hard Vol fan either. But for any fan of collegiate sports it’s an exciting start to home football games at UT. During the game, Smokey’s familiar howl on the sidelines helps to keep fans charged up as they cheer for their beloved Tennessee Vols.

On some Saturdays, on the visiting sideline, the opposing team has its own mascot.  Think of Auburn’s War Eagle, Baylor’s Bear, or Florida’s dull and dimwitted gator.

But why do teams like Tennessee, replete with the nation’s top talent and a wealth of fan support, have mascots that roam the sidelines? The term mascot originates from the French slang term “mascotte” which means “good luck talisman” or “sorcerer’s charm.” So, mascots were originally kept by sports teams because they were thought to bring good luck.

The first live animal mascot in college football is thought to be Yale’s “Handsome Dan,” a bulldog who debuted on the Yale sidelines in 1892. The University of Tennessee joined the live animal mascot movement in 1953 when a student poll convinced the Pep Club to hold a contest to select a mascot for the UT football team. It was decided before the contest that the mascot would be a Bluetick Coonhound. Nineteen different Blueticks were brought out at halftime of the Mississippi State game, and the winner was to be decided by the cheering of the crowd. A dog named “Blue Smokey” was the last to be introduced. When his name was announced, he howled and the crowd cheered, which made Blue Smokey howl even more, and so he was crowned as the first official animal mascot of the University of Tennessee.

There have been 10 Smokeys since 1953, including Blue Smokey. The first five Smokeys were all in the same bloodline. Other bloodlines were used for Smokeys VI through IX. The current mascot, Smokey X, is from a new 100 percent born and bred Tennessee bloodline that has an extremely good health history.

These 10 Smokeys have presided over eight SEC championships and two national championships. Smokey is so beloved by the UT faithful that after Smokey VI suffered heat exhaustion during the 1991 UCLA game and could not be on the sidelines for a few games, fans swamped the UT phone lines with calls inquiring about his condition. He was listed on the official injured reserve list for the team during his recovery, and a dog named “Woody” filled in for him until he was able to return to duty later in the season.

Over the years, several of the Smokeys have had some adventurous moments. Smokey II was dognapped by Kentucky fans posing as members of the UT Pep Club. It was a harmless prank, however, and Smokey was returned a few days later, after being draped in a Wildcats blanket and being “forced” to attend a Kentucky pep rally. In the following weeks, some inept Vanderbilt fans also tried to kidnap Smokey II but nabbed an old hunting dog by mistake. Smokey II also had a famous confrontation with the Baylor bear defending the honor of Tennessee during the 1957 Sugar Bowl where Smokey barked at the bear, and the bear took a couple of missed swipes at Smokey. Many years later, Smokey IX protected his home turf by taking a nip at an Alabama player during the pre-game warm-ups. Like a true Vol, Smokey is always ready for a challenge and to take a bite out of ‘Bama.

The Smokeys have been given numerous awards and accolades over the years. They have been featured in several television news segments and there was even a book written about their history. Sports Illustrated recently chose Smokey to be among the top 10 greatest mascots in college football history.

Here at home, the University of Tennessee has erected several statues of Smokey around the campus honoring his service. And just this year, the Governor signed a bill making the Bluetick Coonhound the official dog of the state of Tennessee.

Our current mascot, Smokey X, spends his time off the field living comfortably as a family pet with the Hudson family in north Knoxville. According to his official senior handlers, Chase Cardoza and Jesse Head, Smokey X lives a pampered life. He has a large fenced area to roam and access to the inside of the family home at night to sleep, to escape the weather, or just to check on his family.

Chase, Jesse, and the junior handlers attend to all of Smokey’s needs when he is fulfilling his official duties as a UT mascot-ambassador, chauffeuring him to the various events and functions where he represents the university. They describe Smokey X as an extremely well behaved dog, “one of the nicest dogs you could ever meet.” Still, they admit, he has his quirks.

He will stubbornly chase any bug that crosses his path and not settle down until the bug is caught or escapes. Then there’s the story of a handler who was eating a sandwich and who made the mistake of laying it down and looking away for just a moment, just long enough for Smokey to pounce on the sandwich and bolt it down. I say, “Go Smokey.”

Bluetick Coonhounds make good family pets, both Chase and Jesse agree on that.  “Just make sure that your Coonhound gets plenty of exercise every day,” they advise.

With the great care provided by the Hudson family and his handlers, we can be sure that a Smokey will be prowling the sidelines and howling support of the orange and white for as long as there is Tennessee football. I am confident that I speak for the host family, the handlers, Smokey, and all UT fans when I end by saying, “Go Vols!”

Rick Sparks spent his childhood raising and caring for a menagerie of animals, everything from the usual fish, hamsters, and dogs, all the way to rats, snakes, and giant catfish. After a two-decade career working as a medical physicist in drug development, he returned to veterinary school. Rick has also worked at a wide variety of other jobs along the way, including musician, bartender, raft guide, commercial credit analyst, adjunct professor, and nuclear medical science officer. Rick currently resides in Knoxville, TN with his wife, son, and two weimaraners.