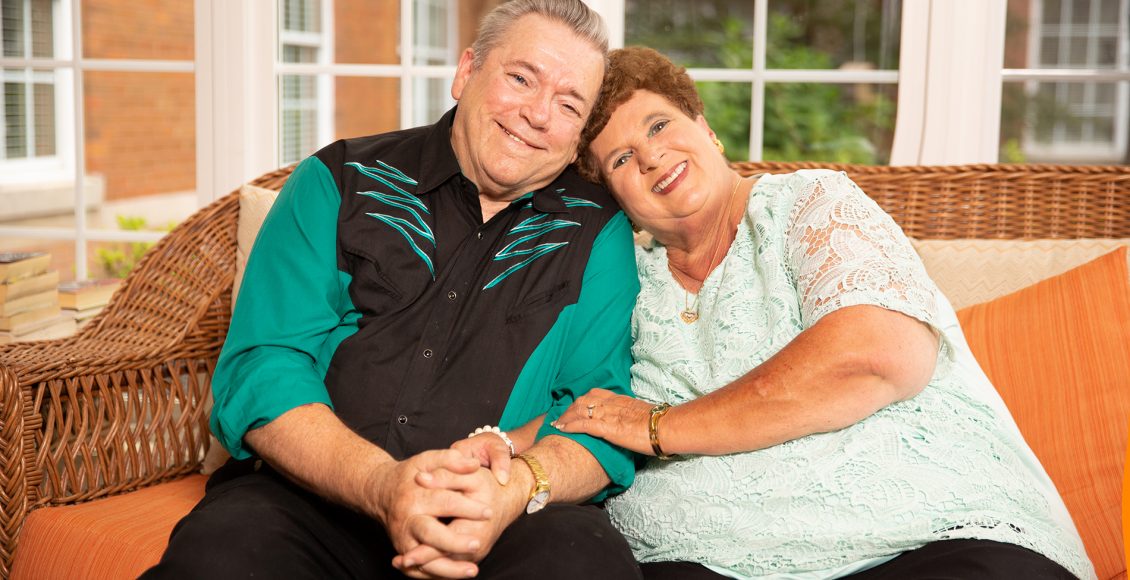 The concept of ‘love’ conjures a wide range of responses. For many, the concept of the word changes and evolves through different seasons of life, especially as it pertains to romantic relationships. We decided to explore the idea of love and dating later and how it can help improve your life as you age.

Love has a very different connotation in high school than it does in college, and it has a different weight to it in young adulthood than in years previous. To put it plainly, ideas of love and what makes a romantic relationship worthwhile changes as we age and evolve in life. We often associate dating and romance with youth, but romantic relationships can be just as impactful and important later on in life. I had the honor of talking to a local couple who are living this claim out loud in their everyday life, through their care and devotion for each other.

Jon Alan Brewer, 70, lives at NHC Farragut, where his girlfriend Vicky Deaton comes to visit him at least three times a week. That’s where I first met the two of them. When they walked in, the room seemed to light up with a certain joy. Everyone knew who they were, from the delivery man dropping off a package, to the woman sitting behind the front desk. And both Jon Alan and Vicky were wearing inerasable smiles on their faces, emanating genuine joy and love. The moment was cinematic, and it continued as we sat down for the interview. Brewer proudly introduced the woman on his arm as his “girlfriend.”

Through our time together, I learned that Brewer and Deaton have been together for almost 40 years, first meeting and dating when they worked together at Pepsi-Cola in 1980. But their relationship has definitely grown sweeter with age. “We seem to really get along a whole lot better now than we have in the past,” says Deaton. When asked why they think that is, Deaton continued, “It’s everything we’ve learned by being with each other and understanding each other’s personality…Don’t try to be somebody you’re not [in a relationship].”

Brewer and Deaton may have learned this lesson through years of working things out between the two of them, but this concept is backed up by professionals. Dana Vince is both the owner of Healing Hearts Counseling and a licensed counselor, mental health service provider, and certified emotionally focused couples therapist. When asked how dating in the later years of life compares to dating when younger, she says, “It comes down to maturity and experience. Early in adulthood, most people are figuring out who they are…establishing independence and figuring out their path in life. Often times love and relationships are idealized. Dating later in life there is typically a more solid foundation in knowing who you are and what you want, and life experience plays a role in choices of partners.”

Brewer and Deaton exemplify this perfectly. After sharing with me that their relationship is better now than when they were younger, I noticed how much they care for each other even more. It’s brought life to the both of them. Brewer lives at NHC Farragut because his doctor told him he could no longer live on his own. Understandably, the idea of depending on other people to take care of him wasn’t attractive at first. But Brewer has found a renewed chance at life through his new living arrangements, along with an increased love for Deaton. “Loved ones, like this one right here; for 40 years we’ve been up and down, but these last seven or eight years we’ve been back together she’s been there for me. And I know that I haven’t been 100% right, and I’m not giving no excuse or anything. But I know she has problems also as far as health goes. And even me looking to her and realizing she has problems, I give a little… If you love each other enough so you can give and take, that’s the only way you’re going to be able to accept things.”

Brewer and Deaton’s dedication for each other goes beyond just providing companionship. An intimate, secure relationship can actually improve your health. “Being in a healthy relationship means being securely connected to your intimate partner. You are secure in the sense that you know and feel your partner cares for you, that you matter to them, and that they will be there for you whenever you need,” says Vince. “This kind of closeness in a relationship suppresses the stress hormone cortisol and increases the hormone oxytocin, which is dubbed the cuddle hormone. This has very positive impacts on overall physical health. The presence or even mere thought of a securely attached loved one can relax the nervous system, reduce feelings of depression and anxiety, and make difficult situations easier to face. We are healthier together.”

Brewer and Deaton have such a strong dedication to their relationship, I asked them if they had any advice for couples in similar life situations. “I think what I would tell someone is, you know, a lot of people want to give up on life, but… you never know where someone might be waiting for you. You’ve got to be able to communicate with and be kind to people. It’s not a one-sided situation. You have to compromise. You may not like to do what he likes to do, but you can compromise and work with one another. People need to have open communication. Don’t go away from each other angry. You have to work it out right then,” says Deaton.

Brewer added that “money is not everything,” and Deaton continued that “stuff won’t bring you happiness.” It can be so easy to get caught up in a success that’s defined by material possessions, but it can take us away from what truly matters. Brewer shared that he can’t count how many times he wishes he could tell his parents how much he loved them and was grateful for what they gave him in life. He encourages never taking your loved ones for granted, because tomorrow is never promised. Despite personal differences, it’s of the utmost importance to continue to love and work together.

Working out differences is something Brewer and Deaton take beyond personal relationships. In a vulnerable moment, Brewer talked about being kind to everyone around you, no matter who they are. “Now in our later years of life, we’ve for sure come to realize that we all have problems. Now let’s work together with each other and with love, helping each other. And that’s where we stand,” says Brewer, while gesturing to Deaton who nodded with every word he said.

Through my time with Brewer and Deaton, I came to understand the hard work and dedication they’ve put into their relationship. Life circumstances stepped in and brought them closer through poor health and a new sense of care and connection, but they’ve realized what’s important in life. They’ve worked through their differences, understand their imperfections, and seek to live in joy and humility. One of Brewer’s last statements to me was that at the end of his days, “I hope I’ve expressed joy.” Brewer and Deaton both showed me just how much joy they bring in each other’s lives. A lot of it in simple ways. They find joy in going to Walmart and doctors’ appointments across town. They go out to eat on special occasions, and they like to watch movies together in their separate homes while talking on the phone. They’ve found that love is worth any troubles or differences it might bring. And according to Vince, they’re on the right track. “Go slow, be true to yourself, know who you are and what you want. Don’t compromise those things for approval or acceptance. Love is risky and scary, but we are all worthy of the endeavor,” says Vince.

If you think you might be ready to start a relationship with someone, Vince encourages that “each person should trust themselves to know when the time is right and when they are ready to start dating again. Once a person feels ready, it would be a good idea to seek counseling at this stage as well to best prepare and be supported in the move forward into a new love relationship. And know that it is okay to be scared.”

In my time with them, Brewer and Deaton showcased their love to match every word that they claimed. Just sitting with them felt like a blessing, and I left NHC Farragut with a full heart. I hope that when my husband and I are their age, we can show the same example of grace and undivided devotion to each other as they did.
If you would like to pursue relational counseling for a new relationship or one you’re already in, you can find more information on Healing Hearts Counseling by visiting their website at marriagecounselingknoxville.com or call them at 865-283-1777.

When she isn’t working as Visual Coordinator for Young-Williams Animal Center, Hannah is dreaming up a seemingly endless plethora of new ideas and adventures. If she’s not thinking up a new way she could make apple pie even better than it already is, she can be found perched near her cat reading one of her many favorite books, trying her best to write a new one, or watching the same sitcoms on Netflix over and over again. Hannah also enjoys trekking to the mountains in Thoreauvian fashion from time to time—with her camera, favorite people, and no agenda in tow.

How to entertain your kids this summer in Knoxville