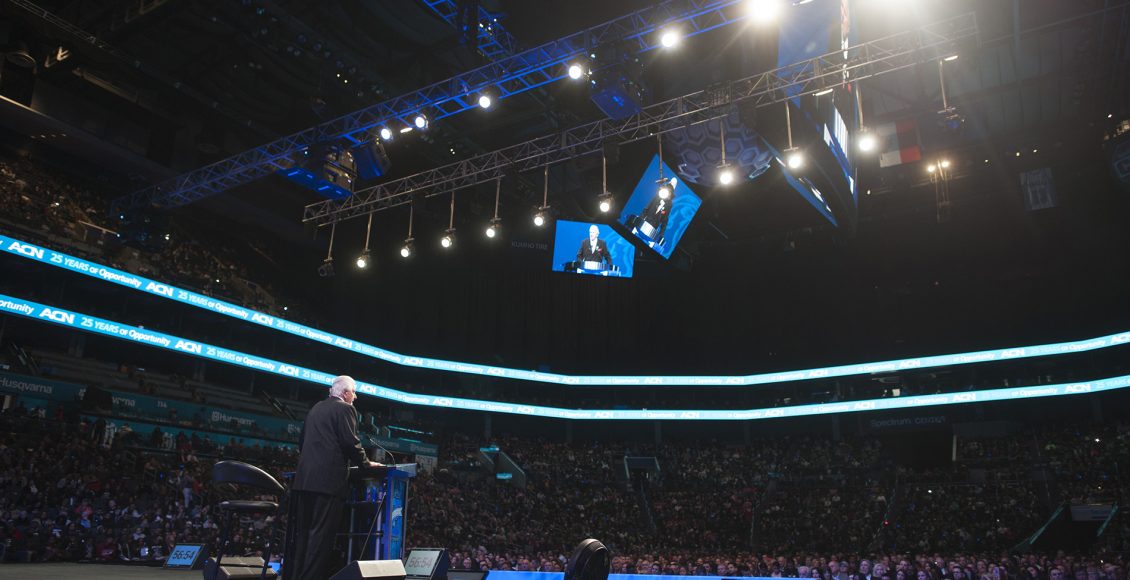 George and Eloise Zalucki are the kind of power couple that run on a clean-burning engine that never shuts off. They are in a constant state of motion, forever evolving and searching for ways to improve their lives and the lives of others. With George as the face and voice of their operation, he has stood on stage in front of audiences of thousands all over the world with Eloise behind the scenes working diligently to make sure his message of motivation reaches the ears of those who need it the most.

In a world with a rising number of life coaches and a vast sea of people looking for direction and answers, the Zaluckis were on the vanguard of the personal development training movement. Long before we understood the stimulus response nature of social media, long before we were influenced by the Internet, these two were traveling around the world training organizations and leaders on how to believe in themselves.

George’s story is one of determination and hard work. It’s a story of resilience, pulling himself up to unimaginable heights to put him in a position to inspire and encourage others to reach their full potential. In many ways, it’s a realization of the American dream in the truest sense.

Growing up in a tenement in Hartford, CT, the trappings of wealth were foreign to George, but his family was rich in spirit. “You know, my dad worked in the factory,” George says. “He was an incredible man. He was devoted to the family and was a good moral man. Very honest. Integrity was the core of his being. We learned that if you want something out of life, you need to get up off the couch, as they say, and go out and get it.” George took these words to heart and his tenacity and entrepreneurial spirit began to manifest at an early age. “I mean, I shined shoes,” he recalls. “Made a little box to shine shoes on the street corner. I delivered newspapers to over 200 people. Rain, sleet, and snow.”

Despite being stricken with polio at a young age, he overcame the disease and went on to become an accomplished athlete. “When I graduated from high school, I was a star in two sports: football and basketball,” he says. “But I had no direction.” All of this changed when he received a personal letter from General Mark Clark at The Citadel asking him to come to play basketball. Being 17 years old at the time, his parents had to sign off on the idea, which they approved. “I graduated in June of 1956,” he recalls. “On July 10 of the same year, I was saluting in the United States Marine Corps on Parris Island.”

After his stint at The Citadel, George returned to his life in Hartford where his life took an interesting turn. While playing basketball one evening at a city gym, he caught the eye of his high school basketball coach, a former professional player for the New York Knickerbockers. “When I came out of the Corps, I was in great shape,” he says. “So, I’m up there running, and he spotted me and called me over and said, ‘Don’t waste it… you’re one hell of a player.’”

That interaction put the wheels in motion for George to eventually receive a full scholarship to play ball for Providence College in Rhode Island. Filled with a desire to learn, he began constructing the building blocks of his career. “I just had this incredible human interest in people and what makes them tick,” he explains. “And I was always an observer of human behavior, so it was in me to follow that.”

After college, he began working for a defense contractor, in what he describes as his first “decent paying job,” when he received a call from the chancellor at Johnson and Wales University in Providence, RI, with an offer to coach basketball. However, the pay would not nearly match his job at the time. Drawn to the idea of coaching, he simply took on more work at the college to make the move financially viable. In the end, he found himself in four different positions simultaneously as the basketball coach, baseball coach, athletic director, and director of student activities.

Being spread so thin did produce some comedic moments. One night he was scheduled to host a student event in the same evening as a basketball game in Boston. As the student event required George to wear a tuxedo, he simply boarded the bus already wearing it, off to coach the game looking like a Las Vegas crooner from the city’s glory days. The stunt was effective in motivating the team and had all the kids “cracking up laughing.” He even made the newspaper the next day in Boston where he was dubbed “The Tuxedo Coach.” It was a time of learning how to be in the limelight and enjoy it while still conveying his message to people to learn, to teach.

George is quick to note that his coaching was not purely athletic. “I motivated them academically,” he says. “I would check up on their attendance and everything. I had a deep interest in the kids. A lot of the them came from disadvantaged families, and they didn’t really get much guidance or mentoring. So, it was important to me if I saw something to try to help them.”

With a proven ability to inspire, George’s phone continued to ring, taking him to other opportunities before finally landing at the Shaklee company, where it’s focus on health and organic products spoke to George. “Great products,” he explains. “I loved the philosophy. It fit what I felt was important.” His enthusiasm was evident in his work because he eventually received a call informing him that he was number one in the company in retail sales.

While selling so much, he still wasn’t making much money. So after hearing about a carpenter who was making $8,000 a month working part time at Shaklee, George approached the man to discover his secret. The carpenter then gave George this advice. “You’re not into networking. You’re not into building. With your background, your fastball is developing people. It’s a business, a multiplication, and if you can build people you can train people.”

This sparked something in George, and he dove into the study of network marketing compensation plans. Due to circumstances beyond his control, he found himself owing $50,000 in a matter of months. That was when it dawned on him. “This can be taught, he says. “And, bing, the lightbulb went on.” With the help of Eloise and some artistic assistance from his daughters, they designed laminated sheets with 22 training aspects that they could travel with to hold seminars.

Just like that, with no money and no credit, George was able to negotiate a brand-new RV that they turned into a mobile manufacturing plant with copy machines and laminators. As a family, they hit the road to teach theses tenets to aspiring entrepreneurs and small business owners. After gaining some traction, they met a man in the video business who was able to add a video to George’s materials, spreading the Zalucki message to an even wider audience.

That small venture is what eventually led to their involvement with the multi-million-dollar enterprise, ACN. Now, George has been able to spread his message of positivity in 21 countries and three continents over the past fifty years. What started as a way to help people grow in the network marketing business has crossed over to help people grow in their personal lives. “I never made it a concern whether they joined [network marketing] or not,” he says. “I was excited to know that I could help people change their thinking to change their lives.”

Of the countless people whose lives they’ve touched, the Zaluckis have also launched many to take up their mantle, a new generation to which they can pass the torch. “We have people that I trained 20, 25 years ago that today are massive personal development trainers,” George says proudly. “They studied me and everything that I did, and they’re out there doing it. I keep saying, ‘Boy, somebody will come along and do it better than me.’ And that’s what we need to build a little army of positivity in this country of possibilities.”

Behind Every Good Man

Any story about George Zalucki would be incomplete without mentioning the woman working behind the scenes to make sure that George’s message reaches the masses, his devoted wife and manager, Eloise Zalucki. An accomplished salesperson and number one networker in her job, she met her future spouse in 1985 when George was brought on to be the vice president of Ava Care, a company that sold cosmetics and skincare products. Working as the area coordinator of the Pacific Northwest region in charge of all sales people within the territory, Eloise describes the genesis of their relationship as “love at first sight.”

She first discovered her propensity for sales while working at Lewis and Clark Caverns State Park in Jefferson County, MT. “I was working in the curio shop, and I could sell anything in there,” she recalls. “The owner loved me, and I didn’t even realize I was good at sales at the time.” As she got older and had children, she found herself drawn back to sales. “I realized that I wanted to do something a little bit more with my life,” she says. “And I really always enjoyed making people feel good about themselves… So I got involved… with Ava Care.”

When George decided to strike out on his own, Eloise was the epitome of a supportive spouse. “I learned how to do things on the computer and software,” she says. “I just did everything I possibly could to try to make him be the best that he could possibly be.” At any of George’s speaking engagements, you will find her working the phones, making travel arrangements, and intermingling with George’s fans and admirers. Although her position may sound like a supportive role, the Zaluckis look at their venture as a partnership. “It felt like the business was really always something that was ours together,” she explains.

As a woman who has experienced such wild success over the course of her career, she hopes to encourage other women to embrace their femininity as they carve out their paths in life. “I’m happy with my life, how it turned out. Because I did make the best of it,” she says. “And I think that women have that power no matter what because we are great communicators. We just need to go more with our intuition.” In closing, she imparts, “Being grateful and having appreciation is one of the most important things because that makes you wake up happy. And if you’re happy, you can affect people in a better way.”

George offers his own affirmation. “God gave us the gift of life…It’s there for a noble purpose, but each of us has to find in our own lives what that more noble purpose is. It may not be a public speaker. It may not be a governor or a president. Maybe it’s the best shoeshine man in the city… whatever it is that fulfills that person by making a positive contribution where they can feel good about themselves.”