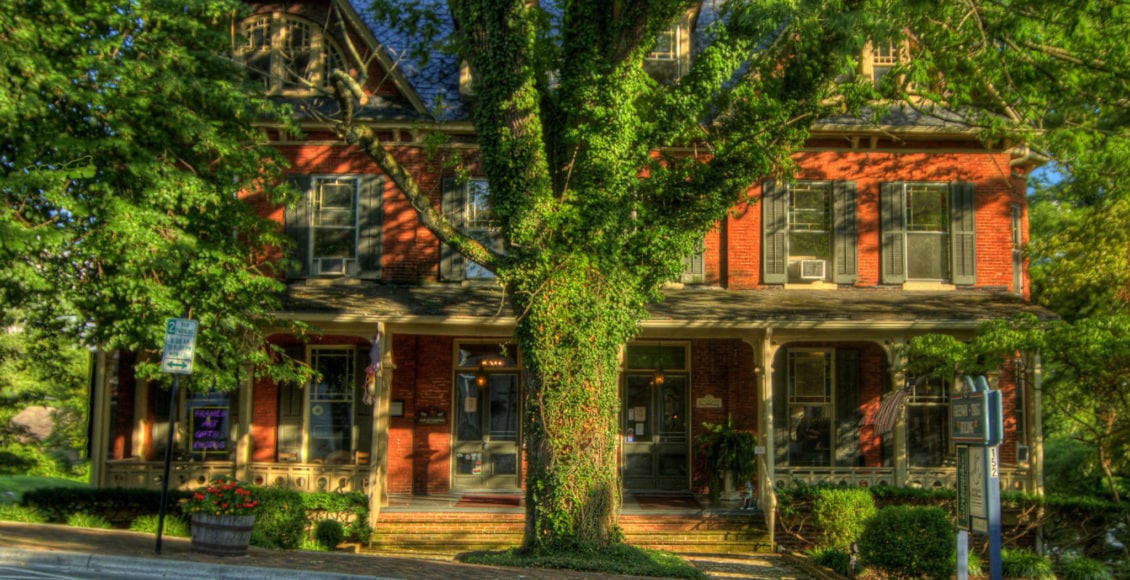 Just about two hours away from downtown Knoxville—a jump on I-40/81 to the northeast—is the wonderfully eclectic, seemingly sleepy but almost fitfully wide-awake town of Abingdon, Virginia.

On at least one trip to Abingdon, you should stay at the Martha Washington Inn, more properly the Martha Washington Inn and Spa. But you shouldn’t call it that. The locals just call it The Martha. And in understanding that one little linguistic tic, you can understand Abingdon. They love the mammoth and elegant Inn as though they each had a share in it.

Their Visitors Bureau will tell you that Abingdon is the perfect intersection of arts, culture, history, and outdoor activities—with all the amenities you’d like. It’s a big statement for a town of a little over 8,000. But it’s not empty braggadocio. They’ve got high-end shops; the best bike trail in this part of the country; 34 locally-owned restaurants; arts galore; the Barter Theatre, an internationally recognized and celebrated stage; Wolf Hills Brewery, producing beers to rival the best of Knoxville and Asheville; and The Martha. In short, they’ve earned bragging rights.

On my second day, a little after a tour of the Barter and an hour or so before listening to a string of stories from a couple of local raconteurs, I ran into fellow Knoxvillians Michael and Vikki Johnson at 128 Pecan, a fantastic little restaurant not far from the head of the Virginia Creeper Trail. After running down a shared list of great stuff we’d found to do, Michael looked at me, shrugged and said, “It’s just a cool little town.”

And it is a cool little town. But what makes it so much cooler than other quaint, small southern towns is its people. While exploring Abingdon, you’ll run into folks who will tell you all about it.

Really, Abingdon is a town made of stories, and full of storytellers. Originally named Black’s Fort in the mid 18th century, legend has it that the town was renamed Wolf Hills by Daniel Boone, whose dogs were attacked by wolves coming from a nearby cave. You can discover what purports to be the entrance to the cave a little ways down from the intersection of Court Street and Plumb Alley. This story is known by everyone in town and they won’t hesitate to tell you a version of it, followed by different family narrative twists (including how many steps removed their forebears were from Daniel Boone himself).

There are feuds going back centuries over what was the first cabin built in the late 18th century, arguments over 19th century loves lost in family conflicts worthy of the Montagues and Capulets, hushed conspiracy theories over just who might have torched a trestle on the Creeper Trail. After hearing these stories from a collection of natives, I began digging for something mildly risqué and scandalous, such is the nature of my curiosity. I ran into a plethora of yarns, many of which were clearly embellished or verging on myth. Some are far too racy or raucous to relate here, but I’m sure you can track some of them down if you visit and venture off the beaten path. As one example, a painting of a modestly dressed woman that once hung in The Martha is rumored to hide a salacious nude on the back of the canvas. As they say, seeing is believing.

Abingdonians also know more contemporary tales, like the origins of the Virginia Creeper Trail, which runs the course of an old railroad line from Abingdon to the North Carolina line. When I arrived, I was scheduled to ride 10 miles of the trail from Abingdon to Damascus with Wayne Miller, president of the Virginia Creeper Trail Club, the volunteer organization devoted to preserving and maintaining the trail. It was raining and had been for hours, but we took off nonetheless, and I did not regret it.

Wayne knows the history of the Creeper from its initial construction as a railroad at the turn of the 20th century to its establishment as a National Recreation Trail in the 1980’s, when Dr. French Moore, the “spiritual father of the Creeper Trail,” began arguing for its public use.

Riding the trail is both a magnificent and an intimate experience. On the longest trestles, you are out in the open, crossing gorges in graceful curves that reveal wide open spaces; at other times, you are riding under overhanging limbs of the kind of trail familiar to anyone from Appalachia.

In April 2011, the rash of tornadoes that caused terrible damage across a wide swath of East Tennessee touched down and took out one of the trestles, originally the longest of 47 along the trail. Visible from the trail is a piece of metal barn roofing embedded in a tree on the Smith farm, a property that took significant damage from the storm. Another trestle was damaged by arson during the initial struggle to turn the abandoned railway into a public use trail. Now, folks are united in their support. It is a great economic driver for the community.

In Abingdon, things happen if you make yourself available. It’s similar to that moment in learning photography, when you discover that the first rule of taking pictures of a city or landscape is simply to be outside when the light is right.

As I lunched at 128 Pecan, I entered into conversation with local personages Jan Hurt and Jack Barrow, chef and owner of the restaurant, who greeted me by asking if I had gotten good pictures of the peonies. Turns out he had seen me in a culvert, early in the day, shooting up at the flowers next to St. Thomas Episcopal Church. It is a very small town. The talk was wide-ranging across a number of topics, including the retelling of some standard stories. But they were not hesitant to tell their own, and give me a short list of what else to see, what other roads to go down. And in going down them, you’ll meet other storytellers and find treasures new and old.

A fairly new spot in town is Wolf Hills Brewing, housed in a warehouse building that is inviting and warm. From the tapwall, I can recommend Wes’s Wheat, For Science IPA, and Sinking Spring Pale Ale. An evening features great food trucks and personable people. It was there that I had an engaging conversation on art and politics with Carly Booher Edwards, featured on mandolin and vocals with Annabel’s Curse, a band that performs regularly in Knoxville.

Though the building (at times a Presbyterian church, Temperance hall, dtown hall, and fire station) has stood since 1831, the Barter isn’t simply a venerable theatre hosting large productions. On Stage II of the Barter, largely an experimental theatre, I had a chance to see a new play making its premiere. The following day,
I heard the long and fascinating story of the Barter’s history as delivered by Katherine Foreman, major gifts officer at the theatre. When the theatre was established during the Great Depression by Robert Porterfield, the entrance fee was often paid in dairy, livestock, and produce: barter. And thus its name. A look at walls full of pictures gives testimony to the sheer volume of acting, writing, and directing talent that has come through and been nurtured by the theatre. It’s a great story, one I wish I could tell in full here.

Wonderful stories abound in Abingdon. The highlight for me, however, was each of the narrators I encountered at each establishment, trail, and alley. At one stop, a new storyteller friend asked my age. I told him. He said, “Well I’ve got a little more than 20 on you. I’m 74. You live those 20 years well, ok? Love well. Go places.”

A Jewel Shines in Bearden