An Overreaction in Battling Bullies 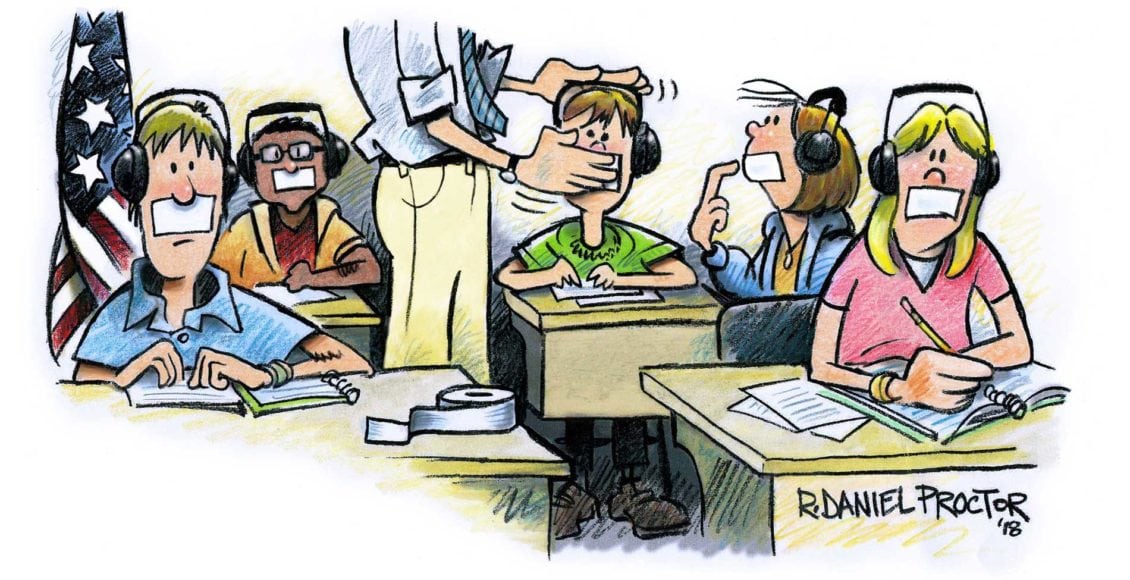 For every action there is a reaction, and in the public arena an emotional reaction often achieves a policy overreaction. Bullying in schools is just such an emotional subject.

It seems an easy call to demand officials “do something” about bullying: it’s ugly, brutal, and immoral.  More difficult is drawing the line between appropriate steps to stop dangerous bullying versus descending into a quasi-Orwellian world of trying to subjectively codify virtually every student interaction.

Union County middle-schooler Keaton Jones became a momentary star on the state and national anti-bullying stage when a video went viral of him tearfully talking about bullying at his school. “Why do they bully? What’s the point of it?” he asks on the video.  “They make fun of my nose, call me ugly, say I have no friends….”

Athletes and celebrities met with Keaton or took to Twitter with encouraging tweets. Union County Schools Director Jimmy Carter said bullying was not tolerated and that administrators must provide an academic environment that’s “safe, civil and supportive.”

Just about everyone has a personal bullying experience. One vividly in my memory occurred at Walled Lake Junior High School in Michigan. A new kid, I horsed around one day in shop class with two guys I thought were friendly. They weren’t.

They harassed me constantly. One day, while changing classes, they followed me, pushing me, calling me names, and laughing.  I was a smallish stranger in a strange school: outnumbered, and scared.

I went to see the vice principal. From his outer office I could hear him talking – loudly – to a student: “When I was a year older than you I was in a foxhole in Korea!”

My complaint suddenly seeming pathetic, I left.  The next day, in the lunchroom, the two started again. I stood up and shoved one of them.  “OK,” I said. “Here. Now.”

‘“After school,” he replied. I pushed him again, repeating, “Here. Now.” On my right, his somewhat overweight friend moved toward me. I looked at him and said, “Hold on, fatty. Your turn’s coming.” I turned back to the other boy.

We didn’t fight and neither of them bothered me again.

I recall being a little proud that I’d stood up to them. Together they could have pounded me into oatmeal. But they backed off. Not all bullies do, adding to the calls for someone in authority to “do something.”

For example, Knox County’s anti-bullying policy against harassment, intimidation or bullying says – rightly – that prohibited behavior includes physical harm to a student or property and knowingly placing a student in reasonable fear of harm to themselves or property.

The policy’s next three points can be problematic: “Causing emotional distress to a student or students; or “Creating a hostile educational environment; or “If the act takes place off school property or outside of a school-sponsored activity, it is directed specifically at a student or students and has the effect of creating a hostile educational environment or otherwise creating a substantial disruption to the education environment or learning process.”

The breathtaking expanse of interpersonal on and off-campus situations the policy covers demands that Big Brother must be always watching. School employees are told to be on the lookout for signs of…anything suspicious. A series of investigative and administrative steps follows a complaint.

Defining “emotional distress” and a “hostile environment” is the challenge.  For example, I have asked at various times in various forums if it’s bullying for a student to say “I think homosexuality is wrong” to a student who says he or she is gay.

A number of people have said, yes, that is indeed bullying. Therefore, if a non-believing student says to a religious student, “I think you have a screw loose,” can they claim emotional distress? Does that constitute creating a hostile educational environment?

Think it can’t happen? Who would have thought that the diversity and inclusion movement would result in such a broad swath of what people are told they mustn’t say.

True bullying is serious.  Some kids can be vicious. But also a problem are well-meaning or self-protective policies and surveillance that can wrongly accuse or identify a child as a bully, or put school officials in positions in which they shouldn’t be placed.

For every action there’s the possibility of overreaction, and we’re seeing it unfold, a little more, every day.