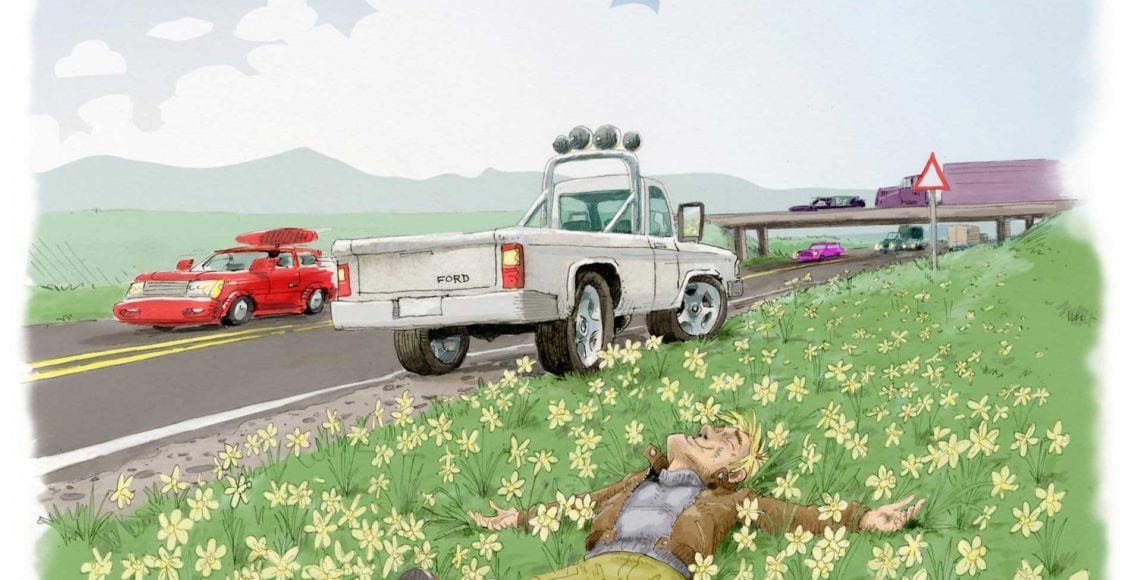 Whenever I take an early spring drive from Rockwood to Oak Ridge, I am overwhelmed by the daffodils on Pellissippi Parkway. Daffodils always complement redbuds and dogwoods. But I think it’s gotten a little out of hand. Does every square inch of roadside from Topside to Solway really need a daffodil?

It’s uncertain whether that many flowers need to exist, but many of us are certainly glad they do. The source of your distress cannot simply be the proliferation of beauty on what had been a dull stretch of roadway. That’s a grim way of viewing life. Perhaps you find them distracting?

While it’s understandable that such an immense display of flora could be initially seen as distracting, the Knoxonomist celebrates this as part of the poetry of East Tennessee. Having awoken from the slumber of a short, gray, rainy, and chilling winter, the first splashes of color illuminate the landscape. It is both a celebration of spring and a promise of things to come.

And while the road itself is a racetrack, the Knoxonomist doubts that any floral rubbernecking would make things worse. Indeed, the bounty of blooming bulbs, extending into the millions along the Parkway, keeps the driver from having to turn his head to see this or that part of the garden of delights. It is constantly before him.

The true problem appears to be those who stop and smell the jonquils—or, more pointedly, who stop to photograph themselves and their friends and families alongside the blooms. The median and shoulders of the road are not made for sightseeing. It is unsafe and illegal to get out of the car there and shoot the scene. Find a side-road or a place where you can get good and beyond the shoulder and take your pictures there.

When Maria Compere of Knoxville first began the planting nearly 30 years ago, the Knoxonomist was living near campus and focused on his studies and certain extra-curricular activities. Since he and the family moved to where they’d travel the Parkway regularly, however, their lives have been enhanced and enriched by the beauty.

“Every square inch” might not need a daffodil, but our spirits wouldn’t be the worse for it.

Have a question you’d like the Knoxonomist’s perspective on? Send them to TheKnoxonomist@cityviewmag.com.