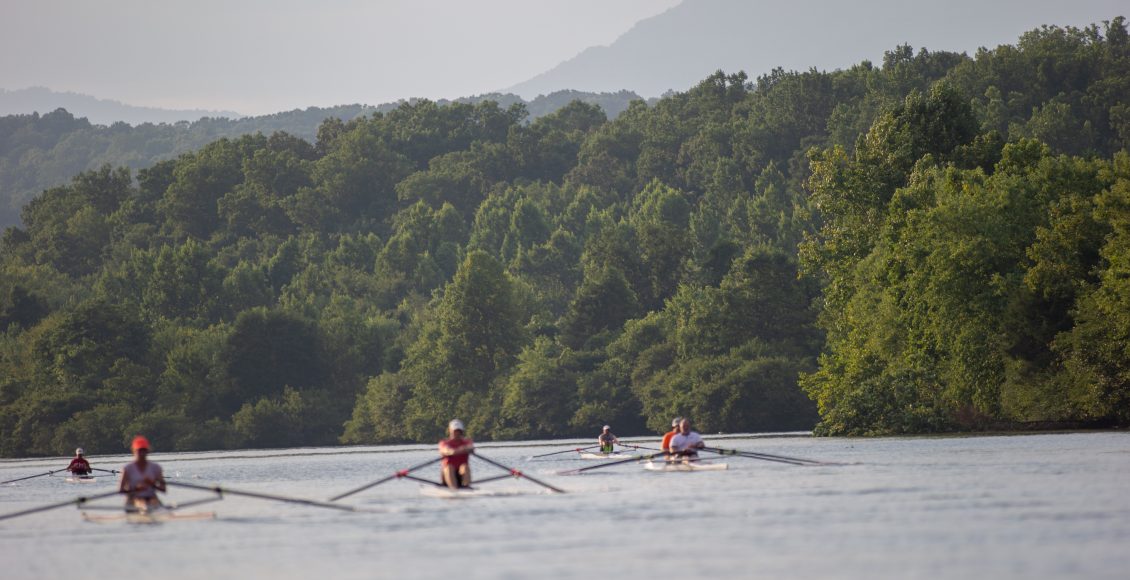 Several years ago, I had the opportunity to row a “double” with Olympic silver medalist Tom Kiefer. I was relatively new to the sport; needless to say, I was intimidated and nervous. As we got into the boat and strapped in our feet, Tom turned around and said, “I hope you’ll be patient with me. I’m still working on my stroke.” That consistent pursuit of the perfect stroke is one of the things that makes rowing such a satisfying sport.

Some people think that you have to have rowed in college to continue to enjoy it, but many people come to rowing as adults. I began rowing in my 40s. I didn’t really like running and my knees were starting to complain. I worked out with a trainer at the YMCA who was a former collegiate rower. He looked at me and said, “Have you ever tried rowing? Let’s get on the rowing machine. It’s the best aerobic workout around and there’s no impact.” Fifteen minutes later, I was exhausted, a little nauseous, and completely hooked.

Rowing is a full-body sport that will get you in the best shape of your life. Power in rowing is generated by the large muscles in your legs and glutes, your core is fully engaged throughout the movement, and the lats and arms “finish” the stroke. “Erging” (on a rowing machine) burns more calories than running, since all muscle groups are engaged.

A major theme in the book The Boys in the Boat is the camaraderie and the feeling of teamwork when a crew achieves “swing” (all rowers moving in perfect unison). We’ve all been in business meetings where we’ve heard about teamwork and how important it is that every member do his or her part. In an eight-person rowing shell, this is literally the case. Unless everyone is rowing at exactly the same rate, with the same power, the boat doesn’t go forward. And each seat has a specific job: From setting the cadence (the stroke seat), to providing the power (the middle seats, or engine room), to keeping it all together (the bow seat), everyone is essential to moving the shell across the water.

There is nothing more thrilling than feeling the shell pop up on top of the water, hearing the bubbles underneath the shell as you and your crew move the boat along faster and faster, gaining on the competition as you go. Eight-person crews can generate a tremendous amount of power and speed: the Stanford men’s eight pulled a water skier for 54 seconds.

One memory that still makes me laugh is from a race in California called the San Diego Crew Classic. Our crew of eight women and our coxswain were racing in this 2,000-meter sprint, which is twice the distance of the standard masters’ race, so it’s challenging. Moreover, it’s held in Mission Bay, where the stiff breezes and waves from the ocean make it difficult. Crews that compete in this race must be physically and mentally tough.

Our crew trained for almost a year, doing longer and longer distances in adverse conditions. Our coach waited till just the moment after midnight to make the entry so that we could get a good lane, furthest away from the stiff ocean breezes. We felt good about our chances.

As we lined up with the other crews for our event, we looked at the crew to our left and noticed the women looked familiar. We quickly realized we were racing against the 1980 US Women’s Olympic team. We grinned to each other and said well, we know they’ll beat us but let’s make them work for it. Everyone in the boat laughed, and there was a great feeling of excitement. In what other sport can you sit at the starting blocks knowing that you are going to lose, and also knowing that you’re going to have a heck of a good time anyway?

We rowed the race and we did make them work for it and they did beat us, of course. We pulled our shell onto the beach and saw two little boys. One of the women in our crew had her sons there; they were 8 and 10 years old. There were tears rolling down their little faces. They said, “Mommy, Mommy, you lost!” My friend Kristine looked at them with a smile and said, “That’s okay, boys, you win some, you lose some. They were a really great crew.” The 8-year-old looked up at her and said, “But Mommy, you lost by a lot.”

There are some basics to understand in any sport. Rowing with two oars, one in each hand, is called sculling. Sculling boats are built for one, two, or four rowers. We’ve all seen the commercials that show a single sculler peacefully rowing under a bridge.

Rowing with one oar is called sweep rowing. Sweep boats are built for two, four, or eight rowers. We’re most familiar with the cartoons of the eight-man shell and the coxswain in the stern shouting “Stroke! Stroke Stroke!” Today’s coxes don’t use megaphones; the shells are rigged with speakers.

How to get started

There are two rowing clubs in the area, the Knoxville Rowing Association (knoxrowing.com) and Oak Ridge Rowing Association (orra.org). Both offer learn-to-row classes. Right now, COVID-19 means that classes are being taught in single sculling boats. This is, in fact, a very good way to learn good rowing technique, as your body movements give you immediate feedback and help you learn to “set,” or balance the boat.

At the FISA World Masters Championship in New Jersey, I was riding the shuttle bus to the rowing venue for practice. I sat next to a man who looked like he was about 85 or 86 years old. He had on his rowing gear and was clearly headed to the race course as I was.

I said, “It’s so wonderful that you are still rowing!” He looked at me with a twinkle in his eye and he winked and said, “I do it for the women.” We both laughed, and it was a great day.

This man rowed his single down the race course on a race day and everyone standing on the bank of the lake applauded him all the way down.

Later that night at the hotel, I walked past the bar and that same man was at the bar surrounded by women who were all patting him and teasing him and buying him drinks. I said, “You weren’t kidding, were you?” He grinned from ear to ear and said, “I told you. I do it for the chicks.”

Karen gained her appreciation for timeless style as a buyer within the opulent walls of Brooks Brothers in New York, but today she can be found writing for Cityview about fabulous homes in Knoxville. When she isn’t covering the elegance of old-town Knoxville, she can be found at the Symphony or Orchestra.