Local cavers explore a stunning world few of us get a chance to see. 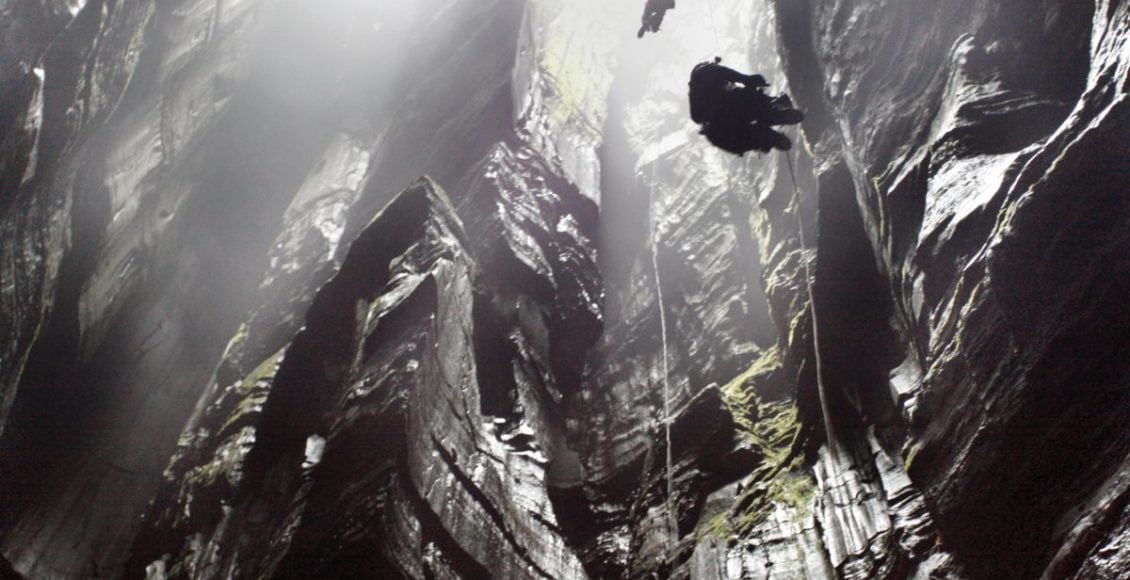 Led on by clues pointing him toward interesting species of cave dwellers, Nick Gladstone got separated from the rest of his party. Then he stepped on the wrong rock. “I guess I didn’t test it as well as I should have,” he admits. The rock slipped, and his ankle got wedged. Then his bodyweight swayed in the opposite direction and he heard his bone snap in the dull silence of the cave. “You’ve never experienced fear until you scream as loud as you can and no one hears you. All you can hear is silence, and maybe some dripping. Sound doesn’t carry as much as I thought it would in a cave,” Gladstone recalls.

Nor did he realize how far he’d actually gotten from his party. After screaming for about fifteen minutes, Gladstone realized that he was wasting his energy. He turned his headlamp off to conserve battery while he collected his thoughts. After about twenty more minutes, he made a decision. “I realized I just had to suck it up and get going. So I went out as I came in.” Nick dragged himself over six-hundred feet through tight, zigzagging spaces on jagged, unforgiving rock and cold wet mud.

I learn all of this while we plan a caving trip. For him, the lesson was not, “Caving is dangerous and should be avoided.” It was, “That’s what knee pads are for.” Instead of quitting, Gladstone is now a teaching assistant and first year grad student at the University of Tennessee, and he gets paid to catalog the biodiversity (the variety of species) in Tennessee’s caves—sometimes with undergrads and high-schoolers in tow.

If cavers persevere through incredible difficulties, it’s for the often immense rewards. Cavers explore parts of the earth that perhaps no person before them has ever seen. They often meet striking beauty that can’t really be transmitted, but only experienced firsthand.

“It was below freezing when we entered the cave,” says Jessica Preston, a geologist, recalling her first time caving in East Tennessee. Once inside, they immediately delayered. It was a balmy 58 degrees. “Some caves can be very breezy, but that cave was very hospitable,” she says. Golden birch leaves were strewn all about the entrance. She repelled down a 30 ft. drop and began to move through a wonder of steep formations of dolomite rock. “Most of the caves I go to in the South are in limestone, and the way that this one was formed was so much different. It had really large formations and multiple drops, and it had not been visited a lot, so it still felt very pristine, like we were the only explorers that had been there.”

The Appalachians and Interior Low Plateau (which make up roughly 70 percent of land cover in Tennessee) are replete with limestone and dolomite rock. “These are carbonate materials that dissolve once rainwater rips through them long enough, and they form these channels,” Gladstone explains; “That’s where caves are.” As relatively simplistic, closed ecosystems, caves happen to be an excellent place to study ecology and evolutionary biology. And Tennessee is home to the highest levels of subterranean biodiversity in North America. “Many of the species that I’m looking for might be endemic to one cave, meaning that’s the only place they live, and that’s it,” he says.

It was the Berry Cave salamander—which only lives in Knox, McMinn, and Roane counties—that spurred Gladstone to enter his first cave. He read a book about this flagship amphibian, wrote to the author, and soon found himself on an adventure with him. “He told me to bring a wetsuit, kneepads, headlamp, helmet, all that good stuff, of which I had none.” Once there, they entered a slow-flowing stream that came just above their ankles. The passage slowly shrunk, and they began crawling. “You’re on your hands and knees, chest-deep in water, and it just opens up into this huge room.” They got some pictures of salamanders, and Gladstone’s host taught him how to get through a cave without getting wedged into a wall. “It was extraordinary and made me want to keep going.”

In addition to bizarre creatures, stalagmites and stalactites, mansion-sized rooms carved by seeping water over millennia, the incredibly earthy smell of caves makes peated Scotch seem pedestrian. “It’s so unique,” says Preston. “There’s this sense of earthy, muddy odor that’s not biologic. It just smells like really good mud.” There’s not much airflow in caves, so dust particles tend to stagnate in the air. Gladstone adds that, “There’s a fungal pathogen in just about every cave system in Tennessee. It’s associated with  white nose syndrome, which is one of the leading causes of bat population decline in North America. That might partly explain the weird smell.”

Unfortunately, white nose syndrome has become a divisive issue among cavers. In order to keep the pathogen from spreading, cavers are supposed to hose down and bleach all of their gear before going from one cave to another. Yet many who don’t understand the impact of their actions choose not to make the effort. And some who do understand their impact don’t feel comfortable with, for instance, repeatedly bleaching a rope that their life depends on.

“It’s not very advantageous to us as scientists, or people that care about these systems in general, to publicize the location of any particular cave,” says Gladstone.  About 90 percent of all caves in Tennessee are on private property. “We don’t want people to know where caves are because there’s a higher probability of them intruding on private property and spreading this fungus.”

In addition to protecting landowner relations and avoiding the spread of white nose, there are other reasons cavers keep locations tight to their chest. Anyone who spends time in Tennessee’s caves will undoubtedly witness somebody’s thoughtless disrespect. Graffiti and trash are only the tip of the iceberg. Many visitors smoke, light fires, toss dead batteries into streams, or throw mud balls at walls and ceilings—which will likely never be cleaned. Preston says, “I’ve seen evidence of people having hurt bats, which really gets me crazed.” Some even destroy or remove stalactites, stalagmites, and other rock formations. “Unlike aboveground resources, caves don’t recover very quickly,” she says.

Protecting caves sometimes requires a bit of chutzpah. When Gladstone broke his ankle, his friends told him to “stand there and look pretty and make sure that the landowner doesn’t think that anything bad happened so we can come back.” He explains, “No one who owns that kind of property wants to learn that someone got hurt there.” “It was great!” he told the landowner, stifling his urge to cry out in pain–just grinning through it.

“I hit my head so hard I blacked out for a few seconds, and then I had an incredibly severe concussion. My eyes were crossed, I was nauseated, I had trouble walking. Under normal speed, we were 45 minutes from the entrance. But it took us about four hours to get out.”

Getting injured on someone else’s property can have some pretty severe consequences for cavers. But Preson does  not consider injuring herself or not being allowed to return as the worst of them.

“When you’re caving, decisions you make don’t just affect you. They also affect those who might have to come in to help you,” she says. “And you could easily get hurt if you don’t have the proper equipment. Then you put everyone that’s coming to get you at risk of getting hurt or killed.”

Once while deep into a cave, her party came across a young man wearing blue jeans, tennis shoes, a bike helmet and a junky headlamp. He was cold. He’d gotten separated from his friends and was now lost. Preston’s group led him back to the entrance pit where they’d repelled in over 200 feet, and where they now needed to climb  back out. The boy’s party wasn’t there, but their rope was: a dangerous strand that was poorly rigged. “They had it in a bad spot where there was a fairly rough edge to it.” The boy’s friends managed to find their way back, probably because they’d heard Preston’s group. The boys were all cold, poorly dressed, without enough light, and with no food or water. “They were preparing to climb out on their rope. My friends and I convinced them to climb out on our rope because theirs would have fallen. They were actually on drugs. One guy was definitely on meth. They were way messed up.”

Needless to say, this is a recipe for disaster. If you want to be prepared, you’ll of course need to be sober. You’ll also want want a good climbing-style helmet with a chin strap, not a bike helmet. Preston recommends wearing technical gear, and polypropylene long underwear with running shorts and a long-sleeve running shirt. Always take in a lightweight jacket in case you’re sitting and get cold. Food and water are critical. Pack what you’d need for a typical day of hiking, and fine tune as you continue caving.

You’ll need at least three sources of light: two headlamps and a flashlight, plus spare batteries. “You also always want to have three call-outs: three people that know where you’re going, and approximately when you think you’ll be out,” says Preston. “That way those people can call and get help if they don’t hear from you.” You should also cave with at least two other people. Preston says just remember the rule of threes: “three sources of light, three-callouts, and three people in your party.”

Gladstone says, “I had no idea that this was going to be the thing that I was interested in up until I did it.” His life lesson is: “Be adventurous; try new things. Go underground and risk your life a few times. You might like it. You might even make it a job.” Just remember to wear knee pads, and always test your step.

Home is Where the Art Is