Home is Where the Art Is

The Ever-Evolving Artistry of Robert Tino 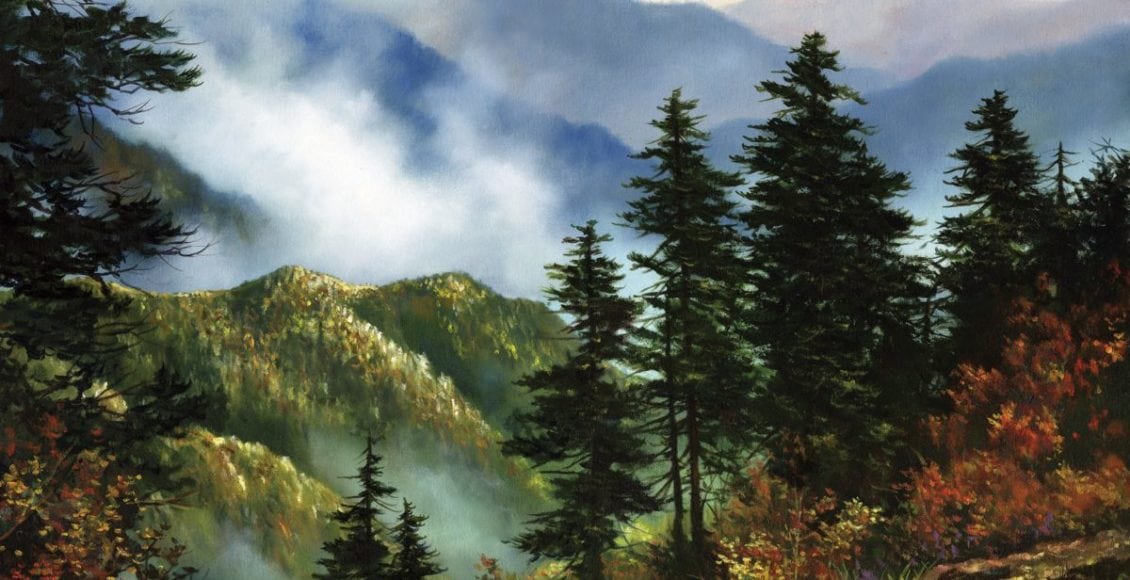 Each issue, Cityview features a local artist—there is no shortage. We celebrate one painter here, but Knoxville embraces a wide range of artists working in almost every conceivable medium. Museums, studios, and exciting art programs at local colleges and universities showcase this cornucopia of talent. A sizable number of artists have stayed or returned moved to East Tennessee, making it their home—committing to the beauty, bounty, and boundless creativity of the region. Knoxville’s artistic community is flourishing and developing in new ways. With his own ever-evolving work, Robert Tino is exemplary of this continued transformation.

From the time he was born in Bristol, Robert Tino was moving. After a year there, the family moved to follow the career of his father. Fourteen years went by in a blur of towns—then the Tino family landed in the Great Smoky Mountains where Robert found something he’d never had before: home. When his family packed up to move again, Robert stayed as a house guest with the grandmother of a school friend.

Once Tino found his home, he never left again. He never left that school friend, Mary John Denton, either. They married, had two children, and opened a gallery in her grandmother’s old home. The gallery, now listed on the National Register of Historic Places, is recognized for the craftsmanship of a century past. It became the foundation for an artistic legacy. The Smoky Mountains are both home and the basis of his artistic vision and profession.

Tino started painting at the age of 12, and at 13 sold his first work of art. He sold the tempera painting of a ship to his father’s co-worker for $15. Decades later, after Robert Tino’s paintings had found homes across the globe—in Australia, Germany, Switzerland, Russia, China, Japan, and elsewhere—his father’s former co-worker came to the gallery, still the proud owner of the first work Tino ever sold.

His artistic career was launched by his older brother, whom he’s always regarded as a good artist. “I stole his pastels,” Tino recalls. He has since moved from pastels to acrylics to watercolors to oils. His art was his thanks and sings praises to the mountains, put down on cavas in serene layers of color. Sevier County embraced its new son, supporting his art at area fairs, shows, and festivals.

As a UT student in business and political science, he issued his first limited edition prints. Later, Mary John saw that Robert was content to stay home and be a great father. So she “kicked him out of the house” to build a studio. “She’s always been a truthful critic,” he says. But she describes her role as creating the magic and ambience that sustains him and the gallery.

In 2002, Tino began exploring a new style. Tranquil mountains were replaced by abstract swashes of color in Tino’s aptly titled painting of a bear, “Things Have Changed.” Layers of modeling paste and glazes were set off with textured strokes of the palette knife. The bear marked a departure in style, representative of a continued artistic restlessness to explore new forms. “The abstraction is freeing. It’s art for its own sake,” he says. Mary John recalls that one of his devoted collectors who always showed up to buy the first print was a bit shocked upon seeing it. He added it to his collection and lovingly remarked, “Tell Robert not to do that again.” Tino half whispers to himself. “I wish I’d kept that original.”

Tino expanded to a second gallery in Highlands, N.C., open from 1999-2009 and starting again in 2013. This year, however, he is closing it for the final time and moving everything back to his Sevier County studio. “We’re concentrating on new opportunities here,” he says.  Tino is looking to explore new subjects and work with new materials. He’s filled with inspiration from his favorite Smoky Mountains spots, from old photographs, and, as you can see on our cover, Knoxville itself. Even a Walmart trip to stock his daughter’s dorm leads to a stop at the spray paint section. “Dad? Spray Paint? Why?” his daughter asks. He replies, “Colors! I want to see the colors!”

Even after many years pursuing his vision, Tino is still challenging himself. He’s producing commissions and 40 to 50 additional paintings a year. “I need it to be more than just another painting—to express my identity, to answer the questions, ‘How is this new? Does it have ‘Wow?’” With one of his latest commissions, Tino is devoting a year to complete a large-scale, abstract work for a collector whose only direction is that she likes Jackson Pollock. Like the bear that so often finds a home in Tino’s works, the artist himself is happy and free to pursue his own way.

As art critic Michael Welton writes: “Up-and-coming Knoxville, Tennessee, is striving to prove that great art doesn’t grow only out of urban Meccas.” Downtown Knoxville has become an artistic showcase, hosting a First Friday celebration of the arts that brings thousands downtown to explore galleries small and large as they present both established and up-and-coming artists. The visual arts are vibrant and alive in East Tennessee.