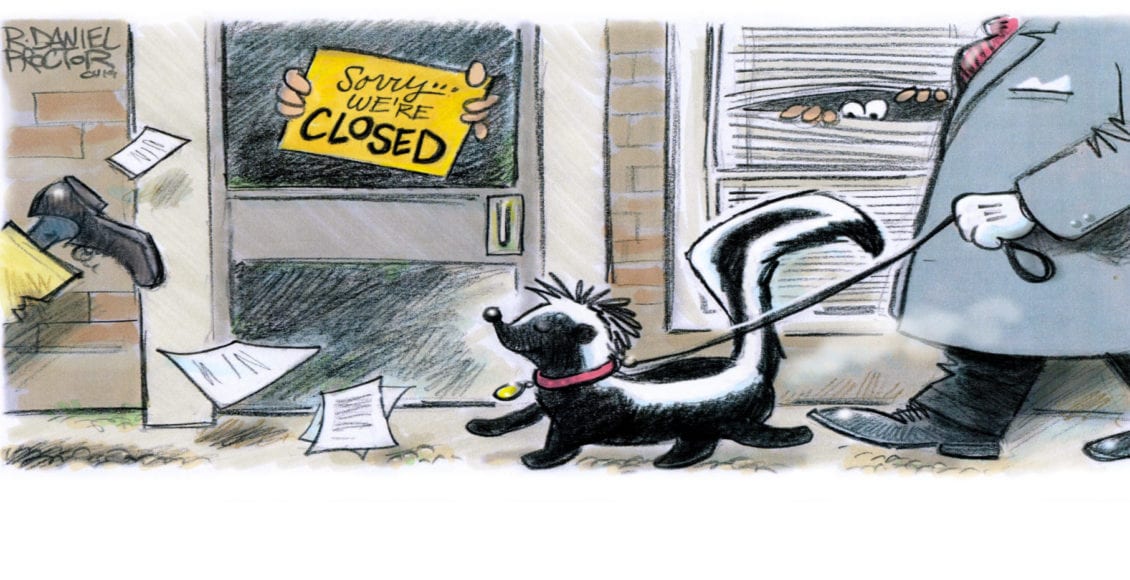 The stench of a property tax increase can not be ignored

There are three reasons why city and county leaders typically flee property taxes like a skunk chasing them down the street: property owners hate them, voters hate them, and they don’t want to look bad over a hated tax, particularly if the other government isn’t raising theirs. Pride or competition, it’s a factor, even if unstated, in budgetary considerations.

Ronald Reagan, 40th President of the United States, famously said: “Actually, a government bureau is the nearest thing to eternal life we’ll ever see on this earth.”

A tax is even harder to kill. Take the property tax, please. There is something smelly about the government being able to raise taxes on people’s homes, and then, even if the property owner has paid off their loan, have authority to take their home if the owners can’t pay their property taxes.

“Property tax, one of the most criticized taxes on U.S. residents, stems from a system put in place by William the Conqueror,” said Atlantic magazine. Duke William of Normandy received his informal “Conqueror” title by boating over from France in 1066 and conquering England, after which he devised a property tax for his new subjects.

“Property tax, surveys find, is the most hated of all taxes,” the article said. “Why is it, detractors say, that you have to keep paying the government on something that you own—forever? Or, in the words of one protester on YouTube, property tax is “oxymoronic, unjust, and un-American!”

Such attitudes are a reason outgoing Knoxville Mayor Madeline Rogero and rookie County Mayor Glenn Jacobs wanted to go out and come in with the same goal: no property tax increase in their respective budgets.

Among the factors that figure into budget deliberations are how a tax increase will politically affect the administration proposing it and the city council or county commission that must approve or reject it. If legislative body members desire re-election, or moving on to other offices, a property tax increase in their history isn’t a plus.

You would be hard-pressed to find anyone in government who says that thought never crossed their mind. It has impact. Maybe a lot, maybe a little, but it’s there.

Politics is a perception game. If the city raises taxes and the county doesn’t, the perception is–fair or unfair–that the county is doing a better job managing its finances. And vice-versa. If one hikes taxes and the other doesn’t, the higher the amount, the worse the comparison. It’s much easier on everyone in elected office if both governments raise property taxes at the same time.

There’s a political saying, also attributed to Reagan: “If you’re explaining, you’re losing.” City or county mayors, council members, or commissioners don’t want to have to explain to aggravated constituents why they had to raise taxes, but the other government didn’t. Despite the justification some taxpayers will think it untrue or will view it, as English poet and playwright Oscar Wilde does, “The bureaucracy is expanding to meet the needs of the expanding bureaucracy.”

The best time to raise property taxes, if it’s going to be done at all, is early in an administration. It gives voters time to forget, and voters’ memories can be stunningly short.

Rogero, however, flouted this conventional wisdom with a 34-cent property tax increase in 2014, the year before she ran for re-election.

In her favor was that the increase wasn’t in an election year, that serious candidates typically don’t want to put money and effort into challenging an incumbent, that Knoxville’s core is increasingly Democratic (as is Rogero, though city mayors run non-partisan), it was the first increase in 10 years, and an ever-decreasing number of people pay attention to city government and vote in city elections.

That doesn’t mean property tax heat is off. Jack them up a couple of times and watch how much renewed interest people take in city government.

Competition between the two governments, to whatever degree it’s in play, to avoid tax increases helps keep taxes under control–and keeps the property tax skunk from stinking up the place.