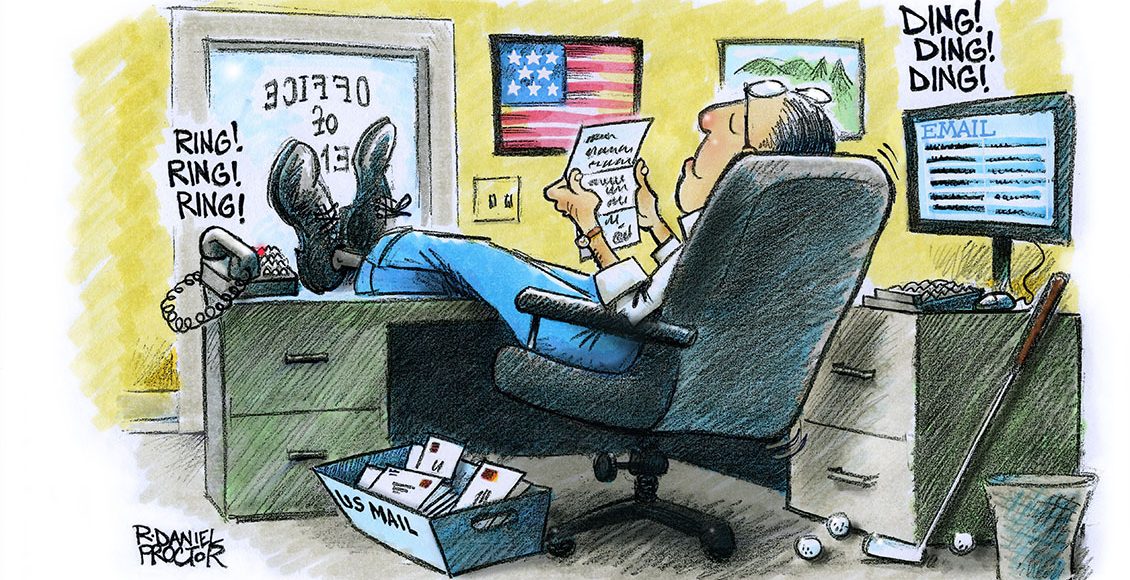 Politicians notice the rare letter that lands on their desk

“Mr. Postman,” (said the politician), “look and see, is there a letter (from a constituent) in your bag for me?” Politicians may not sing it like the 1960s group the Marvelettes, but it’s what they want to know.

Political leaders have received letters from irate, happy, or questioning citizens for as long as there have been politicians. In the information age, when ‘send’ buttons can immediately deliver hundreds, or even thousands, of messages to officeholders, letters have not lost their value, and in some cases may be more influential than ever.

The evidence is in your curbside, U.S. Postmaster General-approved mailbox. When you pull mail from your mailbox, it’s probably mostly circulars, bills, and various forms of junk mail. An actual letter in the mailbox, one personally addressed, with a postage stamp, is invariably opened first. Someone took the time to put their thoughts on paper, enclose it in an envelope, and physically send it to you. That matters.

It matters to elected officials as well. The personal touch of a written card or letter has a greater impact than another “ding” when the latest e-mail drops into their inbox. However, the higher up the political food chain you go, the lighter the effect becomes.

At the federal level, the chances of your letter, e-mail, or fax being seen by a U.S. senator or representative may be equal to winning the lottery. Twice. For example, there are about 4.2 million Tennesseans over age 18. If only one-half of one percent contact their Washington representatives daily, it means about 21,000 communications are received collectively each day by Tennessee’s two U.S. senators and nine House members.

Such contacts have accelerated in the President Donald Trump era. For example, New Yorker magazine said that in the weeks after Trump’s inauguration, record numbers of e-mails, faxes, phone calls, and letters arrived on Capitol Hill: “One Republican senator received, from a single Web-based faxing service, 7,276 of them in twenty-four hours.”

Lower-level staff members survey the incoming messages. Constituent service goes in one pile; the political piles are segregated into favorable, unfavorable, unsure, or however subjects are divided. The senator or representative can view a graph to see how constituents feel about an issue. What can make a letter, particularly a handwritten letter, stand out is that there are fewer of them than faxes, phone calls, and e-mails. That helps increase the possibility of being noticed, even in Washington.

At the state and local levels most people wouldn’t know their elected representatives if they were asked to identify them in a police lineup. State and local offices don’t receive remotely the same attention as the federal government. When they are being noticed, it’s usually only when there’s a crisis or controversy afoot. (In 2014, for this column, some 15 people were asked to identify their county commissioners or state legislators. Only one knew the name of one of his two Anderson County commissioners.) Such lack of awareness creates opportunity for a letter writer. It doesn’t take many calls, faxes, or e-mails to get a local politician’s attention.  It indicates people are at least interested enough to send something. Often, county commissioners or city council members consider it a torrent if an issue generates a half-dozen contacts, with letters and phone calls highest on the effectiveness list.

Unless a caller has a personal relationship with the officeholder, personal letters, as mentioned, stand out more. But there are unwritten rules: the angrier the tone or the more insulting the wording, the less likely letters are to be considered representative of larger numbers of voters, or to be taken seriously to any degree.

Of course, these general letter-writing rules go out the window in a short-fused, we’ve-got-to-make-contact-right-now environment. In such situations it’s as many messages as can be sent, as fast as they can be transmitted.

With respect to how letters, e-mails, phone calls, etc., are handled by elected officials’ offices, bear in mind that it’s very unlikely they’ll admit that they give one type of communication more weight than another. However, they do, because of the same allure that emanates from a personal letter in your mailbox.

Therefore, if you really want to reach out and touch an elected official, sit right down and write a letter.