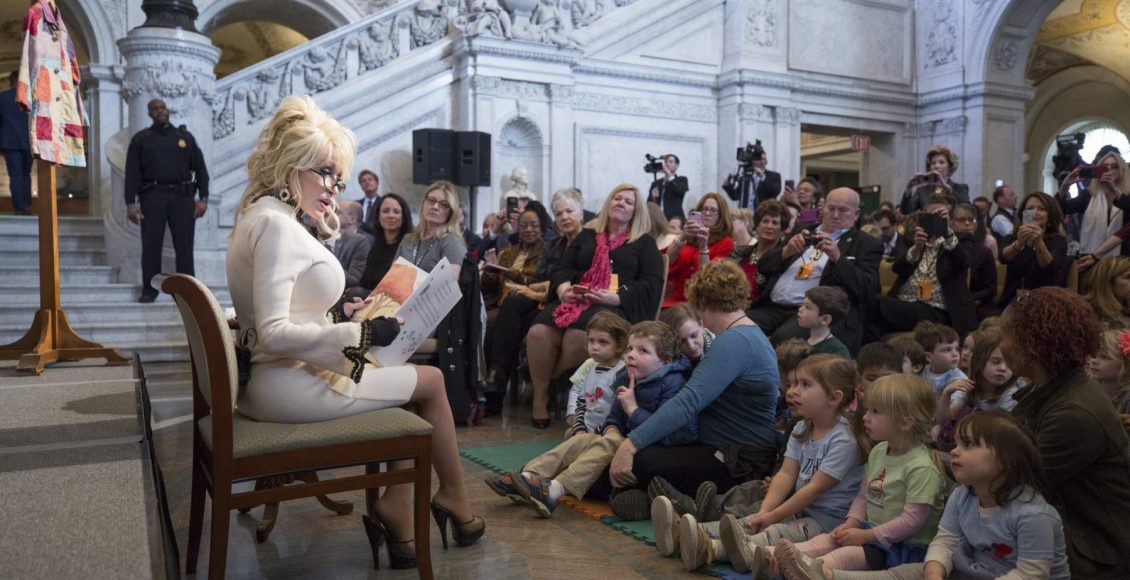 Each month in homes in Knox County, more than 21,000 children receive a book in the mail. The packaging comes off and the children rediscover the joy of reading. And parents relish the moments spent poring over a story with their young ones.

“When you sit down and read with your child or with a child in your life, it’s not just building preliterate skills or their imagination, it’s also critically important bonding,” says Mary Pom Claiborne, director of marketing, development and communications at the Knox County Public Library. “It’s a very intimate time. They get a lot of emotional security, and that can set a tone for the child’s life.”

Claiborne has been with the public library since 2004. Just one year after her entry, the library officially launched the Knox County portion of Dolly Parton’s Imagination Library. Once a month until their fifth birthday, children who are registered for the program, free of charge, receive a book in the mail, addressed to them. Claiborne worked diligently from the start, knowing how important this would be to the library’s mission. “When you create readers, they’re going to want to continue reading,” she says. “It’s a nice complement to what we do.”

More than 3 million books have been mailed out in Knox County since 2005 through the program. But it is just a small fraction of the impact the Imagination Library has had across the world.

The Imagination Library was the brainchild of East Tennessee’s one and only Dolly Parton. Back in 1988, Parton started the Dollywood Foundation to focus on unmet needs of children in Sevier County, where Parton grew up. And while the foundation at the time focused on work that addressed the growing dropout rate in the county, other work was brewing that would ultimately form the program we see today.

“Dolly has the ability to inspire people to do things and make it fun and exciting,” says David Dotson, CEO of the Dollywood Foundation. “That all came together in 1995 when the beginning of the Imagination Library started to come into focus.”

After making an impact on many teen lives with the Buddy Program, Parton and her team worked diligently to find a new arena in which to make a difference, and for Parton, something very close to home came to mind. “This entire effort was inspired by my daddy,” Parton recalls. “I saw firsthand how the inability to read and write hurt him in so many ways. So I wanted to do something to honor him and inspire children to love books and love learning.” And so, with a strong sense of purpose at its core, the program took hold and the Imagination Library mailed its very first book in 1996.

At the time the program focused on Sevier County, but, as Dotson recalls, when he came on board in 1999 it was clear this was a model that could be easily duplicated far and wide. “We knew the model would work on an operational basis, so it was really a matter of how you share this with other communities,” he says. “We weren’t trying to sell it, but when you really believe in something, you’re just trying to share the good news.”

By 2002, 35 communities were participating, and Dotson and a small team were scouring the country for more, attending regional and national meetings, presenting at workshops and conferences, cultivating any opportunity they could. And in 2004, Governor Phil Bredeson launched the Governor’s Books from Birth Foundation, expanding the work of Imagination Library statewide in Tennessee.

“From that point to the last few years, that has driven most of the growth,” Dotson says, adding that other statewide programs have jumped on board and others are planning to in the next year. Though it wasn’t originally planned, the program went international In 2006 when it launched in Canada. Then the mayor from a town in Yorkshire, England, was in Tennessee and chatting with a tourism official when Imagination Library came up in the conversation. It made its way to the United Kingdom the following year. Australia and Ireland also house programs that started in 2013 and 2019 respectively.

Today, 1.7 million children, including children in all 50 states, are enrolled in Dolly Parton’s Imagination Library.

The critical piece of Imagination Library’s success lies within the partnerships built with local nonprofits, businesses, and more. “Our partners are really the magic of it,” Dotson says. “The thing I’m most proud of is that we’ve been able to build partnerships with so many different types of organizations, and it feels like we’ve done something to unify people. It’s hard to argue with what we’re doing.”

The foundation has a staff of 15 that manages the operational side of the program, negotiating the best books at the lowest prices, negotiating mailing costs, book enhancements like title-specific reading tips, program expansion, and more. They then join with community partners or a statewide program which handles registering kids for the program and maintaining their local database. Parton pays the overhead for the foundation staff, and each participating community covers the cost of books and postage.

United Ways, Friends of the Library, civic clubs, Junior Leagues, literacy organizations and more are often the partners, but not always. “Whoever the local organization is is making it happen,” Dotson says. “They are the local face, funder and manager.”

In Tennessee, the state commits 50 percent of the funding for Imagination Library programs in all 95 counties, something Claiborne says was critical to its success. “It would have been difficult to do without the governor’s commitment,” she admits. “Once he paid for half, everybody was super excited to back it.” For the other half, the local organizations work with the community to raise the funds.

Today in Knox County, the program is headed by Danielle Velez, who was a parent of two Imagination Library recipients prior to managing the program for the library. “We signed up for the Imagination Library in the hospital and the books just started arriving. It was such a good reminder when you’re so overwhelmed,” she recalls from when her daughters were born. “I started realizing what a gift it was to get those in the mail.” They were perfect, she says, perfect topics always perfectly timed.

Velez works with many community partners to ensure children are enrolled. Birthing hospitals are key as parents fill out paperwork before they even leave with their newborns. Other libraries, Headstart programs and community events are critical to ensuring children register. Today, Velez says, 60 to 70 percent of registrations come in online, and while it’s tough to say exactly where the registrations are coming from, word of mouth and local program help are critical. And so is Parton. “Anytime Dolly does anything, she promotes the Imagination Library,” Velez says.

While 2020 was a challenging year for so many, the Imagination Library hasn’t seen much change. “As the world has shifted, it’s shifted in our direction,” Dotson says. A home-based program that provides enrichment for kids with their family is what most families needed this past year. “The model is a perfect fit to deal with the pandemic.” In 2020, the program gifted 19 million books, coming in just under the 15 percent increase goal they had set for themselves. Four of the program’s biggest enrollment months ever happened last year.

As of this year, the Dollywood Foundation has given away 150 million books through Imagination Library, a milestone made possible through the efforts of people across the world with a love of reading and a desire to instill that love in generations to come.

“Honestly, I never dreamed this program would be this big,” Parton says, adding that her original goal was to involve a few more counties in east Tennessee. “But as we began to grow, my dream began to grow, too. And we aren’t done yet! But even if all of this stopped today, the Imagination Library would still be the thing I am most proud of. Everywhere I go kids, parents and grandparents all thank me for the books and share really powerful stories about what this means to them. It’s an honor to know that I may play a small role in their lives.”