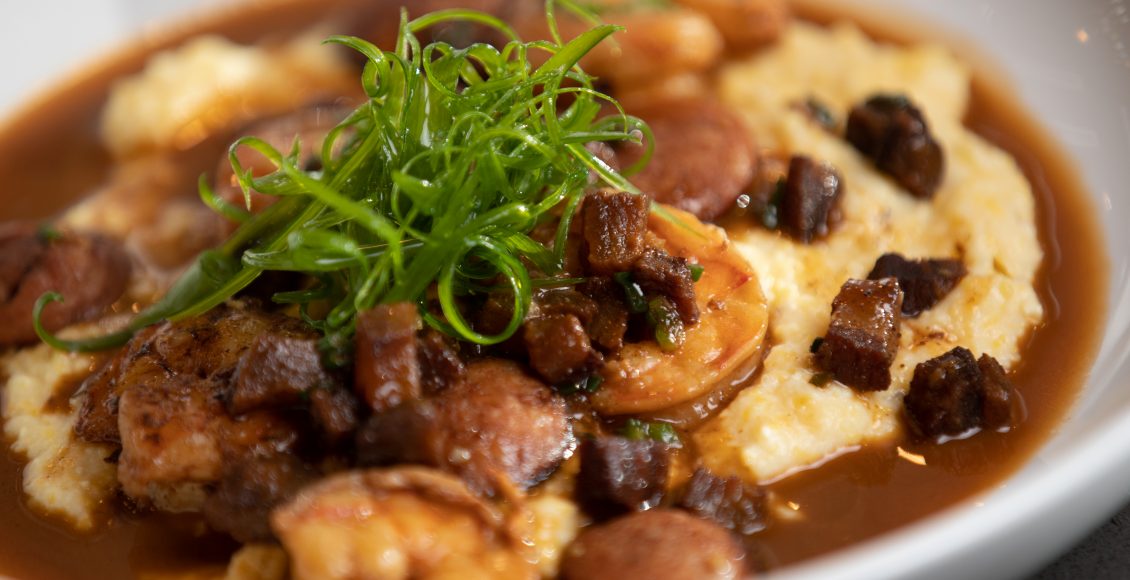 Downtown Knoxville’s latest addition to the hotel scene gets your attention when the glass doors of the new Embassy Suites lobby on Gay Street whisk open to reveal a 50-foot-tall light array, artistic cast-bronze ceiling lights, and modern décor looking like a fashionable boutique hotel in a large city. A space that many remember as a cavernous and boring bank office, as silent as a tomb, now makes each patron feel like a red-carpet celebrity.
Walking up the black polished steps to the new Knox Mason mezzanine, you are forgiven for wondering whether this is the place to get the shrimp and grits, crayfish, and cornmeal fritters that made chef Matt Gallaher’s South Gay Street storefront a foodie magnet.

From that high-design mezzanine, diners can look down over the glittering lobby—or from the covered outside balcony suspended over the sidewalk below, they can watch the passing parade on Gay Street, looking more and more like Bruce McCamish’s artistic photos. Inside, the slate blue and gray ceilings and white walls set a contemporary tone, but you draw hope from a sliding wood barn door in front of the wine closet and the cookware atop the internal walls—light blue, teal, and green Le Creuset Dutch ovens, southern cooking books, mason jars (of course), and a Leave it To Beaver-era desk globe with the Approved by Parents Magazine tag still attached.
Knox Mason servers get it: you are there to savor that true southern cuisine, for example, using warm Benton’s bacon vinaigrette on a ‘Kilt” greens salad of kale and frisée on Paysan Tennessee toast, crowned by a Windy Acres Farm egg poached at 142 degrees.

As Gallaher and chef de cuisine Warren Weiss were shuttering the old location in 2018, they got together and set out their plan to reopen a year later in a new location.

“Matt and I collaborated on the menu,” says Weiss. “It would have Knox Mason original recipes. In some places the menu was honed down; in others we added some embellishments, like the Smoky Springer Mountain Chicken and Cades Cove Sausage Gumbo. But we agreed on having the same tone that we have no matter how polished our environs.” To that end, Weiss made sure to take with him the most valuable things—the original Knox Mason recipes. “One recipe was written on a beverage napkin, others on random pieces of paper, and some stuck on the wall.”

The commitment to an unpretentious tone carries through to the way dishes using locally sourced ingredients are presented with simple elegance.

With the super-fresh Trout Fillet as an outlier at $24, large dishes are a reasonable $18 to $19. Openers range from $5 to $7. This is an excellent value for a memorable culinary treat.