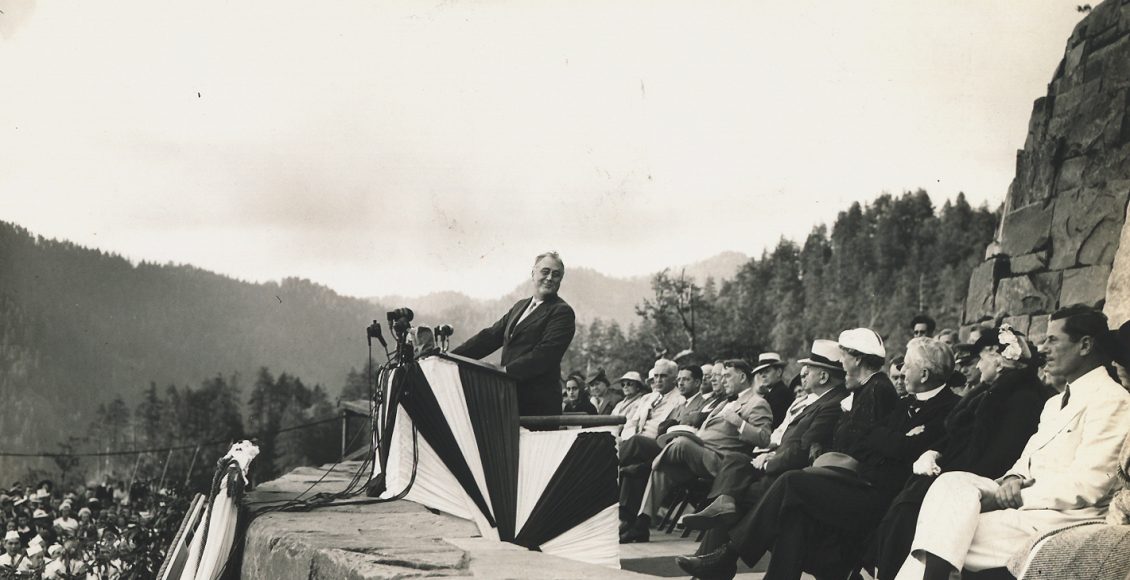 FDR ‘lifted the nation from its knees’

merica teetered on the brink of disaster. The stock market crashed in 1929. Banks began to fail. During the one-term presidency of Herbert Hoover, industrial production in this country fell by 47 percent. The gross domestic product declined by 30 percent. Unemployment reached 23 percent. The country suffered from the throes of the Great Depression. In 1932, Franklin Delano Roosevelt, while hiding the crippling effects of his bout with polio, promised economic recovery through a “New Deal.” He advocated the end of Prohibition. With a campaign that featured the upbeat song “Happy Days Are Here Again,” Roosevelt won in a landslide. President Hoover received less than 40 percent of the popular vote.

On February 15, 1933, three months after his election and less than three weeks before the administration of his oath of office, Roosevelt traveled to Miami to address some 20,000 members of the American Legion. Accompanied by Chicago Mayor Anton Cermak, FDR had spoken only briefly from the back of his open car when five shots were fired in his direction. Although not the target of the assassination attempt, Cermak suffered a mortal wound to the chest. His final words to Roosevelt are engraved on his tombstone, “I’m glad it was me, not you.” Reportedly, Lillian Cross, a bystander, had spoiled the would-be assassin’s aim by striking his arm with her pocketbook.

Giuseppe Zangara, an unemployed bricklayer, had purchased a revolver for $8 at a local pawn shop. When questioned by authorities after his arrest, he explained that he hated “the rich, the powerful, and all presidents.” Charged, tried, and convicted of his crimes, Zangara was executed by electric chair within a year. Had he been successful in his effort to murder the President-Elect, history would have changed course.

Inaugurated March 4, 1933, President Roosevelt, having majorities in the Senate and the House, was able to pass massive legislation designed to cure the nation’s woes. His work created the Federal Deposit Insurance Corporation, the Social Security Service, the Securities and Exchange Commission, and the Civilian Conservation Corps. Hallmarks of his “first 100 days” in office included the implementation of Unemployment Insurance, the Farm Credit Administration, Child Labor Laws, and other social programs. Of importance to this region, on May 18, 1933, FDR signed the Tennessee Valley Authority Act, creating an entity designed to tackle flooding, manage forests, and spur the economy by the production of electricity. Further, on June 15, 1934, the Great Smoky Mountains National Park officially opened. Whereas funding originated with $5 million from North Carolina, Tennessee, and private gifts, which was matched by a grant authorized by John D. Rockefeller, Jr., Roosevelt allocated another $1.5 million in 1935 to

make sure the Smokies met the minimum number of acres to qualify for park development. He visited the Smokies for the first time within a year and then returned on September 2, 1940, to dedicate the park “for the permanent enjoyment of the people.”  To date, FDR has been the only President to have set foot in the most visited national park in America.

In 1936, FDR, who had connected with the American people through his periodic “fireside chats” on public radio, won a resounding re-election victory. Troubles, however, were not at an end. The following year, the economic recovery suffered a setback. Frustrated when a divided, nine-member Supreme Court struck down some of his legislation as unconstitutional, FDR met opposition when he sought Congressional approval to increase the size of the high court with his own nominees. During the legislative debate on this “court packing issue,” Justice Owen Roberts, who had consistently voted against upholding the constitutionality of New Deal legislation, changed course.  In a 5-4 decision approving a minimum wage law, Justice Roberts (no relation to the present Chief Justice) held with the majority – “the switch in time saved the nine”, some said, perhaps preserving the sacred role of an independent judiciary from either executive or legislative branch influence. The crisis over, FDR’s proposal never got out of committee in the Senate. His popularity had declined, but only temporarily.

By the election of 1940, Europe was at war, placing the United States and others on the threshold of world war. Although FDR won decisively, his margin of victory in the popular vote was less. As our country professed neutrality in the European conflict, Roosevelt quietly prepared for the worst. Congress authorized the first peacetime draft in American history. The United States supplied ships, planes, weapons, and ammunition to aid in Great Britain’s defense. Gallup polling confirmed a change in the mood of our country, indicating that the people supported this assistance even at the risk of war. Then, in September of 1941, a German submarine fired on the USS Greer off the coast of Iceland. Meanwhile, diplomatic relations between our country and Japan had become tense. Finally, on Sunday, December 7, Japan, suspicious of our country’s motives in the re-location of the Pacific Fleet from California to Hawaii, attacked Pearl Harbor, “a day which will live in infamy,” the President lamented on the following day. Within minutes after his speech, Congress declared war against Japan.

A few days later, Hitler’s Nazi Germany declared war on the United States. Americans responded. FDR’s leadership, in partnership with Allies Joseph Stalin of Russia and especially that of Winston Churchill, ultimately brought victory in World War II. Sixteen million Americans, later described as our nation’s “Greatest Generation,” served in the military over the four-year fight. In the end, our country emerged as a superpower, no longer isolated from world affairs.

The strain of the war, however, took its toll on the health of the President. On April 12, 1945, five months after his election to an unprecedented fourth term and less than three months after his inauguration, FDR died at age 63 of a cerebral hemorrhage.  His body was transported by train from the “Little White House” in Warm Springs, Georgia, first to Washington, D.C., and then to his final resting place in Hyde Park, New York. Hundreds of thousands of Americans stopped to pay tribute, lining the train tracks along the route north.  As the funeral procession passed along Pennsylvania Avenue in our capitol city, a reporter looking for a story observed a man sobbing uncontrollably. “Sir, sir,” he asked, “did you know the president?” “No,” he answered while struggling to regain his composure, “but he knew me….”

While some might say that the personal life of FDR did not always merit admiration, his service to his country as a public figure earned universal praise. In this critical era of American history, second in importance only to the Civil War, a eulogist described the nature of his influence: “He lifted himself from his wheelchair, to lift the nation from its knees.”