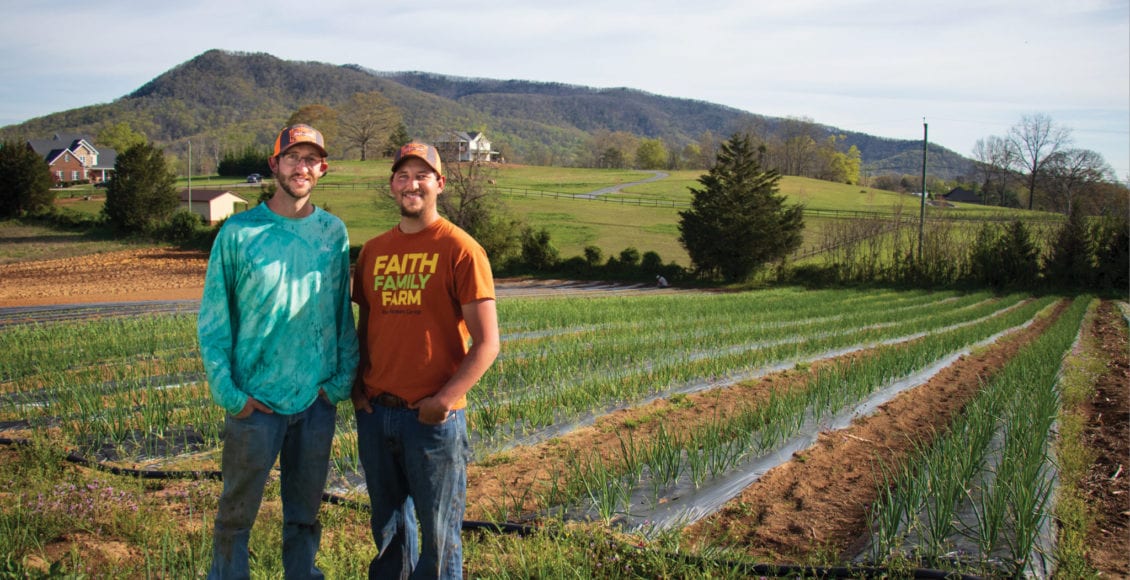 On a hot summer afternoon, I don’t want to contemplate cooking dinner over a hot stove. Instead, a fresh-picked salad or a sandwich made with hunks of big, earthy tomato sounds inviting.

So I head to the farmers’ market down the road to gaze at the red, purple, and yellow fruit and ask for advice: Which tomato variety will make my dream-sandwich drip juice down my elbow? Local farmers often grow heirloom varieties that taste amazing, but don’t ship long distances for stocking grocery store shelves.

The farmers’ market is full of color, smells, and textures that makes buying food joyful in a way my grocery trips under fluorescent lights will never be. Today, you can shop East Tennessee farmers’ markets most any day of the week from April until November; plus, Knoxville also hosts an indoor winter market. The non-profit Nourish Knoxville operates the Market Square markets and the market at New Harvest Park, and the East Tennessee Farmers Association for Retail Marketing (FARM) runs markets at Ebenezer United Methodist Church in historic Oak Ridge, and, new this year, at Hardin Valley Church of Christ. East Knoxville is also now home to a small Sunday market.

I find these a great opportunity to teach my kids where food comes from. If they sample a fruit or vegetable and complete an activity related to the environment or the food system, kids can earn $5 vouchers to do their own food shopping through POP (“Power of Produce”) Club at the Market Square and New Harvest markets.

The market scene has diversified and improved significantly in recent years. “It’s really exciting to seeing students coming downtown and not just buying coffee and a cute flower, but buying kale to make salad for themselves and their roommates,” says Ellie Moore, markets manager for Nourish Knoxville.

“People have said to my parents, ‘You don’t look like a farmer,’” says Shannon Meadows. “What do they think a farmer looks like?” News flash: He doesn’t have to wear overalls. Or be a he.

At Mountain Meadows, a farmer looks like Shannon: A tanned, spindly young woman in a T-shirt and shorts, with a huge triangular smile, and a ponytail of escaping blonde curls. Fridays she’s often up at dawn and done picking and packing after midnight to get ready for two markets the next day.

Mountain Meadows Farm began as a “retirement project” for Shannon’s parents, Ernie and Sue Meadows. Ernie was a landscape architect for the Tennessee Valley Authority, but he missed the farm life of his childhood in South Georgia. He and Sue bought a farm on a ridge in Anderson County in 1970, raising hogs there for several decades as a second income.

Now Mountain Meadows grows berries, plums, nectarines, peaches, apples, pears, grapes, melons, and some vegetables, with Shannon and David Meadows at the helm. The fruit varieties often change almost weekly, which is why a family member can usually be found behind the counter. “If you kind of know the pulse of what’s happening on the farm, it’s easier to describe to the customer what they may like and what’s best at that moment,” Shannon says.

You can find her at the Ebenezer market and at Market Square on Wednesdays, explaining how to tell if a peach is juicy-ripe without bruising its “shoulders.”

Farming is often generational, and tough for newbies to break into–especially in today’s age of corporate farms on thousands of acres. But the local food movement has made it more feasible to start from scratch with a small farm. That’s just what Brian Ader did on five acres of family land, down the road from his parents in Corryton. He named the farm for a small, delicate moth that benefits the garden by eating pesky aphids.

“I was always interested in environmental issues and food, so that led me to volunteering and working on other farms,” Ader says. He earned a degree in plant and soil science before venturing into farming. “I’ve been doing it a few years and still feel like a beginner.” Although the learning curve has been huge, Ader has a dedicated customer base.

He grows “most any vegetables,” including greens, asparagus, root crops, squashes, tomatoes, peppers, and broccoli. The farm’s cherry tomatoes are among his most popular produce, but he also encourages customers to try new things like kohlrabi and bok choy, “those Asian greens people are shy about.”

Lacewing is not certified organic, but Ader says he uses only “organic approved inputs”–in other words, chicken manure for fertilizer, biodegradable film mulch made of corn, and sparse pesticides that are organic-certified. Ader also sells eggs from his pasture-raised flock.

When it comes to produce, the Zavels family grows “a row or two of everything,” says Charlie Zavels, 23. He and his brother Zack, 26, are the third generation working on their parents’ cattle farm in Corryton. The Zavels have about ten acres in produce in addition to the cattle they still raise, along with hogs (both without antibiotics or steroids) and pasture-raised lambs. It’s all for sale at the market, with the pork and aged beef available by the cut.

“We started out doing one or two markets a week, and now we’re up to seven,” Charlie says. “I’ve been going to market by myself since I was 16. Customers have kinda watched me grow up.”

In the intervening years, he earned a degree in plant science and got hitched. “[My brother and I] always wanted to farm, but we had to go get a degree in case farming didn’t work out,” he says.

The women of the family are often the ones answering your questions and weighing your produce with a smile. Customers keep coming back to the Zavels’ booth for cherry tomatoes, sweet peppers, and winter squash.

Many people assume food sold at farmers’ markets has been grown without chemicals or genetically manufactured seed. But while many local farmers try to use sustainable farming methods, most aren’t actually organic. Hines Valley Farm is an exception: It’s certified organic by the USDA. John Ledbetter grows more than 20 different vegetables on his two acres, selling them not only at the Market Square farmers’ market but also to local restaurants like Northshore Brasserie and The Plaid Apron.

Although Ledbetter’s father had grown corn, soybeans, and alfalfa in Texas, Ledbetter at first had no interest in following that path. Farming is his fourth career after managing restaurants, teaching college, and advising mutual fund clients on tax rules.

When Ledbetter felt called to life outside a cubicle, he turned back to farming, but in a way that would express his environmentalism. About eight years ago, he bought a disused farm in Loudon County that is surrounded by creeks and ponds on three sides, insulating it from chemicals that might drift over from other farms. He does a lot of the work himself, spending 90 hours a week in the field during the growing season.

Visible directly across the water from The Cove park in Farragut, RiverView Family Farm has been in business since 1801. Siblings Byron Williams and Rachel Williams Samulski have taken over many of the daily operations from their parents, Lafayette and Janice. “I’m sixth generation and my children will be the seventh generation,” Samulski says.

The Williams process and sell whole and half Angus beef. “Our cattle are born and raised on the farm, so we can tell you who the great-great grandmother was,” Samulski says. “People used to buy a freezer full of meat because it was cheaper. Now we find that people are buying because they want to know where their meat’s coming from.”

Byron Williams, who is also a full-time golf instructor, decided to help with the farm so his aging father could maintain his lifelong passion.

But over time Byron has made his own mark on the business. He sells grain-fed beef but introduced grass-fed, too, after the owner of a local gym expressed interest in it. Grass-fed cows require more pasture and take about six months longer to fatten up, Byron Williams says.

Samulski runs an event business at the barn that includes hosting weddings and corporate parties as well as a public holiday craft sale.

“We can educate people when they visit the farm,” she said. “So much has grown up around here that I think people are appreciating getting out and away from things.”

If you want to try out using all your senses to grocery shop in a farmer’s market, you will be part of a growing trend. You’ll probably see some friends and neighbors there.

“I think there’s a huge resurgence of folks wanting to cook for themselves and wanting to support local growers and producers,” says Ellie Moore with Nourish Knoxville. In the last six years, “I have just seen the quality of produce and what customers are buying increase so much. It’s just crazy how people are diversifying their grocery basket.”

An award-winning reporter with extensive experience covering the environment, business and government, including the use of open records laws to obtain and analyze documents; an adjunct journalism professor; and a fun storyteller with an interest in folk tales about strong women and historical stories about women, African Americans, laborers, and all those other folks who rarely made the textbooks.