The hilltop house of Michael and Stephanie Trost in Maryville is in transition. They are slowly cleaning out, packing, and preparing to sell the Maryville property in order to realize a dream to become full-time farmers in Madisonville. “We’re used to working hard,” says Michael. It’s an especially bright future for two people who recently weren’t sure what that future might look like. 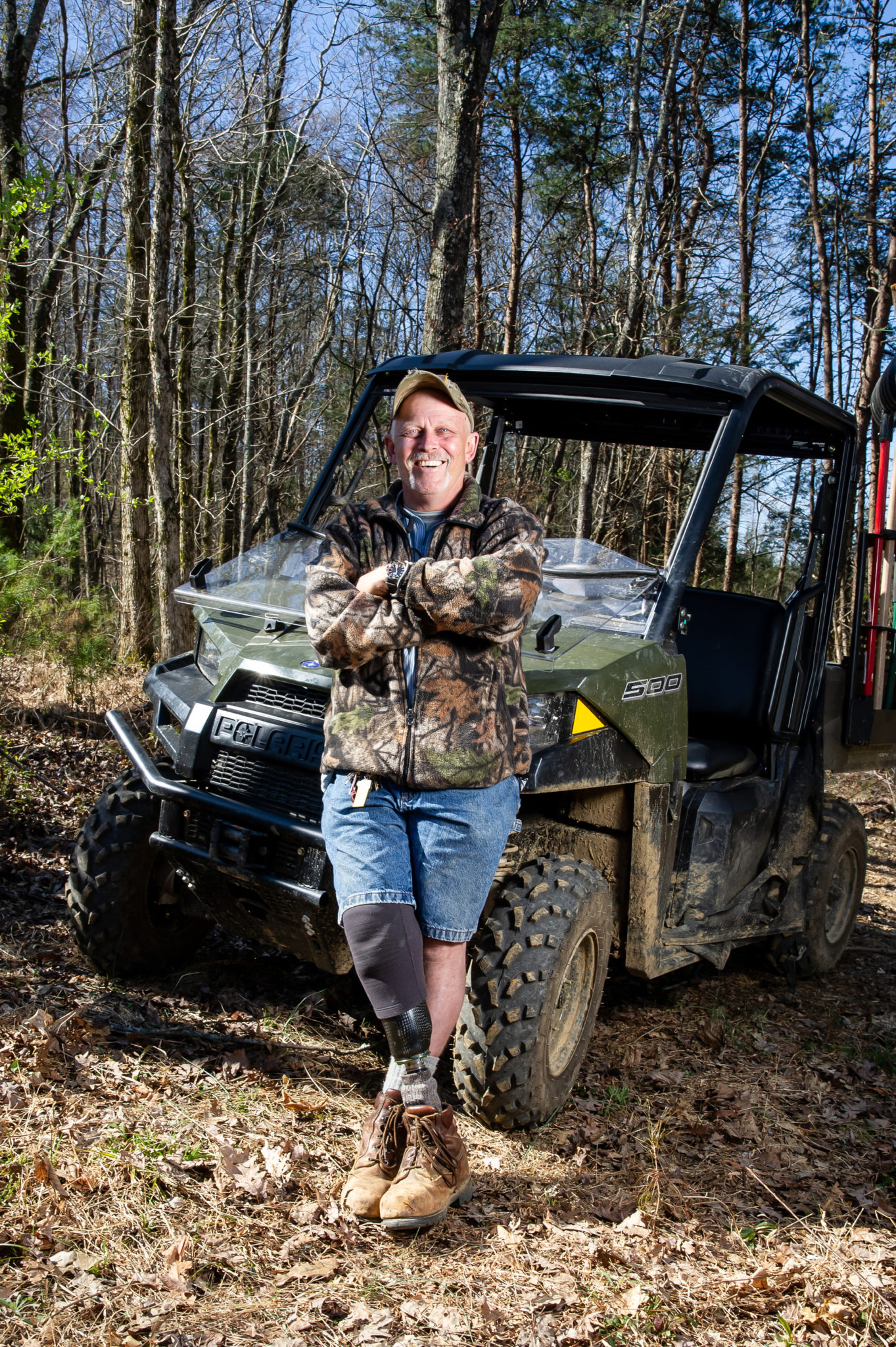 Michael was born in Harbor City, California in 1963. His father had been a U.S. Marine, so it came as no surprise when in 1982, just out of high school, Michael began a long and restless career in the U.S. Army, the U.S. National Guard, and the U.S. Army Reserve. When he enlisted, he was posted in Seoul and then in San Francisco as a clerk. After a few years, he left the Army and joined the National Guard, serving in a tank unit in California. In 1988, he attended the California Military Academy for officer training and then joined the infantry “and was everything from a platoon leader to an executive officer to a company commander,” Michael says. He resigned his commission in 1996 after earning a bachelor’s degree in History and was interested in possibly teaching, “but my grandfather said ‘Do one thing and do it well’. For me, that was the military.” So, he returned to the Army as an enlisted infantryman and served again in South Korea, though this time in the demilitarized zone at the border with North Korea. “I liked it, even though it was a little bit scary.”

He stuck with that until 2000, “and at this point I’d spent a lot of time in the military but hadn’t been anywhere except Korea.” He noticed that an Army Reserve unit called Civil Affairs “had guys who went everywhere, they were going everywhere, all over the planet, basically… Let’s try doing that.” Michael says the civil affairs teams included Special Forces and Psychological Operations operatives and they were sent “wherever troops needed to win the hearts and minds” of civilians. He traveled with teams in India, Bangladesh, and Thailand, augmenting Special Forces in the Pacific Rim. “And then 9/11 happened and we were all geared up, ready to go. We knew they were going to call us up. We were short in supply and high in demand.”

Michael deployed to Mosul, Iraq, in 2004, to work in the operations center as a driver and gunner and he helped train others how to use the larger weapons. In 2006, he became a teacher in a more formal setting when he was stationed at Fort Bragg, North Carolina as an instructor in weapons and civil affairs. He taught recruits how to work in the midst of different cultures; how to ascertain problems and find ways to communicate; “how to understand how others just do life, basically,” he says.

Stephanie and Michael met via a dating website in 2007 while she was working in South Carolina and he was still at Fort Bragg. She says it took a lot of time and thought for them to get together and they didn’t waste that time. They got married in 2008 and moved to their Maryville hilltop in 2009. “I had set a distance limit of 50 miles on my profile and he was well outside of that,” she laughs, “but we were a 98 percent match.” “It was a real good match,” Michael adds. They built a red barn and filled it with horses, mules, and alpacas. They were enjoying their life together. They made plans for the future. In July 2011, Michael was deployed to Afghanistan.

Spin Boldak (White Desert) lies on the border with Pakistan at Afghanistan’s southeastern edge. The hilly desert district is linked with Kandahar by highway A75 and is the last outpost at the border in that area of Kandahar Province. It has seen centuries of warfare. Michael and his fellow soldiers were there to convince local civilians to work with them, rather than with the Taliban. “No electricity, no running water… But they had cell phones. And we set up all these solar panels to give them lights on the road (Highway A75), their one highway that was paved. Trucks would come every day from Pakistan, delivering whatever and also trying to smuggle in ammonium nitrate and other stuff to build bombs,” Michael remembers.

When Michael, then a Sergeant, arrived in 2011, Afghan national police and security forces were training for the transition to a planned American withdrawal in 2014. In February 2012, a statement by Afghan Taliban head and former Afghanistan President Mullah Omar claimed the Taliban had successfully infiltrated the Afghan security forces and police and were combating foreign troops as insiders. These insider attacks are called “green-on-blue incidents.” Just days after Omar’s statement, Michael was leading a Civil Affairs team of American troops, Afghanistan National Police, and Albanian NATO soldiers in a mission to document data on village schools. Getting out of their vehicles in one village, they were attacked.

At first, Michael thought someone had thrown a grenade at them. He’d been in the act of raising his right hand to his face when something cut his hand in two. “I checked my face, because I would have been hit there, too, but then we heard ‘d-d-d, d-d-d-d… a machine gun firing.” With mud walls on either side of the road, Michael couldn’t tell where the firing was coming from and he took bullets in his abdomen and both buttocks and legs. The Albanian captain and corporal who were with him were also shot; the captain was killed. Michael and the corporal managed to wait out the bullets under one of their vehicles before the rest of their team found them and gave them as much medical help as they could. (Michael lost a finger when his hand was hit; it was retrieved, but couldn’t be reattached when he finally got into surgery.) Then, they were helicoptered out to Kandahar. The shooters were members of the Afghan National Police. One was killed during the firefight; the other was captured afterward.

Michael was prepped for surgery as soon as he hit the ground in Kandahar. After the first round of surgeries, he managed to contact Stephanie. “At first he couldn’t speak,” she says, “because he was so heavily medicated. But then I heard his corporal in the background say, ‘She answered the phone’ and I heard a heart monitor. That sound is etched in my memory, forever.” When she was finally able to speak to a doctor, Stephanie was told Michael was being stabilized to be transferred to Landstuhl Regional Medical Center in Germany, where all the major decisions about his treatment would be made. His sciatic nerve had been severed and the wound to his right hand was so bad it could lead to having his arm amputated.

At Landstuhl, Michael’s arm was saved and several surgeries later, he was transferred again to Walter Reed National Military Medical Center in Maryland. Stephanie met him there. He spent the next few years having surgeries, fighting bacterial infections, rehabilitating, and combating the ensuing pain with a variety of medications. “I was on Methadone for a while, on Oxycodone for years,” Michael says, “just trying to mask the pain with whatever I could pump down me.”

Stephanie says she never really understood how much pain he had been in until 2016: Michael’s right leg had refused to heal from the original injury and was finally amputated. The surgeons used the big toe from that foot to build a thumb for Michael’s wounded right hand. “He just had his leg amputated and his hand rebuilt, they gave him a morphine pump; he never used it and that to me was truly an eye-opener to the level of pain he’d been at. They took his leg and that pain didn’t compare to what it had been. I noticed the change in him that day, from that day on.” She says the first week he was home after the amputation, he began weaning himself from all the opioids he’d been on. He received a prosthetic, did more rehabilitation, and then decided to put his new leg to the test: in 2017, he hiked up Half Dome in California’s Yosemite National Park.

Michael and Stephanie are both retired now, though by no means leading lives of leisure. Soon, she and her Gentleman Hop Farmer (according to his LinkedIn profile) will be moving to the 25-acre Madisonville farmstead: Poke-a-Dot Hops and Garden. Michael received his brewing certificate a few years ago and now grows a variety of hops that he hopes to sell to local brewers. Stephanie is already growing shiitake mushrooms and they’ll soon plant organic vegetables and herbs to sell, along with honey and the bath products that Stephanie makes. Visitors to the farm will be able to buy the produce and commune with the horses, mules, and alpacas. The log cabin that they built is a rental for most of the year; in the off-season, it’s a free getaway for veterans and their families. Michael and Stephanie are trading lives of relative solitude on the hilltop for a life that will be at least partially open to the public.

This is their path into the future and we’re invited along for the walk.