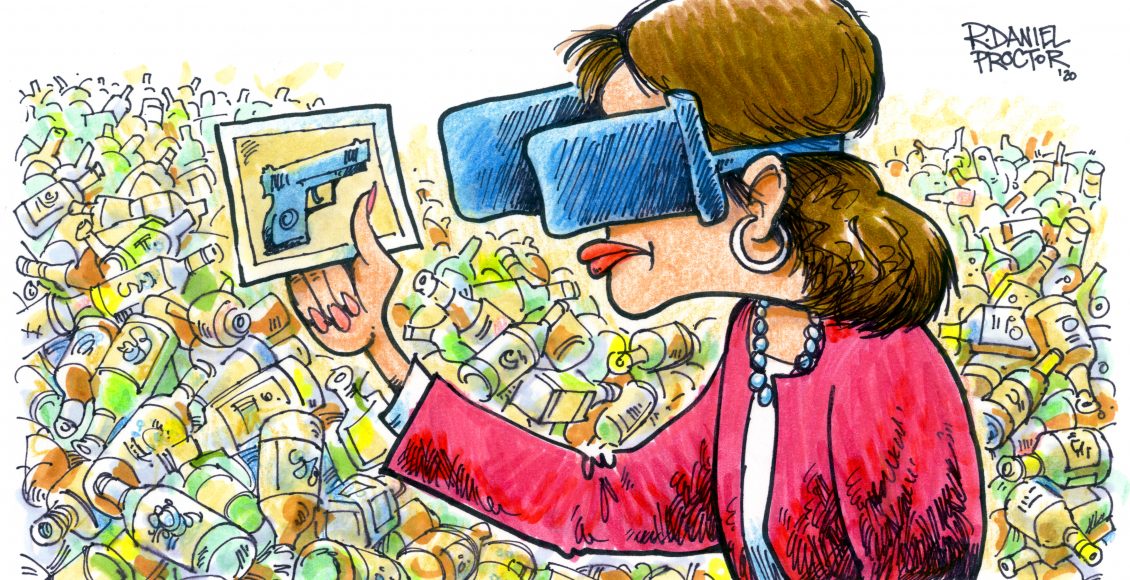 Safety is city government’s fundamental responsibility. That was Knoxville Mayor Indya Kincannon’s battle cry as she sighted Gov. Bill Lee’s permit-less handgun carry legislation in her rhetorical crosshairs and took a shot against its passage.

Was it passion or politics? Why stop at guns if safety is the priority?

Lee’s legislation, introduced in February, “would extend the constitutional right to carry a handgun to all law-abiding citizens with or without a permit who are 21 and older, except in current restricted areas,” a governor’s office news release said. The bill as introduced also increased penalties for several firearms-related offenses.

“The Second Amendment is clear and concise and secures the freedoms of law-abiding citizens to keep and bear arms,” said Lee in the news release.

Kincannon took aim and fired off this statement: “Public Safety is the fundamental role of city government, so when legislation is proposed that threatens public safety, it is my job to speak out.

“Pending legislation would allow Tennesseans to carry a loaded handgun in public without a permit, which makes Knoxville residents and all Tennesseans less safe.

“I have experienced gun violence first hand, as have too many Knoxville residents. I support the right for law-abiding Tennesseans to own guns, but I also support common sense measures like requiring permits to publicly carry handguns, training and guidance for safe storage to keep our children protected. Knoxville Police Chief Eve Thomas shares these concerns.

“The proposed legislation is a step in the wrong direction. I urge our representatives in the General Assembly to vote no on permitless gun carry.”

In the politically-charged atmosphere surrounding guns, the City Council in 2019 voted to not allow gun shows on city-owned property. Former Mayor Madeline Rogero said she would allow no additional shows to be scheduled. As a mayoral candidate, Kincannon supported Rogero’s position.

Why stop at guns? Why should the city profit, and seek to increase those profits, from alcohol and its accompanying dangers? Consider the mayor’s statement in another possible light:

“I have experienced alcohol-related dangers, as have too many Knoxville residents. I support the right for law-abiding Tennesseans to drink alcohol, but I also support common sense measures like the city not expanding areas in which alcohol is served at city events or venues, and safe storage of alcohol to keep our children protected.”

Guns in the U.S., a country of 330 million people, are involved annually in about 11,000 homicides and some 22,000 suicides (of nearly 50,000 successful attempts). Alcohol, according to the National Institute of Health, is the U.S.’s third leading preventable death cause, with an estimated 88,000 deaths yearly.

From 2009 – 2019, nearly 5,000 alcohol-related car crashes occurred in Knox County, according to the state Department of Safety and Homeland Security.

Any sentient being knows of alcohol’s potentially destructive effects, first-hand or otherwise, on health, families, workplaces, and communities. Yet, it’s sold in city-owned facilities, and city leaders have continued to expand the number of venues in which people can belly up to the bar.

The city’s resolution attempting to shoot down Lee’s bill passed about a month after the City Council approved a Downtown Festival District, within which alcohol can be served. Alcohol is sold at city-owned Chilhowee Park, Civic Auditorium and Coliseum, and the Knoxville Convention Center. For the first five months of the fiscal year, alcohol sales at Chilhowee and the auditorium came in just short of $1.3 million; adding in the convention center (sales numbers weren’t provided) would obviously shoot that figure higher.

In February 2019, City Council indicated support for Zoo Knoxville’s desire to sell alcohol in restaurants, cafes, and food stands, but not throughout the zoo; however, once it’s down the hatch, alcohol travels with a person, permit or no permit.

There’s one reason the city sells or supports alcohol sales: Money. Why are guns getting more of the city’s attention? Politics.

If taking a public stand for public safety is necessary, guns aren’t the only target at which to shoot.