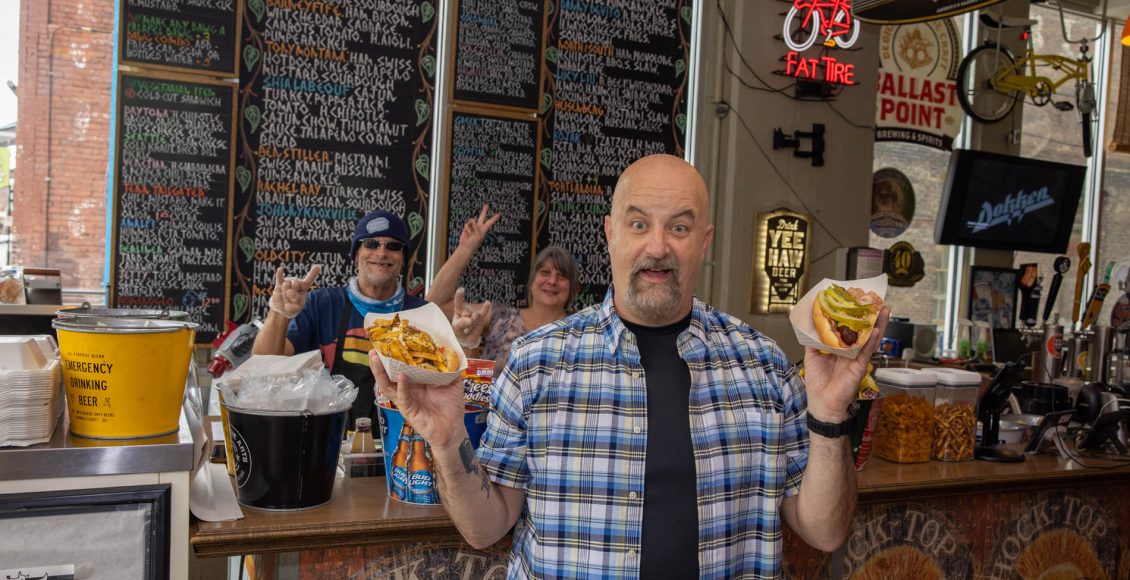 Knoxville’s historic Old City has become a walkable foodie tour, where cultures and cuisines collide to bring a variety of tastes sure to please all palates. I’ve walked through Old City many times, but never have I committed to sampling the breadth of the cuisine for myself; until now that is. From tamales and empanadas to pizza and hot dogs, I’ve asked servers to recommend their favorite dishes at some Old City favorites, and I can tell you first hand, downtown revitalization has all of Knoxville licking its lips.

I have to admit that every tamale I had ever eaten up until I stepped into Good Golly Tamale had come out of a truck or an Old El Paso can. I’ve been too content with burritos, tacos, and chimichangas to branch out to tamales at Latin American restaurants. But there’s a place on Central Street where you don’t really have much choice. And trust me, you won’t want one either. Juniper, my server, selected the Chicken Tinga from the chalkboard, telling me this was the owner’s daily eat. Well, I thought, if he likes it, then it will be good enough for me. But “good enough” doesn’t even scratch the surface. I’ve heard others mention texture when explaining why they won’t eat something. For me, texture is a non-issue. Yet, the pure density and bite of the husk-wrapped corn tamale made me understand how important texture can be to a meal. It was rich and satisfying, sweet and spicy, laden with black beans, pickled cabbage, and rice, and was a complete mouthful with every bite. And even though it was smothered with all those ingredients, the tamale itself stood out like a champ. Thanks, Juniper!

Is there a taste associated with ambiance? When something is classic, like the rustic Barley’s Taproom, you’re right to believe there is. Barley’s pizza had a taste that transported me elsewhere. I’m not exactly sure where, but it was definitely a place where pizza is not delivered in a box in 30 minutes or less. I let Kaya, my server, choose what I would eat, and she did Barley’s proud: one half classic American, one half Caribbean jerk. I wondered if she was hinting at something! The red sauce of the American half was pure tomato bliss. Fresh ingredients make a pizza sing and the spicy meats and melted cheese atop the crispy baked crust were symphonic. I ate it in record time. To hear a chef refer to a bite of food as aromatic always confused me, but now I understand. The spinach, artichoke hearts, and onions on the Caribbean jerk slice joined together with the chicken creating quite an experience. I could hear the steel drums with every bite. Nice work, Kaya!

Hot dogs have always been my thing. I can eat them plain, cut up into mac and cheese, with mayonnaise (yes), smothered in chili, Chicago style; it doesn’t matter. And we won’t get into whether the hot dog is a sandwich or a taco. Because it’s a taco. Moving on. The menu board at Curious Dog is monolithic; there’s not a sandwich or hot dog in existence that’s not on it. Behind the counter, Angie couldn’t settle on just one, so Todd made me three favorites. The Cuban dog was straight from Havana, grilled ham and Swiss with a pickle, white sauce, and jalapeño mustard. The Greek Dog had me wishing I was from Mykonos, with its tzatziki, feta, black olive pesto, chopped fries, tomatoes, onions, cukes, white sauce, and herb olive oil. And the grilled turkey, Swiss, bacon, and coleslaw on the Johnny Knoxville was saucier than he is, with not just barbecue, but white and jalapeño sauces, too. I wondered if I would have to hurtle down Jackson Avenue in a shopping cart after I ate it. (I didn’t.) The sandwich’s jalapeño cornbread had me CLAPPing my hands. Look it up! Thanks for the hospitality, Angie and Todd.

Let’s rename Southern Grit right now to Southern Comfort. In a homey, open space on Central Street, server and manager, Jacob, nestled me right in and told me it was time to eat. And boy, did I eat. Within minutes, I was comforted with a steaming and saucy Bag O’ Shrimp with garlic butter sauce, along with pimento-cheese-smothered and honey-drizzled Fried Green Tomatoes. I may never visit Dollywood’s Front Porch again. Fried chicken has fallen down the list of things on a menu I’ll order. I told Jacob that, and he said, “May I comfort you further with the best fried chicken you’ve ever had?” He wasn’t wrong. Not too breaded, not too dry, this southern-style thigh and hot-spiced leg made up a zesty and satisfying entree. Hush puppies with cinnamon honey butter made me weep with joy later as I ate them. Oh, and a word of advice: if you don’t try the Brussels slaw, may you never have comfort in your life again. Jacob, thank you for holding me close.

Is there a name more synonymous with barbecue than Sweet P’s in Knoxville? It’s probably the most famous dive in East Tennessee. Oh, that’s not an insult. More than the quintessential hole in the wall, this is an order at the counter, grab a plastic fork and knife, seat yourselves kind of dive. And I dove right in. While there are no traditional servers coming to your table, I didn’t need any suggestions on what to order at Sweet P’s. It was only going to be the Brisket Burrito, and I wasn’t going to chance not getting it. I couldn’t tell you one thing about how to smoke brisket, what a smoke ring in the meat means, or how the char makes or breaks the brisket. I can just tell you what tastes good. I love a place that doesn’t skimp on the ingredients and this burrito was loaded with slabs of brisket, pintos, slaw, cheddar, and sauce, just like when it almost kicked the pork butt of Adam Richman on Man v. Food.

Brunch. Thank you, food gods for finding a way to combine breakfast and lunch in such an appetizing way. OliBea, just a smidge outside the Old City across Summit Hill on Central Street, has the perfect brunch combination of sweet and savory. Owner and Chef Jeffrey DeAlejandro crammed my table full of snacks and entrees. I pre-gamed with a Hen-Hoc Butcher Shop pastrami sandwich with chow-chow and chihuahua cheese which rivaled any New York delicatessen. I followed that with lemon pancakes—that made my mouth water for all the right reasons—and a barbecue chicken empanada with habañero pineapple salsa and a poached egg on top that was perfectly crispy and “brunchy”. OliBea is named for two of Chef Jeff’s children and by the end of this meal, I wanted him to adopt me.