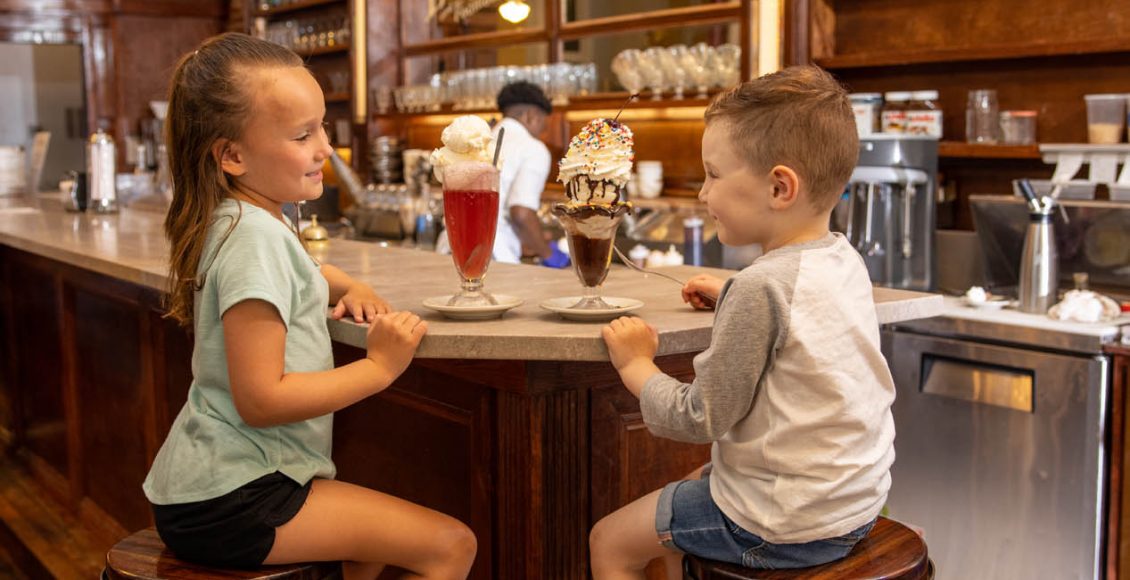 Sights, sounds, and smells bring back memories of the early days in the Marble City

I spent my childhood and early teen years growing up in North Knoxville. Life was simple, and pleasures came easy in those long ago days.

My grandmother and grandfather moved nearby, and I had other relatives just blocks away. The church, grocery store, and the elementary school formed the center of my neighborhood world all along Chickamauga Avenue. Lincoln Park, Arlington, Whittle Springs, and Fountain City made up my stomping grounds, and I formed many grand memories there.

As a boy, I spent many days and nights with my Aunt Bennie and Uncle Roscoe a block from my home. They had no children and made great babysitters. Aunt Bennie had a heavy black rotary dial telephone that made a loud clicking sound as you dialed. And to my excitement, she had a party line. I would often quietly lift the receiver from its cradle and listen to other people’s conversations. Other days I entertained myself with her only encyclopedia volume. It was all about animals and full of colored drawings of fish, birds, mammals, insects, and, my favorite, reptiles.

Uncle Roscoe kept the coal stove in the living room going strong in the fall and winter and stoked it each morning at about 5:00 a.m., rattling around with a poker. He got up early because he worked for the Southern Railway and walked to Coster Shops every day. (If you aren’t familiar with its location, you drive over it going north on I-275 between Oldham Avenue and Heiskell Avenue.) I can remember when the circus train came to town it would unload the elephants and other animals at Coster Shops and proceed in a circus parade down North Central Avenue.

Uncle Roscoe liked to drink whiskey, but Aunt Bennie would not permit it in her house. They told me that Uncle Roscoe would bury half-pint bottles of whiskey in his small front yard and crawl around on his knees from whiskey bottle to whiskey bottle cutting the yard with scissors. Late in life, Uncle Roscoe became an artist, painting large, colorful but amateurish American folk art of trains, mountains, church houses, and out-of-scale people picking berries or playing games on the farm. I’d love to have one of those paintings today.

Downtown Lincoln Park was across Chickamauga Avenue from the elementary school and consisted of a White Store, Cluff’s Barbershop, and Bailes and Workman Drugstore. There was always a group of teenage boys gathered outside the drugstore, calling themselves the “drugstore cowboys.” It was pretty much the same gang that played basketball every day in the Lincoln Park schoolyard. Jerry and Johnny McCoy, as well as my cousin, Jack Pryor, were among the regulars circa 1952. All of these boys attended the new Fulton High School.

When I attended Lincoln Park School, it was always a big day when we heard the “yo-yo boys” were across the street at the drugstore. As soon as the school bell rang, we would race across the street to see the boys from Duncan Yo-Yo Company. They were there to promote the purchase of yo-yo’s, and no matter how many I owned, I would go in and buy another just to get them to carve my initials or a palm tree on its side. They would put on demonstrations and teach us tricks like “around the world,” “walk the dog,” and “rock the baby.” That was big excitement on Chickamauga Avenue.

I never had a paper route, but my older brother, Jim, did. I was made to serve as his assistant. The worst part of working a paper route was delivering the Sunday morning News Sentinel. I can remember getting up at 5:00 a.m. in the cold, foggy darkness of winter Sunday mornings, sitting and rolling newspapers into logs, and delivering them along Hiawassee and Watauga avenues. Our transportation was my brother’s J.C. Higgins bicycle. He pedaled and steered, as I sat on the frame side-saddle between Jimmy and the handlebars, grunting for him as he pedaled the two of us uphill. We had a bootlegger on the route, and Jimmy made me collect from him. I would walk up to his porch like I was drunk hoping he would relate to me and maybe pay his newspaper bill.

Inside my childhood home, I can remember the hardwood floor in the small dining room. It had a black stain in the shape of a cat—body, head, legs, feet, and a long tail—where a cat died and decomposed leaving a permanent blemish. My mother always said that the cat got in the house and died during construction, but I insisted to visitors that a witch had lived in the house before us, and the cat accidentally drank a poisonous potion. To my mother’s horror, I would pull back the rug and show the cat to everyone who came to visit. I personally handled all dining room tours at our house.

Our two bedroom, one bath home had an elevated screened-in front porch. The front steps were high and large and descended down to the sidewalk leading to the street. I played a lot on that porch in the spring and summers. That’s where I kept my collection of Superman comic books and the collectible items I retrieved from cereal boxes.

One day, I felt I should inform my mother that I had polio. (In the early 1950’s, there was a polio epidemic and all parents were frightened for the health of their children.) My mother rushed me to our doctor’s office to confirm that my leg weakness was polio as I had diagnosed. It turned out the doctor said my legs were just “stove up” from jumping off the front steps of our house.

As I got older, I began to ride that J.C. Higgins bike exploring my surroundings throughout North Knoxville. I actually had a bike of my own by then, but I refused to ride it. It was a Donald Duck bicycle, and it embarrassed me. It was blue and yellow, and Donald’s head was mounted in the center of the handlebars, his eyes serving as headlights. I preferred my brother’s old J. C. Higgins, especially after I removed the front fender to make it look faster. I would have removed the rear fender, but needed its support bar to attach clothespins holding a piece of cardboard to rub the spokes, making it sound like a motorcycle. I always carried extra cardboard and clothespins in case my “motor” fell off.

In the summer, I rode through Arlington to Broadway and out Walker Boulevard to Whittle Springs swimming pool where I would spend the day swimming and listening to the jukebox at the concession stand. “Sh’Boom” blasted from the Rock-Ola, and the hotdogs had thin chili. Later, the big attraction turned out to be the girls on towels around the swimming pool.

The #2 Lincoln Park KTL bus picked up and dropped off in front of Aunt Bennie’s house, so going to downtown Knoxville was easy, even for a 10-year-old boy. I took the bus one day to Gay Street to see the big time western Shane, starring Alan Ladd, at the Tennessee Theatre. To prepare for the occasion, I bought three Krystal hamburgers across the street and smuggled them into the theater. There was a good crowd for a mid-week show, but the movie started with no introduction which did not make a lot of sense to me. Years later, I discovered that I had entered during the intermission and only saw the second half. To this day, I have never seen that first half.

In my early teens, I thought I would look good as a blonde. Alone at home, I put Marchand’s Golden Hair Wash on my head and admired how great it looked with my Whittle Springs tan. My parents apparently missed the greatness of my new look and told me that I looked like those yellow baby chicks that Mayo’s on Market Square displayed every Easter. By nightfall, I was close to normal on my hair color. Another lesson learned.

So many things trigger Knoxville memories for me today. The fragrance of the Tennessee Valley Fair overtakes me sometimes when I smell outdoor deep fried cooking. Remember those church booth pinto beans and cornbread? Although I haven’t been to the fair in years, those memories come flooding back every year when I see it advertised. I can’t see a Friday night high school football game without remembering those Fulton football games against East or Rule at the Evans-Collins Field. How about a fountain coke at Arlington Drugstore, or a trip to the Alcoa swimming pool? There is a certain bell tone that takes me back to the horse-drawn Kay’s Ice Cream cart.

These are just some of the highlights of my childhood. I never missed a Santa Claus Parade or a dip dog at Nan Denton’s. You are pure Knoxville if you remember the Market House and the smell of Turner’s fish stall inside or remember Cas Walker and Digger O’Dell. You’re getting pretty old if you shopped at Miller’s Department Store on Gay Street and Sears on North Central. My family did our shopping simply by driving down Gay Street and back home around Sears without ever getting out of the car or spending one dime.

Looking back on it all, Knoxville was a great place to grow up. It has never seemed “scruffy” to me. I called a business in town one day and the receptionist was apparently trying to decide whether to place me on hold and asked, “Are you local?” “Yes,” I replied. “The farthest north I’ve ever been is Morristown and the farthest south is Lenoir City. I joined the Air Force to see the world, and they stationed me at McGhee Tyson Airbase.” You can’t get more local than that.