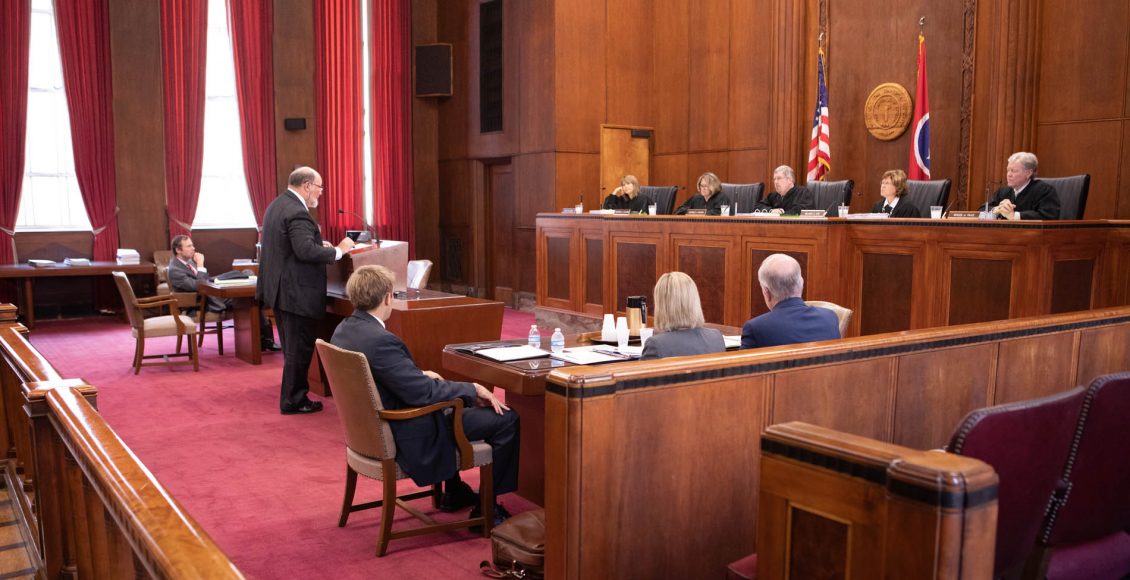 “The right to trial by jury shall remain inviolate.”– Tennessee Constitution

In the 16th century, Shakespeare found that a trial within his plays added drama to his story lines. The Merchant of Venice, Hamlet, and A Winter’s Tale, the last involving a question of constitutional proportions, serve as examples. The Last Juror and The Runaway Jury, legal thrillers by popular author John Grisham, illustrate the role of the jury system in American jurisprudence. In contrast, federal and state courts of appeal rarely involve the theater of literature or even the tension of a real trial by jury, but their rulings can have far-reaching impacts, whether for the public good or, in a recent Tennessee decision, the not so good. As envisioned by Federalist Paper No.78, an essay by Alexander Hamilton which served as a model for the creation of our judicial branch of government, the courts should have “no influence over the sword”, as does the President, “or the purse”, which is the power of the legislature; “it may be truly said to have neither FORCE nor WILL, but merely judgment.” The mark of judicial excellence, of course, lies in the exercise of that judgment.

Rulings at the supreme court or the intermediate court of appeals level, products of either elected or appointed judges with different backgrounds, experiences, and political affiliations, are frequently split decisions governed by majority vote. A 2020 opinion in Tennessee, McClay v. Airport Management Services, LLC, stands as a case in point.

The dispute in McClay focused on a Tennessee law limiting monetary recovery in personal injury cases. Primarily in response to the business and healthcare communities’ support and influence for tort reform, the Tennessee General Assembly passed the Civil Justice Act of 2011. This law, for the first time, limited “non-economic” damages, such as the loss of physical or mental health or pain and suffering from injury to $750,000, regardless of severity. The law included an exception in “catastrophic” instances, which the Act limited to $1,000,000.

Shortly after the passage of this law, Jodi McClay, who was injured in a retail outlet operated by Airport Management Services in Nashville, filed a suit based in negligence in federal court. While seriously hurt, her injury did not qualify as catastrophic. A jury awarded her $930,000 in non-economic damages, an amount in excess of the new limit. Before approving the verdict, federal Judge Eli Richardson, obligated to follow state law, formally asked our state supreme court to determine the constitutionality of the $750,000 ceiling. In 2020, a year many of us would like to forget, our high court, by a 3-2 margin, found that the 2011 Act did not violate our state constitution, and the jury’s assessment of non-economic damages could be capped by our legislature. In consequence, Judge Richardson reduced the jury’s finding by $180,000.

Both our federal and state constitutions underscore the significance of the jury system. First, the United States Constitution, adopted in 1789, includes this unforgettable language in its preamble: “We the people…, in order to…establish justice…, do ordain and establish this Constitution…” At the same time, our Founding Fathers, in order to gain the requisite support from its 13 states, promised a Bill of Rights for every individual, which became effective 1791, comprising the first 10 amendments to the Federal Constitution. The Seventh Amendment guarantees that “in suits at common law where the value in controversy exceeds 20 dollars, the right of trial by jury shall be preserved….” Synonyms include “safeguard”, “conserve”, and “protect”.

The Tennessee Constitution, from the 1796 grant of statehood and its various amendments since, all based upon proper vote of the people, has consistently declared that “the right to trial by jury shall remain inviolate”—this last word being generally defined as “pure”, “pristine”, and “unharmed.” In the McClay case, this provision governed. So long as a provision in our state constitution is not in conflict with the federal constitution, the language of our state is controlling. This explains Judge Richardson’s request for an authoritative ruling by the Tennessee Supreme Court on the propriety of a legislative cap on an award of damages.

From a historical perspective, the right to jury precedes even the Magna Carta, which serves as a model for the individual rights in the federal and state constitutions in this country. This “Great Charter,” declares that the King of England, as the sovereign power, is subject to the rule of law and that the people, while also subject to the law, are guaranteed certain individual liberties, among them the right to trial by jury. In America, which embraced the English tradition, the role of the jury in a civil case differs from that in criminal prosecutions. It is the Sixth Amendment, not the Seventh, that guarantees the right to a jury on criminal charges except for “petty” offenses, which is defined as one involving no more than six months in jail. A “fair and impartial jury of peers” is paramount, however, not only in criminal trials, but also civil trials.

Opinions of jury trials differ. While the right serves as the hallmark of American jurisprudence, other countries often either limit or do away with juries. Although not perfect, some say, no better alternative to our nation’s jury entitlement yet exists. Much has been said and written by proponents on the subject. James Madison, the Father of the Constitution, described “trial by jury as one of the best securities to the rights of the people, ought to remain inviolate”—perhaps the source of the language in the Tennessee Constitution. Thomas Jefferson considered trial by jury as the best “anchor ever imagined by man by which government can be held to the principles of the constitution.” The first Chief Justice of the U.S. Supreme Court, John Jay, wrote that “the jury has the right to judge the law as well as the facts in the controversies before the courts.” Later Winston Churchill observed that “12 honest jurors serve as the safeguard from the arbitrary provisions of the law.” Similarly, British Lord of Appeal and legal philosopher, Patrick Devlin, believed that trial by jury served as the “lamp that shows that freedom lives.” Finally, the vision of the American Board of Trial Advocates, an organization made up of both defense and plaintiff attorneys in civil cases, is “equal justice for all in a vibrant and civil democracy,” and the best means to do so, it asserts, is to “preserve the Seventh Amendment right to civil jury trials for future generations.”

In fairness, the American jury system is not without critics. Humorist Mark Twain wrote that the jury requirement “puts a bar on intelligence and honesty and a premium upon ignorance, stupidity, and perjury.” Tongue in cheek, he maintained that the fair and impartial component is invariably “marked by the difficulty of finding 12 people who don’t know anything and can’t read.” No lesser being that Robert Frost defined a jury as one “consisting of 12 people chosen to decide who has the better lawyer.” Even comedian Norm Crosby has weighed in on the subject: “Justice is in the hands of people who weren’t smart enough to get out of jury duty.” There are elements of truth is each of these views, but our better selves should honor the plain language of the constitution.

Although the 2011 Act by our legislature may have been a well-intended effort to appease the business community, the better course would have been to refrain from intrusion—not only on the enumerated rights of the people but also on the traditional role of the judicial branch. By way of explanation on the later point, trial judges in this state function as a 13th juror in cases of this nature, free to set aside or reduce unwarranted verdicts—safeguards from those rare instances of “runaway” jury award of damages. With respect, the rationale of our supreme court majority upholding the statutory cap in McClay is difficult to understand given the clarity of the words in the state constitution. The late Justice Antonin Scalia, often controversial in his use of rhetoric but a literalist in constitutional and statutory interpretation, issued this advisory well before his death some five years ago: “As long as judges tinker with the constitution ‘to do what the people want’,” or in the McClay instance what the legislature or business wants, “instead of what the document commands, politicians who pick and confirm…judges will naturally want only those who agree with them politically.” The dissenting judges in that important 2020 Tennessee case would have ruled, and rightly so, that the Act of 2011, as it purports to arbitrarily limit certain damage claims, “usurps the jury’s constitutionally protected function of determining damages…unrelated to the facts and circumstances of the claim.”

For the last 225 years, the Tennessee Constitution has commanded that the right to jury, as well as the extent of its responsibilities under the law, “shall remain inviolate.” Plain words. For those who would favor restricting the right to jury under our constitution, there is a remedy. It can be difficult. Our founders meant for it to be. It is called an “amendment.”