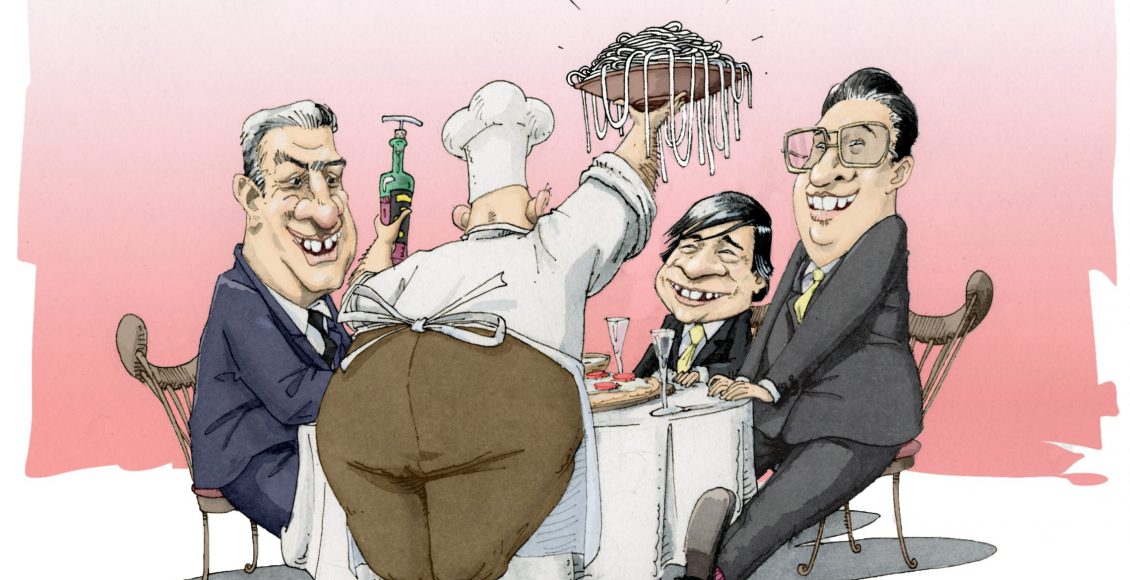 Both men were slow exiting my car. For the first time, my two friends looked like old men. Chubby, the shorter of the two, shuffled to the door, while Wayne appeared weak and off balance. I knew Wayne had neuropathy in his feet and legs and had fallen several times lately, and I reached for his arm to help him out of the back seat. Lunch at Louis Drive-In on Old Broadway sounded like a good idea, but I was beginning to wonder if I’d taken on a bit too much that summer day in 2018.

Time stands still at Louis. The same carpet, same old tables and chairs, and, best of all, the same garlic and pizza smell greeted us. After we were seated at the first available table, things began to improve.

I had wanted this to be a memorable occasion. I wanted to hear our old stories once again. I believe in the healing power of laughter. Laughter was needed, and laughter is what I got.

Chubby has been my friend since 1962 and now was suffering some kind of blood disorder which went undescribed except to assure me that it was not leukemia. Wayne, on the other hand, had several bad things going on, including kidneys, nerves, and occasionally memory problems. I first met Wayne when he opposed me as an insurance claims adjuster around 1973. My client had parked her gray Ford near her place of business and when she returned in the afternoon her car was painted green -windows and all. Wayne’s insured was a painting contractor on a nearby bridge, and the over spray had settled on my client’s car. Of course, Wayne argued that the car looked better painted green. He was even so bold as to insist the value of the car had been increased by the event. We were forever friends from that moment. These two men of character grew extremely close not only to me, but to my wife and children and to each other. Friends for life.

We were so accustomed to each other, the three of us thought and acted the same as we had in our youth. Time had been good to our relationship, but not so good to our bodies and our health. Wayne was always involved in the insurance industry, first as an adjuster and later as the owner of his own agency. Chubby had been a salesman, part-time politician, and, in his later years, a court bailiff.

Our stories had weathered the test of time and, in many ways, gotten better. Details of a good story get richer when artistic license is freely exercised. As Chubby pushed his mashed potatoes around with his fork, he told us once again the story of how he and fellow rowdies Eddie Oglesby and Carl Smithers slipped in the back of the Exhibition Center at Chilhowee Park to avoid paying to watch the Golden Gloves boxing matches. Chubby grew up on East Fifth Avenue and knew his way around Chilhowee Park and all of its unsecured doors. Once inside, Chubby, of course, demanded ringside seats and asked to talk with “Ace” (Miller), the long-time boxing trainer and director of the Golden Gloves. It was then they learned that the Golden Gloves were being held elsewhere and they had broken into the Friday night wrestling matches. That story was typical Chubby and always funny.

Wayne laughed and recalled the time he was refereeing a recreational league basketball game at Chilhowee Park when Chubby entered the game as a substitute player. While Chubby was an “All-South” All Star football player at East High School, he never played much basketball, and when he grabbed a long rebound, he tucked the ball under his right arm and took off running to the other end without dribbling. Wayne said he bent double laughing trying to blow the whistle for traveling.

Wayne grew up in Mascot and played all sports at Carter High School. You need to understand these two knew everybody east of Gay Street by the time they reached 18 years of age, and then as senior citizens knew practically everybody in Knox County. It’s possible you knew them from their membership in area civic clubs or their years of support for the Emerald Youth Foundation, the Boys and Girls Clubs, and Vol football and basketball. Both were charter members of Tennessee Troupe N’ Travel and both were great athletes.

I reminded Chubby of his annual football road trips to non-Tennessee games with a group of close men friends in Blount County. I think it was the year they went to the Army vs. Navy game that the waitress in a restaurant was taking orders around the table and with each entree asked, “Do you want soup or salad?” When Chubby’s turn came, he asked the waitress, “Just exactly how big is that super salad?”

Wayne loved Hardee’s for breakfast and when we traveled together on vacations, to ballgames, or to play golf he always insisted on starting his mornings with biscuits and gravy from the nearest Hardee’s. Once, near Columbia, South Carolina, en route with our wives to Myrtle Beach, I protested. “Why don’t we skip Hardee’s this morning and get some real biscuits and gravy from a mom-and-pop cafe where the locals eat.” Wayne relented and we soon found ourselves driving through downtown Florence, South Carolina, when I spotted the Palmetto Grill surrounded by pickup trucks with South Carolina tags. “That’s it,” I directed, and sure enough Pop was flipping eggs and pancakes at the grill while Mom seated us with a pot of coffee in her hand. It was then that Wayne advised that we had traveled all the way from Tennessee for her biscuits and gravy. Mom then replied, “Honey, we don’t have no biscuits and gravy here. Didn’t y’all ever hear of Hardee’s where you’re from?” I knew then I had a story for a lifetime.

To entertain in a talent show, Chubby once tried to sing and dance to the song “I’ve Got a Brand New Pair of Roller Skates, You’ve Got a Brand New Key.” The problem was he wore a tutu skirt and a pair of roller skates as a costume, and every time he would get into the song, he would fall down. Amazingly, he won first prize just for falling. Chubby was a natural entertainer and loved to imitate Marlon Brando in The Godfather. He would stuff his jaws with Kleenex and bought a tuxedo to wear when performing his routine. Once in Atlanta with a large group of Tennessee fans for a Georgia football game, Chubby caused an uproar and the hotel sent policemen to make arrests for loud noise. When the cops arrived and entered the suite, Chubby never broke with character and continued with his impression to everyone’s delight. No arrests were made, and, in fact, the cops joined us in watching the rest of Chubby’s show.

Wayne loved to sing gospel songs and he and his wife, Ann, could harmonize like pros. When seated next to the Red Hat Ladies Club once in the back room of a restaurant in Prattville, Alabama, we sang along with the ladies as they opened their program with the song “Do Lord.” After the song, they complimented Wayne and Ann’s singing and asked what we were doing in Alabama. I intervened to explain that we were a traveling gospel quartet and traveled the Southland singing in churches and for civic clubs. Of course, they invited us to sing and we performed a rousing version of “Build Me a Cabin in the Corner of Gloryland,” only to be rewarded with a standing ovation. We laughed about that performance for years.

On and on it went. The stories flowed and blood pressures leveled, and the familiar feelings of youth and good cheer crept into our veins. For two hours or more, each of us drifted closer to whole. Talk of our ailments was in the rearview mirror as we laughed all the way home. It was a great day that I will never forget as it reminds me how important it is to take time to enjoy laughing with old friends.

John “Chubby” Watts died December 7, 2018, and his life stood testament to all things good in family, friendship, and love.

Wayne W. Mowery died July 19, 2020, and is remembered as a devoted family man and thoughtful friend to hundreds throughout Knoxville and East Tennessee.