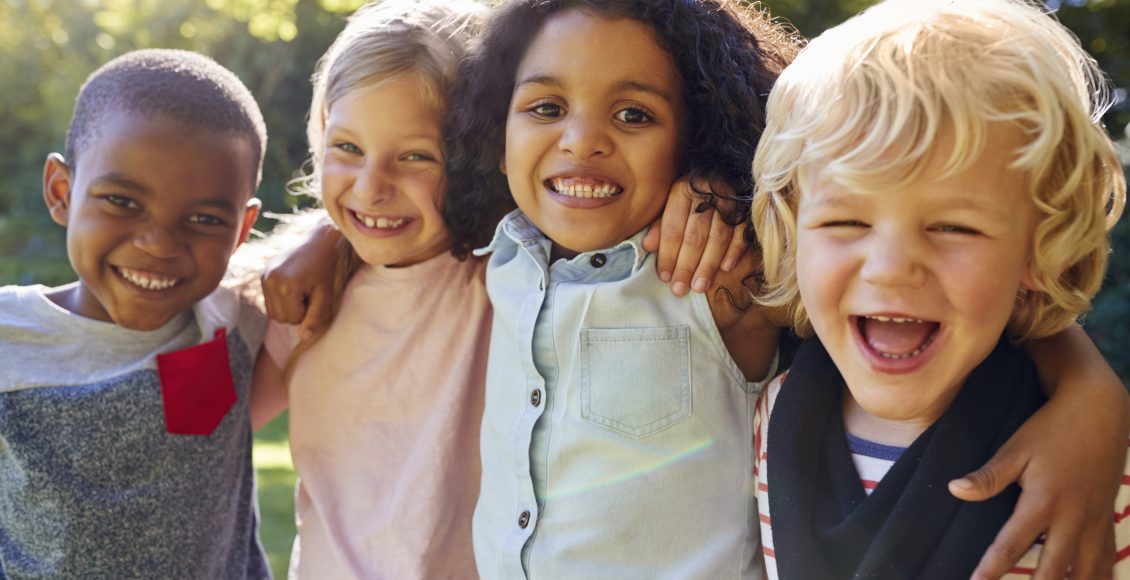 Four kids hanging out together in the garden
Share

Remember Art Linkletter? Now, that’s a
name many have not heard in a long time. For the younger crowd, Linkletter was a host in the early days of television. He had
a great talent for interviewing children and eliciting spontaneous and hilarious answers. Those lucky enough to have black and white TVs would gather around to watch Linkletter try to match wits with
5- and 6-year-olds. I remember I owned a record filled with some of his best interviews. Do you remember the following exchanges?

Linkletter: Stanley, what do you want to be when you grow up?
Stanley: A bus driver or a pilot.
Linkletter: Well, suppose you were a pilot on a big airline and all four engines stopped. What would you say?
Stanley: Our Father who art in heaven.

Then there was the boy who was asked who was the boss of his family, his mom or his dad, to which he responded:

Boy: Both of them.
Linkletter: Oh, you must be a diplomat?
Boy: No, I’m a Catholic-Baptist.

Mark Cheverton was asked what the hardest thing was about school, and his simple response was “buttoning my pants.”

One of Linkletter’s favorite questions was if the child was a character in a storybook, who would they most like to be? One boy said that he would like to be Papa Bear because he could eat lots of honey and Goldilocks would be sleeping in his bed.

Sally gave some good advice when she was asked what she would do if she were president of the United States. Her response, “Keep my mouth shut.”

Roxanne, a young Bible scholar, was asked about her favorite Bible story:

Thinking of Art Linkletter caused me to recently recall some family stories I’ve heard over the years about the darnedest things kids say. For example, I know 6-year-old twin boys in Rome, Georgia, named Court and Sawyer who come up with the most delicious but innocent responses. They were asked what they were going to be for Halloween, and Court said, “A greens keeper” to which Sawyer corrected, “No, Court, A GRIM REAPER.”

Court is all boy and loves military toys. He mostly wears fatigues, and last Mother’s Day his grandfather told him he should “thank BeBe and your mother for everything they do for you – they make your meals and get your clothes ready – they do everything and today is Mother’s Day and you should show them your appreciation.” Whereupon Court marched into the kitchen and said, “BeBe, Mom, thank you for your service.”

The other day Court wanted something and was adamantly refused by his mother. He flopped dejectedly into a chair and buried his head in his hands and sang, “Hello darkness, my old friend.”

Court and Sawyer’s sister is quite prim and proper and possesses no competitive bones. Wren is not an athlete, but a beautiful and intelligent sweat-free child. When she was forced to play soccer last year, her first game did not go well. She stayed far from the fray and made no attempt to get near the ball. At timeout, her mother pulled her aside and demanded that she be aggressive and go for the ball and kick it in the net. Her mother promised, “If you play hard, I will buy you a toy afterwards.” Wren replied, “Mom, let’s go home now and I will give you one of my toys.”

Years ago, when my grandson was about four and in nursery Sunday School, my son went to the nursery after church service to retrieve him and was leading Andy away by the hand. “How was Sunday School today?” my son asked. “Oh, okay. They just talked about God and Jesus again.”

I fondly remember the first time my now-grown granddaughter carried a purse. She was all dressed up and we were at dinner in a fancy restaurant and she had her purse in her lap. I asked her what was in the purse and she explained, “My ‘yipstick’ and a pair of panties.”

A father of young children I know told me about leaving the dinner table one evening when his kids were arguing. When he returned, the argument was over, but a big mess of mashed potatoes was stuck to the wall. “What happened?” Dad asked. The middle child with the spoon said, “It’s a mystery that will just have to be solved later.”

I’m sure you have your own examples of the darnedest things your kids or grandkids have said. Why not write them down when you’re bored with the pandemic and send them to me? Just email them to info@cityviewmag.com. We all enjoy a good laugh, and if I get enough good ones, I will share them in a later article.