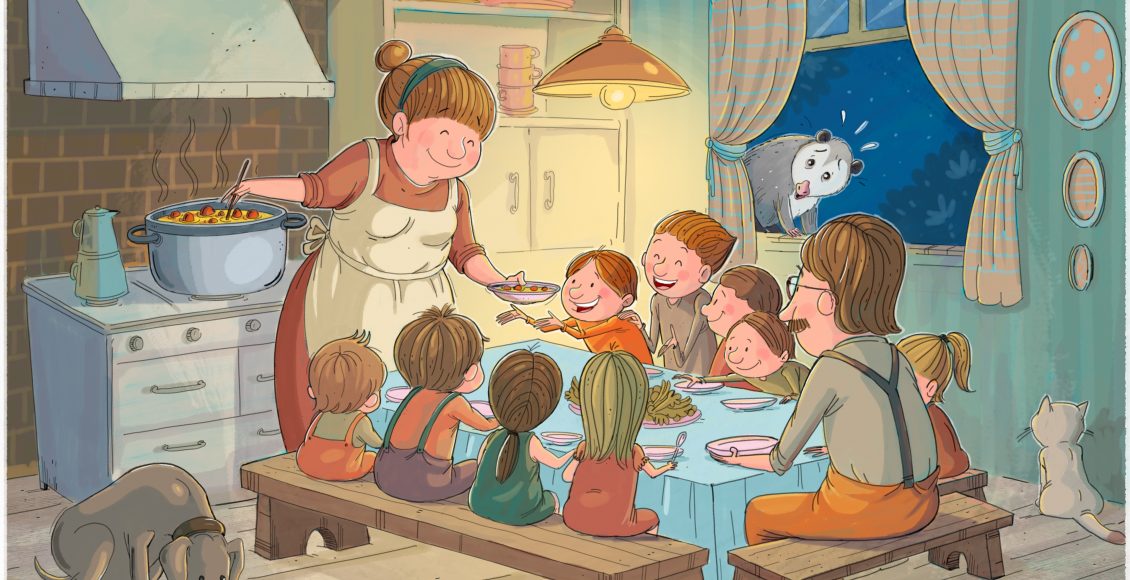 Mountain recollections include a special dinner with the neighbors

In 1950, my father traded a new Ford and $400 to Newt Ogle for a lot on the Middle Prong of the Little Pigeon River in the Emerts Cove community of Sevier County.  Located just outside the Greenbrier entrance of the Great Smoky Mountains National Park and fronting on what people called the “Corner Hole,” the property was a perfect setting for the rustic cabin Dad and Mom finished the following year.  I was 3 at the time.  So, every year thereafter when school was out, my dear mother would pack our clothes and move me and my brothers into what became our summer home – a single bedroom with two bunk beds, no heat or air conditioning, and certainly no TV, but plenty of swimming, fishing, tubing, hiking, and occasional camping.

Not many families lived in the Cove.  In 1935, the Marshalls were the first “outsiders” to arrive, then the Smiths, the Cains, the Barbers, the Hattie Ogles, the Schmutzers, and the Isenberg-Thomas-Murphy cabin partners, all of whom had already built modest summer homes just across the river from the new Wade place.  Some of the “country folks” lived in the area year-round and often came to the Corner Hole well before “concrete” pools became fashionable.  So, it wasn’t long until I met Perry and Ollie Ramsey and family, who owned and worked a small farm at the end of Spring Hollow Road about a mile away.  Their eight offspring, Wanda, Wilma, Helen, Fred, Mayford, Sam, and the twins, ”Big’n” (Ruby) and “Littlin’”(Ruth), all several years older than me, were frequent and regular visitors at the Wade place.  They were so friendly to our entire family even though we too qualified as “outsiders.” I quickly latched onto Mayford, then 15, and tagged along whenever and wherever he would allow me to follow.

After a hard day’s work on the family farm, he would often come by our place to swim or fish, and when the water level was up after a hard rain, he would guide the more adventuresome kids in the Cove down the river, “riding the rapids” in patched-up tire “inner tubes.”  When Mayford flashed that infectious and sometimes mischievous smile, the Wades and almost all other boys along the river were ready to follow, whatever his plan, knowing full well that great fun was ahead.  At full capacity, the Wades and Schmutzers  alone comprised seven of his most faithful followers.

Of course, I thought I was Mayford’s favorite among the four Wade boys, and one day I received a confirmation of sorts when he invited me – and only me — to join his family for a Sunday dinner.

As I best remember, this was my first real social engagement outside of my own family gatherings, and so I was thrilled, to say the least.  Although only five or six years old by then, I have vivid memories of the occasion.  In addition to her garden vegetables, Mrs. Ramsey brought out a big bowl filled with a meat and gravy dish.  I tried some and liked it, and when she offered more, I answered in the affirmative.  At that point, I asked what I was eating.  Before she could answer, Mayford interrupted, “Rooster!” he exclaimed. I took him at his word.

Years passed. Mayford became a state trooper in the area, and I began a law practice. He was good at his job and periodically was called to testify in car accident cases involving clients of my firm. In 1987, after 15 years as a lawyer and including 10 of those as the Sevierville mayor (then an unpaid job few were willing to take), I was appointed to an appellate judgeship with an office in Knoxville.

Meanwhile, Mayford had been promoted to the rank of sergeant. Despite his travels and those of my own over the years, Mayford and I remained in close contact. Both of us had long been married to local girls well “above our raisin’s.” Three or so more years passed before Sergeant Ramsey and wife Dorothy Gene hosted a sizable Christmas party at their new house in Sevierville, which my wife Sandy and I were pleased to attend. During the course of the evening, I joined in a conversation with Mayford and another of his former “followers,” Ed Schmutzer, a fellow attorney who had become an avid hunter by then.

Of course, we began to talk about our good old times in the Cove, all of which were a bit exaggerated by convenient memories. Somehow the subject of the conversation turned to wild game as a food source. Rabbit, venison, wild boar, and even bear and squirrel were named among our collective culinary experiences. I mentioned that a month earlier I had actually tasted barbecued raccoon at the annual supper offered by then House of Representatives Speaker Jimmy Nafieh in Covington, Tennessee. All of us had a laugh about my attendance there because I had been quick to admit that the greasy texture of that little varmint did not suit my palate.

Ed, after explaining that he had tried practically everything else but would never eat ‘possum’, asked if I had ever tried that delicacy.  Just as I answered, “No,” Mayford, who had mostly been listening with amusement until that point, excitedly interjected, “Oh yes, you have!”

Immediately, my mind raced back some 35 years to the “rooster” I partook of at the Ramsey farm.  Need I say more?