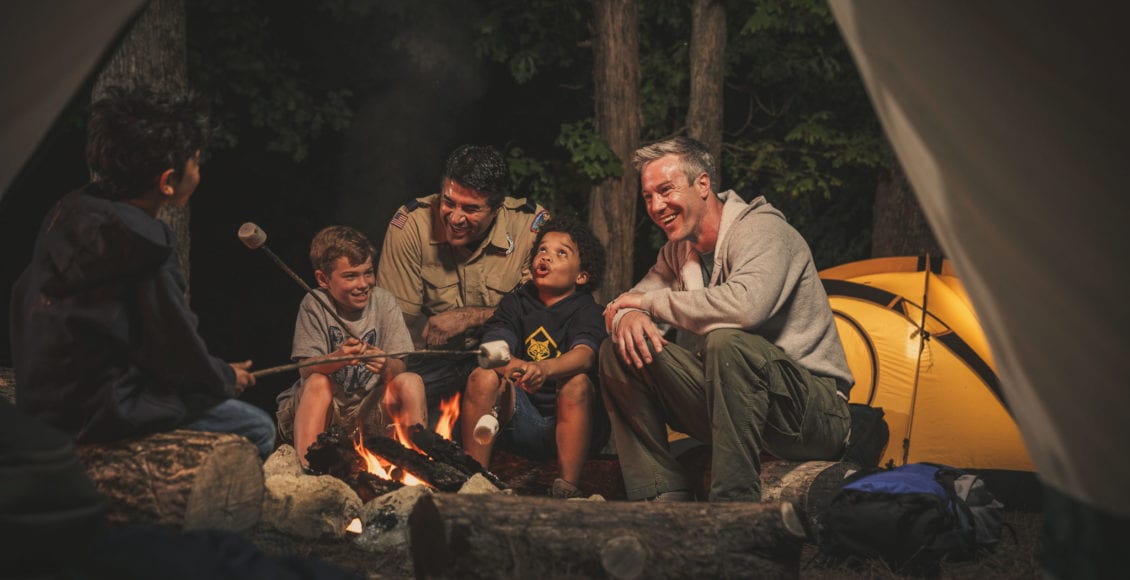 The Next Generation of Leaders

It’s Sunday night in Knoxville and Paul Renier is working diligently to prepare his lessons for the next day. With two other educators at his side, they plan what will be about an hour of educational programming for the following evening, knowing just how much it’s going to serve the youth that will join them. “We will set up stations and four to five students will work together to get through their achievements for the week,” he says.

When Monday night rolls around, Paul jumps into gear, and so does the rest of his family. After all, Monday nights are uniform nights in the Renier house. It’s been this way since 2012.

After a long day of schooling and work, the five members of this busy family are decked in scout uniforms of various kinds and head off to their weekly troop meetings. They are all involved in Boy Scouts of America, or BSA. Mom Sarah, who serves as the committee chair for one of the new BSA girl troops, 13-year-old Joshua, and 11-year-old Olivia are dropped at 6:15pm at their troop meetings after which dad heads about five miles down the road with eight-year-old Chase for their own meeting. Paul serves as den leader for his pack of second graders.

On another side of town, Heather Mazzouccolo and her 12-year-old daughter Sofia head off for their own meeting. The two are part of Girl Scouts of Southern Appalachians and Sofia has been with the same troop for about seven years now, with Heather at the helm as her troop leader. Every other week, the two venture down to the public library to meet up with their troop and participate in activities and discussion. The girls are excited about working toward badges that they will cherish for a lifetime. This is modern scouting in East Tennessee.

Scouting in East Tennessee traces its roots fairly far back. The BSA Great Smoky Mountain Council has been in existence in some form since 1915, with the Girl Scouts of Southern Appalachians forming a few years earlier in 1912.

While the missions differ ever so slightly, at the crux of this work is the desire to grow the next generation of leaders who are confident, compassionate, and positive members of their communities.

David Williams serves as Scout Executive for the local BSA council. He joined the cub scouts as a third grader and has been a scout ever since. “After I came home from the military, I worked for a Boy Scouts summer camp and they said when you graduate, you can work for the Boy Scouts,” he says. “After my first semester, I decided that’s what I wanted to do in life.”

When he graduated, Williams joined the commission as Commission Executive, working with 300 to 500 volunteers and 40 to 50 Boy Scouts groups and Cub Scout packs, learning the basics of this powerful youth program. After 14 years on the Tennessee staff roster, he moved to Dallas for four years before coming back to East Tennessee four years ago.

Similar to Williams, the local Girl Scouts council is run by someone driven by a history and understanding of how critical scouting programs are for youth. “I was a Girl Scout, my mother was a Brownie troop leader, and I loved the experiences,” says local Girl Scouts CEO Lynne Fugate, who joined the organization officially in 2016 after a longtime career in finance. “I believe wholeheartedly in the fact that Girl Scouts is an organization that helps young women explore all kinds of possibilities.”

What’s ironic about these two leaders is that both of their families have been connected to the other organization. Fugate has former Eagle Scouts in her family and Williams’ family has been part of the Girl Scouts in varying ways in the past. And while the two organizations differ in execution and programming, both are driven by the desire to create safe spaces for their youth to work hard, to fail, and to learn. “Lynne and I always say that we think your son or daughter ought to be in a scouting program, you’ve just got to pick the one that’s right for them,” Williams says. “It’s amazing what the programs can do for them.”

One of the most unique aspects of the Girl Scouts programming isn’t the newest cookie flavor, it’s actually the fact that everything is girl-run. During the early years in the program, girls learn about the Girl Scout law, practice the oath, and become familiar with the components. But as they grow, so too do their responsibilities to lead and learn.

“The younger they are, the more leaders have to teach them about goal setting and prioritizing,” Fugate says. With their volunteer leader at the helm, the girls discuss what they will do for the year, what badges they want to earn, and even what it will cost and what they will do to fundraise to make it happen. “We are teaching young people early on that compromise is not a dirty word; it’s a give and take.”

This makes every troop different. In Mazzouccolo’s troop, Sofia and her friends have set the goal to go primitive camping this year. While they might normally work on first aid in their bi-weekly meetings to earn their badge, Mazzouccolo is taking it further. “We’re going a little deeper into first aid, so when we are out in the middle of the woods, they know what to do,” she says. “It’s not just ‘put a bandage on,’ it’s ‘here’s how to wrap a head wound, put on a splint, apply a tourniquet’ and later this year, as most of our troop is 12 or older, they are going to get CPR certified.”

Mazzouccolo’s troop has been together for seven years and she’s noticed the changes. “They’ve gotten more confident in saying what they want to do, learning how to make decisions together,” she says. “They are a lot more self-reliant, and the leadership aspect where we ask them to do something? They do it. They know what’s expected of them and a lot of times they do it before we even have to ask.”

“They give us a lot of time to learn and expand, and meet and experiment,” Sofia says. “We’ve known each other for a long time and it’s more casual now and easier to cooperate as a group.”

Being Part of the Pack

While the format of a Boy Scout troop or pack meeting is a little more formal, the lessons learned align. “If you’ve never been inside BSA programs or don’t know anyone who’s been associated with it, the default is made we’re a camping club or outdoors organization, but that’s just a hook we use with young men and women to bring them into the programs and build citizenship, physical fitness, a duty to guide.”

Most know Cub Scouts and Boy Scouts, but there are three other co-ed programs for ages 14 to 20 that have been around since the 70s. There are High Adventuring programs, where youth have the opportunity to learn to scuba dive, backpack, and even rock climb. There’s Sea Scouting where youth learn to sail, some having even gone on to international meets. And there’s Exploring, where high school students with a desire to be in law enforcement are taught everything they need to know for a career in this field. Finally, there’s STEM Scouts for students grades 3 through 12, using STEM as the hook to learn.

Youth, like 17-year-old Jesse Mullins and his 14-year-old sister Tori, have the opportunity to be in both troops and crews. “When I was growing up, I would go to the campouts my brother went to and more recently I would get involved in events, even crew,” Tori says. “I only joined less than a year ago though.”

For the Mullins family, these groups are simply part of life for them. Even their parents are involved.

“I see them take on a lot more responsibility than most kids their age,” says Gary Mullins, Jesse and Tori’s dad. “They’re going outdoors, learning nature conservation, how to be leaders, how to be self-sufficient. Tori is president of her crew and Jesse has been senior patrol leader and lodge chief. They’ve both done a lot in a short period of time and it makes their dad proud.”

Jesse will move into his senior year of high school next year and it’s his experiences as a scout that have him ready for his next chapter. “In scouts, you don’t just get to do great programs and events, you also get to improve as a person. You learn a lot of things about the person you want to be, the character you want to have,” he says. “And see that by looking to the people around you who are great examples of what kind of person you want to grow up to be.”

As you speak to youth and families involved in these programs, there’s a common theme that continues to show up: familial involvement. Parents reaped the benefits of being in these programs as youth and years later recall the value they brought to their lives. The youth, in exchange, become even more interested and excited about being part of something bigger than themselves. Parents relish in the excitement and join in serving as leaders, committee chairs, and service unit managers training other leaders.

But regardless of the level of involvement a parent can give, they rest easy knowing that their children are part of programs that are encouraging them to try and to lead. And even if they fail, they are in a safe space where they can get back up and try it again.

“All those things that you want out of leaders in your family, in your community, in the nation? That’s really what we do. We make that impact on young men and women’s lives that they’re going to carry throughout their lifetime,” Williams says. “And that’s what it’s all about.”