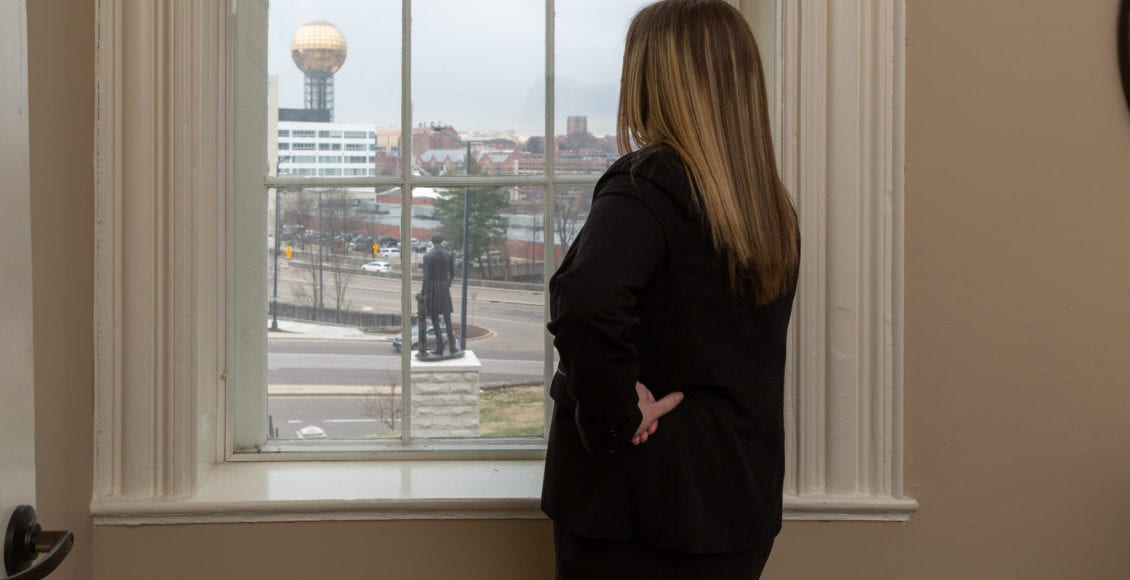 J.D. Vance’s best-selling book Hillbilly Elegy is a fascinating rendition of how the author, during his youth, somehow survived a family background of alcoholism, drug addiction, violence, and failed relationships to graduate from Yale Law School and engage in a career as a writer and social commentator. In 2009, Lincoln Memorial University opened the Duncan School of Law. The hope of the law school has been to identify not only the gifted students, but also those students with a strong work ethic and a passion to enter the legal profession.

Although LMU’s Duncan School of Law is not yet on par with the reputation of Yale, at least one of our recent graduates has overcome a family background remarkably similar to the one Vance describes in his autobiography. Let’s call her Marye. She grew up in rural East Tennessee. Her mother, who was pregnant by the time she graduated from high school, married her father, a high school dropout. When Marye was five and her older sister 10, the marriage, marked by verbal and physical abuse, came to an end. As in the case of Vance, Marye’s maternal grandparents became the stabilizing forces in her life. They took Marye to a church she eventually joined, attending every Wednesday night and Sunday morning.

Within a year of her parents’ divorce, Marye’s mother remarried a man who had two children of his own. A truck driver, he sustained a back injury which led to surgery. A Social Security disability check became a supplemental means of support for the family during Marye’s childhood. His prescription pills for pain, however, led to addiction. This marriage was also plagued by instability, contentious relationships, and poor health. At the death of her second husband, Marye’s mother, who had until then been a steady source of support, began to suffer from depression and became dependent on prescription drugs, which ultimately led to her abuse of other drugs—prescribed and illegal. From these family experiences, Marye says, she “mostly learned what not to do.”

During these years, Marye, a good student from the start, had changed schools three times between kindergarten and junior high school. As a youth she enjoyed sports, playing soccer, softball, and basketball. By her junior year in high school, she became the team’s post player. Her season was interrupted, however, when she became pregnant by a student from another school. Marye chose to give birth. She knew that some looked down on her for her decision and, as a result, she lost many of her friends. Home schooled for the last four months of her junior year, Marye received encouragement from her Algebra teacher and a Spanish teacher, who helped her maintain good grades during her absence. She was able to finish high school, but gave up athletics her senior year to concentrate on her studies and to spend as much time as possible with her new little girl. By then, Marye had graduated magna cum laude, and the University of Tennessee awarded her a full academic scholarship.

The move to Knoxville was not easy. Marye, on her own for the first time, worked at a restaurant and then in child care to help cover expenses for her and her daughter. The father of her child offered no support, and so she relied on student loans. At the same time, Marye’s mother’s life began to fall apart. Fortunately, Marye eventually developed what has become a long-term relationship with a man who helped her and her daughter throughout most of Marye’s undergraduate years. Although an honors graduate at UT, she was denied admission to its law school because of her mediocre LSAT score. Determined to become a lawyer, she applied to Charlotte School of Law, an aggressive for-profit institution, which readily agreed to accept her as a student.

She made good grades there, but was disappointed with the quality of her education. Moreover, she missed the emotional support her boyfriend provided. Marye lost credit hours by her transfer to LMU, but when the Charlotte school closed, she knew she had made the right choice. Continuing to work part-time and a source of support for her daughter’s education, she took four more years to graduate. A solid student, Marye received her diploma in December of 2017. Determined to sit for the bar but constrained by her work schedule, she prayed about whether to take the February bar exam or to wait until the July exam, when her daughter’s school year ended and Marye had more time to study. To this day, Marye believes that God provided the answer by sending a rock through her car windshield as she drove away from campus after a meeting with her academic dean. With the time to commit to LMU’s preparatory classes, she passed the exam on her first try.

Abraham Lincoln practiced law for twenty years and yet never spent a day in law school. Born into poverty and having lost his mother at a young age, he overcame these obstacles by learning to read, cherishing books, and adopting a remarkable work ethic. Eventually, he studied the law. In an 1860 letter to John M. Brockman, he advised, “The mode [for success] is very simple, though laborious, and tedious . . . . Work, work, work, is the main thing.” Marye agrees. In November, she appeared before the Tennessee Supreme Court, took the oath of office, and was admitted to practice law. Her grandparents, joined by her mother, sat proudly on the front row. Naturally, Marye wants to practice family law. With her life experiences, no one could be better prepared to understand the kind of domestic troubles Vance so aptly described in his book. Marye’s educational costs, especially during her time at Charlotte, have been substantial. But like Lincoln, she has no fear of hard work, and is driven by her past experiences. “God has a way of working things out for His glory and our good,” she says, “and I plan to start reading Hillbilly Elegy today.”  I expect this story to have a happy ending.

Editor’s Note: In February, Marye accepted a position with the Department of Homeland Security.