The Four Horseman of the (Political) Apocalypse 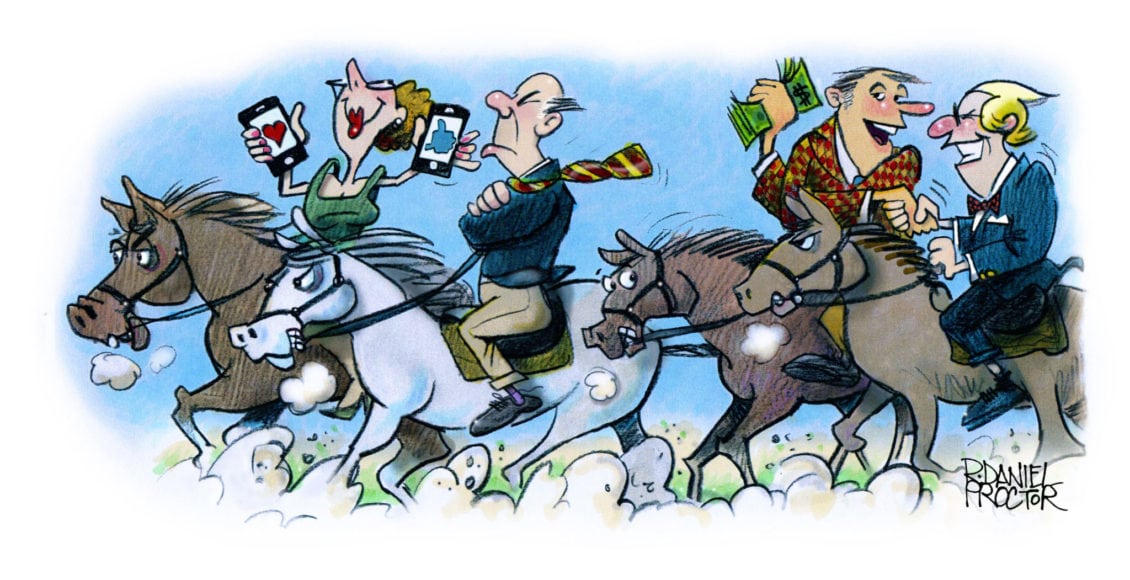 Feeling more uncomfortable by the minute, I sat in a major bank’s executive dining room with a newly-elected political officeholder. As an advisor to campaigns and candidates, I attended at the winner’s invitation.

As flattery-laced praise and congratulations flowed, a bank official made a tentative joke about the vanquished opponent. Another bank official joined in the fun at the loser’s expense. More jokes and derision followed. The officeholder-elect participated, not in a mean way, but enough.

Eventually the talk circled around to the purpose of the meeting: the bank’s leaders, who were of course big supporters, looked forward to a great relationship.

As we left the building he said, “I thought that went fine.”

“No,” I said. “It didn’t. If you’d lost they’d have been with the guy you beat making jokes about you. And they’ll share with other people what you said, not what they said. Don’t let flattery convince you they’re your friends. They’re not.”

With various local, state, and national elections held over the last several months, there are a good many newly-minted elected officials running around. Each of them faces the same four challenges to overcome: Flattery (example above), Arrogance, Money, and Friends.

Arrogance: An ever-present danger for political officeholders is believing that they are as special, brilliant, and amazing as they are described when being introduced before giving a speech.

Arrogance doesn’t necessarily mean a massive ego demanding to be noticed and assuaged. Former Tennessee Gov. Don Sundquist is a truly friendly and thoughtful person. But political arrogance saw him leave office in 2004 as one of America’s most unpopular governors.

For years Sundquist vocally opposed a state income tax. However, when he decided he wanted one, it was with an I’m-the-governor-and-you’re-not campaign.

In a conversation at that time with a Sundquist communications staffer, I said, “Even if he thinks it’s necessary just because he decides to turn on a dime it doesn’t make people idiots if they believed him the first time.”

WMC-TV’s post-election coverage of the Van Hilleary-Phil Bredesen contest to succeed Sundquist noted that “Each candidate suggested his opponent most resembled unpopular lame-duck GOP Gov. Don Sundquist, who flip-flopped to support the income tax after he was re-elected in 1998.”

Money: Money is the mother’s milk of politics—and its worst curse. The political landscape is littered with the dead and decayed careers of political officials who couldn’t keep their hands out of the till.

Perhaps the most egregious example of filthy lucre’s siren song is the tale of former Knox County Trustee Mike Lowe. At one time a county Republican power, Lowe in 2015 pleaded guilty to paying two “ghost” employees taxpayer-paid salaries, overtime, and benefits for performing little or no trustee office work. Lowe served seven months in jail and must pay back more than $200,000.

Money does change everything. In politics, often for the worst.

Friends: I have on more than one occasion said to politicians that their greatest dangers often are not posed by enemies, but by their friends.

Friends come with earnest funding requests for that pet project or indispensable (they’re always indispensable) favorite cause. Sometimes the projects are genuinely worthwhile; sometimes not. The worst case: taking care of a friend’s desire can wind up on the front page or leading the evening news.

If friends have requests, there’s money in the budget, and what they’re asking isn’t illegal, immoral, or unethical, why not? But bear in mind it can be like feeding seagulls on the beach: it attracts a crowd of others wanting a piece of the action.

Here’s a test: when friends come calling with their wonderful ideas, if it doesn’t fit your agenda, say no and explain why. If they’re your friends, they’ll understand. If they aren’t, they are seagulls seeking a cracker.

Flattery, arrogance, money, and friends: the Four Horsemen of the Apocalypse, politics-style.