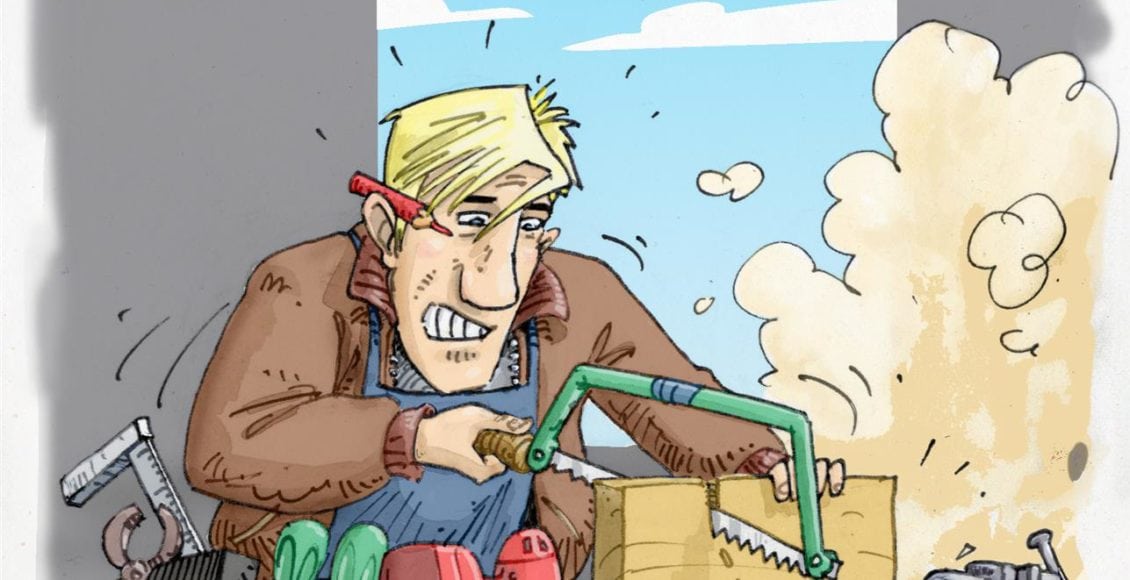 We’ve been so inspired by Do It Yourself shows that we’re getting ready to start on our first project, gutting our kitchen and putting in a new one—just like Chip and Joanna! Any last-minute tips?

The Knoxonomist’s first tip is to hire professionals, just like Chip and Joanna! It’s nuts to think that TV personalities on home improvement shows do much except pose for set-up shots as they swing a sledgehammer or drive a nail. They have whole teams of experts in the background hanging drywall, or making sure the cabinets are secured to the wall and level, or plumbing a kitchen correctly.

Have you ever tried to hang and mud drywall? Do you have any notion of what mudding drywall means? You’ll surely encounter it in your kitchen remodel. Look it up on YouTube. Go right ahead: hanging, taping, and mudding drywall. Then give it a try. The Knoxonomist will wait, and while we’re waiting will recall when he first attempted the task.

In the late 80s, the home of a woman the Knoxonomist was dating, with whom he was experiencing that rare and jealousy-ridden love of a man in his mid-twenties, was flooded. It was decided that the place had to be ripped down to the studs and floor joists—followed by the installation of new subfloor and drywall. The young woman happened to have friends in the construction industry, and the Knoxonomist found himself in a jealous corner, unwilling to not show up for construction yet uncertain of his abilities.

Demolition day went without a hitch, but the next day was an unmitigated disaster. Forced to choose between using a screw gun that looked like a jackhammer to install flooring, or to perform the seemingly easy task of taping and mudding drywall, the Knoxonomist chose the latter. And regrets his choice to this day. With a bruised ego and clumps of mud in his hair, he slunk away from an unacceptable job that had to be redone by a professional. Instead, he went to collect beer and sandwiches for the crew.

Doing any complicated construction job correctly requires watching an expert, assisting an expert, then trying it on your own only when you: 1) have enough experience, 2) have help from someone who isn’t your spouse, and 3) have the right tools.

By all means, learn to do your own work. But start with the small stuff and work your way up. Otherwise, you’ll end up with a bruised ego, buying beer for the experts you will inevitably hire.

The Four Horseman of the (Political) Apocalypse