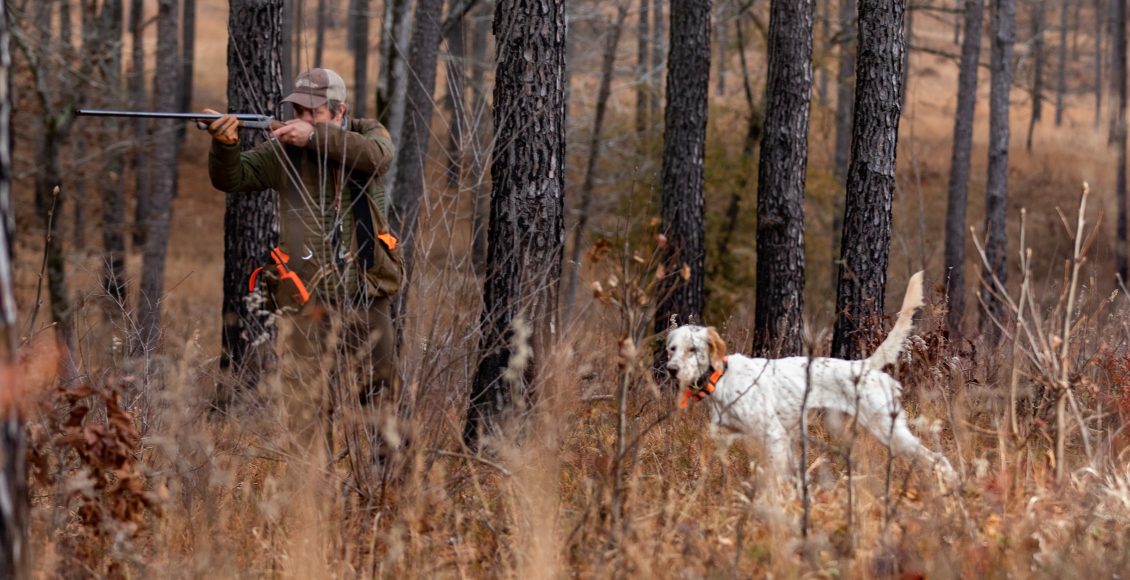 As a young man, I loved four things: hunting, fishing, camping, and canoeing. My time indoors was generally spent planning or preparing for my time outdoors, where I happily spent the majority of my youth. Within a year of graduating high school, I was a partner in an outdoor outfitting enterprise, Mountain Quest. There is nothing better than living your dream every day. When my son Troupe, already an avid fisherman, began expressing an earnest desire to hunt, I started searching for places like my dad took me. He always seemed to know those sweet spots where the magic would happen. Times have changed. Private locations are not as accessible as they once were, and I needed a contact that knew the lay of the land. After a few phone calls, I had the right name. John Burrell, owner of The High Adventure Company.

John agrees to meet us at the company’s Soque River lodge. With the memories of trips with Dad on my mind, I find myself driving through North Georgia with my son. As we wind along those two-lane backroads, I know I wouldn’t be the man I am without my father having invested his time in making sure I experienced everything he could share, and I have done my best to pay that forward.

The fall in North Georgia is magical, and on that day the sun is shining, and the air crisp. A winding gravel lane leads up the hill to overlook the river with the mountains in the background. At the lodge, Troupe and I are greeted by John, who is rigging up his fly rod. John has a way about him that instantly puts you at ease, and I can’t say that I have ever felt more comfortable with someone I just met. Life’s funny that way; those moments when things just work, call it what you will, but sometimes you just know when you have found a kindred spirit—this seemed like one of those moments.

John is a legend in the sporting world. Thirty years ago, while I was trying to make my mark in business, John was building relationships with the owners of some of the premier hunting and fishing destinations in the world.

Today, his company is the authority on where to go to experience world-class hunting and fishing, offering over 25 different top-shelf experiences on three continents. You may have seen him on the Emmy Award-winning television series, Brush Country Monsters. His company, The High Adventures Company, manages some of the finest locations in the world, specializing in what he says is “not just a hunting or fishing trip but best-in-class experiences.” John and I had spoken by phone a few weeks earlier, and after the call I was excited to learn his story.

At its headwater, the Soque is a mountain stream. Hardly wider than a single lane road in most places, it is easy to wade and its winding nature offers great pools where monster trout—we are talking double-digit huge fish—are said to lay in wait. John describes what’s in store, but as we roll along it’s difficult to imagine such a small stream having that level of quality trophy trout. We spend the day fly fishing while laughing and sharing stories of our past sporting adventures. I watch as John patiently works with Troupe, coaching him toward his first trout on a fly. It would be difficult to pick a single word to describe John at that moment, but his passion for the outdoors and the people he guides is admirable.

Entry into the stream is comfortable, but the gin-clear water offers little cover; these fish are wary wild trout. Within minutes, though, I am hooked up to the fish of a lifetime, a nice rainbow trout, which John estimates is around 10 pounds. It’s an exhilarating feeling, landing a fish that size on a tiny number 16 nymph. In my opinion, this is the most fantastic trout fishing east of the Mississippi. I have fly fished all over the country, and this is a genuinely stellar stream. With four miles of completely private fishing, this is a dream trip.

That night over bourbon, I get to learn a little more about what makes John tick and why his company is so successful. He decided to pursue this as a career in college. Starting as an intern at Burnt Pine Plantation fresh out of college, he soon helped form The High Adventure Company to manage sporting properties and as the booking agency for other sporting facilities. The similarity of our early exploits was mildly ironic. He worked on dinner as we talked, bragging that the mushroom gravy recipe he was concocting was every bit as good as the trout fishing. True to his word, the meal was incredible, and as the bourbon flowed throughout the evening I listened to the richness of his stories with great interest. I can tell that the company’s success is due to more than just a great fishing or hunting experience; after all, Mother Nature doesn’t always cooperate. So, what keeps clients coming back year after year? John tells us that it’s the fact that he offers the best in class across the entire experience, from staff to lodging and food. “Nothing is left to chance when it come to caring for our guests, it’s 5-star all the way.” That best-in-class approach to the sporting world even prompted  Auburn University to ask for John’s guidance in creating a entirely new major—wildlife enterprise management—which has become one of the university’s most popular majors. It makes sense that a high-level education would be an asset in bringing this level of operation into the remote areas where the company operates.

I wondered, too, about what continues to inspire John to deliver this level of service to his customers. Aside from his love of the outdoors in general, one of the things that drives him is the people that come for the first time. “Taking that first time hunter and seeing the excitement in his or her eyes or introducing someone late in life that otherwise wouldn’t have the opportunity,” he explains, “is really more enjoyable to me than the hunting itself.” That’s a big statement from a man who has been able to hunt all over the world for pretty much anything.

So where would he take someone who wanted to learn to fly fish? “I would take them out into the yard and teach them how to cast. That way when they get to the river, they can really enjoy the process and eliminate a lot of frustration.” The bourbon flowed freely, and I was beginning to understand why all of John’s clients feel so special in his presence.

We talked for some time that night, concluding that Cityview and The High Adventure Company would partner over the next year or so to bring these adventures to our readers with articles and videos. If anyone is interested in booking a trip while we are covering a location just drop us a line and we will share our schedule.

Our conversation that evening was the inspiration for a cover feature, and it was off to Barnsley Resort for a photo shoot. Barnsley is an easy drive from Knoxville, about two and a half hours, just south of Adairsville. The pictures on the website don’t do justice to the magnificence of the venue and the thousands of rolling acres of broomsedge grass that make it the perfect setting for quail hunting. The Barnsley experience, like all of their other offerings, is best in class and everything you need will be provided. The Beretta Shooting Grounds quail and skeet facilities are sponsored by Beretta Firearms, and as I walk into the pavilion, a case of beautifully engraved shotguns complements a welcoming fire.

Listening to John’s English setter Lucky’s enthusiastic yelping coming from the kennel is like a deja vu visit to my first bird hunt and early memories of my father’s bird dogs.  Lucky bounds from the kennel exactly as I remember our English pointer doing so long ago. Soon we were off, Lucky leading the way. Watching a dog at this skill level come to point is a breathtaking moment, and Lucky is as still as a statue, carved in perfect unmoving form, informing us of the birds. This is a hunter’s dream moment and to get to capture this on camera is an honor.

We spend a truly memorable day, hunting quail, taking a few shots at the 1,000-yard rifle range, visiting the skeet facility and, of course, enjoying a five-star lunch served at the hunting pavilion. As the sun sets over the North Georgia mountains, John and I sit down to discuss some of our upcoming articles.  We talk about Tipiliuke, the company’s flagship location in Patagonia. The lodge is situated on 50,000 acres and boasts some of the finest trout waters in the world with private access to nine miles of the Chimehuin River and three miles of the Quilquihe River. Located in the foothills of the Andes, the Estancia’s site offers a variety of other activities. Hunters can enjoy red stag, wild quail, Russian boar, and trout fishing all in one grand-slam trip in a truly picturesque setting, and for the rest of the family there is mountain biking, skiing, horseback riding and more. The lodge has received numerous awards including being voted “World’s Top Fishing Lodge” by Sporting Classics Magazine. The borders aren’t yet open but hopefully soon. Until then we will focus on the stateside locations in Texas, Nebraska and South Dakota, for some deer, boar and pheasant hunting. We are truly excited to have the opportunity to share John’s vision and these adventures with you.