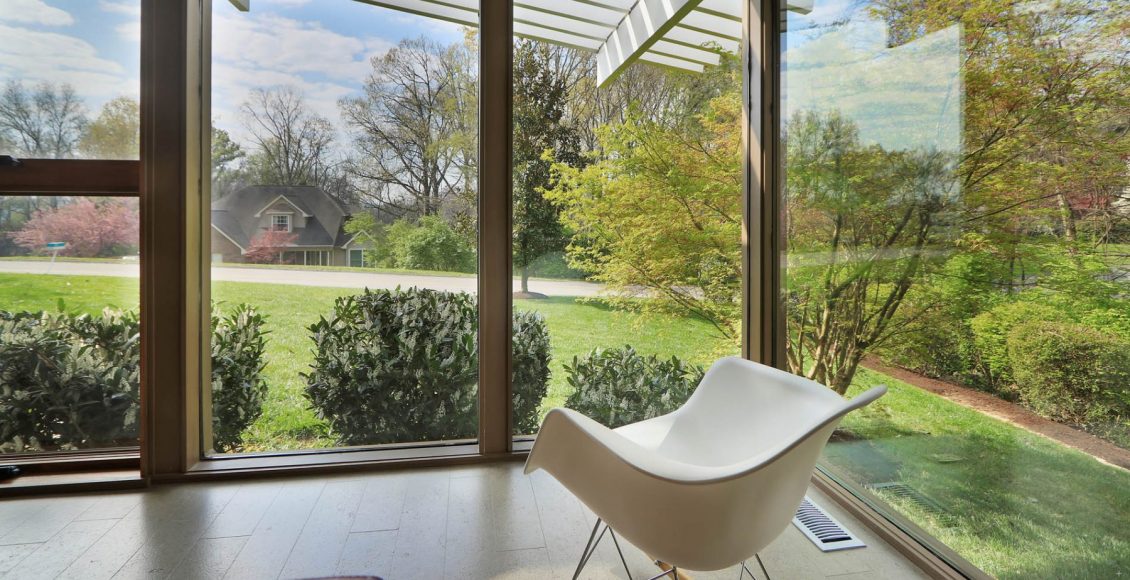 It was 2013 when award-winning California architect Robert Nebolon placed one of his mid-century home designs on houseplans.com. The plans lived virtually for a year as just a dream. But in 2014 Nebolon received an email that would turn his plans to reality right here in East Tennessee.

When Anne and Scott Wilkerson saw Nebolon’s house plans online from their Knoxville home, they knew they wanted to work across nearly 2,500 miles with the architect. The two are East Tennessee-born and have worked many years for HGTV in Knoxville: Anne as Director of Brand Marketing Operations, and Scott as Digital Workflow Engineering Manager.

After previously living in a 1980s home near Dutchtown Road in Knoxville, then renovating a west Knoxville home in 2008 which they later sold after the Great Recession, the Wilkersons were ready for a change. Neither house came close to the mid-century modern design “that we had a feel for,” Anne says. “What turned us on about mid-century is its cozy warmer feel.”

The couple found a lot in Concord Hills, “a neighborhood we had wanted to live in,” Anne says, and began planning. And luckily, there were no extensive architectural restrictions for new homes.

When the couple came across Nebolon’s “Palomino House” online, they loved what they saw: the 1950s Eichler-inspired plans showed them what a mid-century modern home would look like today. Nebolon, who founded Robert Nebolon Architects in 1994 in the San Francisco Bay area, explains the style: “A new Eichler-inspired house where you move some rooms around and modify here and there—well, it’s like taking a ’66 Mustang and adding AC and putting it on a modern road. It’s not retro. It’s timeless.”

Joseph Eichler was not an architect or designer, but rather a developer who found himself inspired by Frank Lloyd Wright. Eichler was a 20th century post-war American real estate developer who became known for creating distinctive residential subdivisions of mid-century-modern-style tract housing. He built a company that from the 1950s through the mid-1960s made more than 11,000 affordable houses in Northern California.

Eichler hired local modernist architects to design homes that were different from traditional architecture. Unlike their counterparts, his mid-century homes boasted open spaces, glass facades, and a feeling of freedom in what felt like larger, uncluttered spaces. These homes brought nature inside.

Anne describes the feel: “These homes fit into the landscape. With the amount of light from so much glass built into the design, you feel like you’re sitting in the outdoors.”

With an adoration for Nebolon’s Eichler-inspired designs, the Wilkersons reached out, ready to buy the plans, and a long-distance relationship began.

Excited to work with the couple, Nebolon redrew his plans to accommodate a basement, home theatre, gym, and offices, making up a 3,800-square-foot home. It required more site planning as he figured out how to work around their new property’s slope. However, Google maps helped as he worked on the plans, and email and texting were added bonuses. “Great communication made this project go smoothly,” he says.

Nebolon prides himself on bringing a “sense of stability” to the process with his clients, ensuring couples, like the Wilkersons, can count on him; if there is ever an issue, he ensures it will be handled well. “I’m always here to answer questions.”

Those statements couldn’t prove more true as he leaped into working with clients miles away in Tennessee. “It’s a leap of faith to hire an architect, so you want the homeowners to have faith in the work, and it’s especially true working long distance.”

Meanwhile, the couple searched for their builder—someone who also shared their vision in making these plans come to life.

They found that in Knoxville builder Matt Noss.

A Little Weird and Wacky

Raised in Australia, Noss—who founded Matt Noss Construction in Knoxville in 2004—is undaunted by design challenges. He says so with his bold brand statement on his website: “Lakeside, mountainside, anywhere is possible.”

Noss is committed to bringing the best value for his clients. “I think an important aspect for me to share is that a lot of my homes don’t have high-end budgets,” he says. “I work hard to find creative ways to help people realize their goals and dreams. I go the extra mile.”

Having never built what he calls a “Knox-box” house, Noss was a perfect fit for the Wilkersons.

“We wanted a builder who shared our dream,” Scott says. “Matt had grown up around these types of homes, and he had built a lot of post and beam homes in the Gatlinburg area.” They were off to a great start.

Noss was particularly excited to start in to such a bold new project. “I’m always trying to do a little something unique, and this was my first mid-century home,” he says. “I get a kick out of new and different projects. I’m kind of weird and wacky in that way.”

And he is no stranger to a challenging job—even if it means working with an architect completely across the country. In fact, he welcomed it. “Robert Nebolon took the design under his wing and developed the site plan, making the project go so smoothly,” Noss says.

Shifting a California design to Tennessee did require some alterations. The house would see changes in finishing materials, different wood species in Tennessee from those in California, building codes, as well as homeowner preferences. But Noss was enlivened by the challenge.

“I love that figuring-out part of working with homeowners’ ideas and when their minds change,” he says. “What suits one person doesn’t another, so I like to adapt. I want to go with peoples’ vision.”

Nebolon’s drawings were completed for California codes, so Noss deciphered them for Tennessee. But in Nebolon’s mind, he knew a house drawn to California codes could withstand nearly anything.

“We got on really well,” says Noss, of his time working with Nebolon. And the admiration was mutual. “Matt Noss understood how the house was to be built before we started,” Nebolon says.

There were challenges. The house plan was essentially created for flat land in California, but would now be altered for the hills of East Tennessee. So the first challenge to tackle was positioning the house on a nearly one-acre, sloped site.

“We wanted to center the home and also wanted some usable flat land on this very slanted lot. So we built a 50-foot-long retaining wall to do this,” Scott says.

The wall enabled the homeowners to have some land for a grill and patio and—yes, a stunning waterfall.

Then there was the weather. The build began in November 2014; the couple moved in by fall the following year. Scott recalls the frigid winter during construction, which he noted on knoxvillemodern.com, the construction journal he created to chronicle the process.

“When it was time to pour the footers and the foundation in early 2015, we had 35 days of freezing weather, putting a delay in the build schedule,” Scott says. “It was one of the coldest winters here ever.”

One big goal for this home was to be energy efficient for the 21st century. That meant foam insulation throughout the walls and roof, a high-efficiency variable speed HVAC system, and high-efficiency glass for those walls of windows that surround the home.

“We don’t even turn on lights in the day with all this natural light and skylights in many rooms,” Anne says.

For greater insulation, the homeowners chose Knoxville-based Clinton Glass for their double-paned UV-coated, gas-filled windows. “Our heating and cooling are a modest cost,” Scott says. “In the 1960s, there would have been space heaters in these homes. A new mid-century home enabled us to build in efficiency.”

It paid off. The team that conducted the blower door test shared that they had “never tested a house like this,” commenting on its impressive test results.

Blower door tests help determine how air-tight a home is. A blower door is a powerful fan that mounts into the frame of an exterior door. The fan pulls air out of the house, lowering the air pressure inside. The higher outside air pressure then flows in through all unsealed cracks and openings. “This is one tight home,” Noss says.

With such a strong house design came strongly designed finishings right down to the aqua colored “modbox”—a modern mailbox perched out front of the house—and Nebolon praises Anne and Scott for choosing wonderful colors and finishings. The light fixtures came from a maker on Etsy. Tile walls surround their living room. White-washed knotty pine line the vaulted ceilings.

This home is full of texture and special touches. There is warm cork flooring throughout the home that Noss finds particularly unique. Anne and Scott and their son easily interact throughout the space, reflecting the openness of this three-bedroom, two-and-a-half bath home.

Anne wanted to add another dimension to the kitchen by cutting the tiles and designing a pattern for the backsplash. “I bought three colors of the tile at Tile Sensations on Sutherland Avenue.” She cut the tile and laid them out, making the design custom and giving the backsplash more interest. “I think it came out great and makes the kitchen unique.”

A Verona range with double ovens, built-in microwave, and coffee maker allowed the couple to keep countertops for meal prep.

Then there is the Rinnai tankless water heater, which makes long showers possible—something this family enjoys.

The interior palette includes colors of the woods, like bark, adding aqua as an accent. It all fits in with nature’s hues.

The couple chose fiber cement siding, an unusual choice that can come in different patterns and colors. Calling the exterior crisp, Nebolon proudly describes it as “looking like a well-tailored suit.”

All the site preparation of placing the house correctly on the lot was time well spent, allowing for decks around the house and a patio.

His Only House East of the Mississippi

Nebolon never thought he would see the Wilkersons’ home so soon after it was built. And if it hadn’t been for winning HGTV’s “Fresh Faces of Design” award in 2015 for another project, he might not have. Nebolon came to Knoxville to accept the national award, and of course, made a stop to see his dream turned reality.

“When you drive up to Farragut to the subdivision, there is the house. It sits up on a knoll like a little temple. It sits there so calmly, with great repose. It stands out in the neighborhood,” he says. “It’s my only house design built east of the Mississippi.”

If you asked someone after the build about the home, they might tell you it is a restored old mid-century home, but in fact this one is modern and new. Palomino has been Anne and Scott Wilkerson’s dream home, and to think they found it on the internet.

Today, the couple and their 11-year-old son, Liam, begin another journey, moving to Colorado for exciting professional opportunities and a new life together.

The couple is looking for a mid-century house in Denver, Anne says. “We know that one is there for us.”

Mary Leidig is a former newspaper journalist, now a marketing and branding strategist who loves telling the stories of Knoxville and East Tennessee as a freelance writer. She also loves anything outdoors with her husband and family—biking and hiking on Knoxville’s greenways and in the Great Smoky Mountains.

A Problem Staring Us In The Face