The Selfless Adventure of a Lifetime

Stan Brock and Remote Area Medical bring health care to those in need. 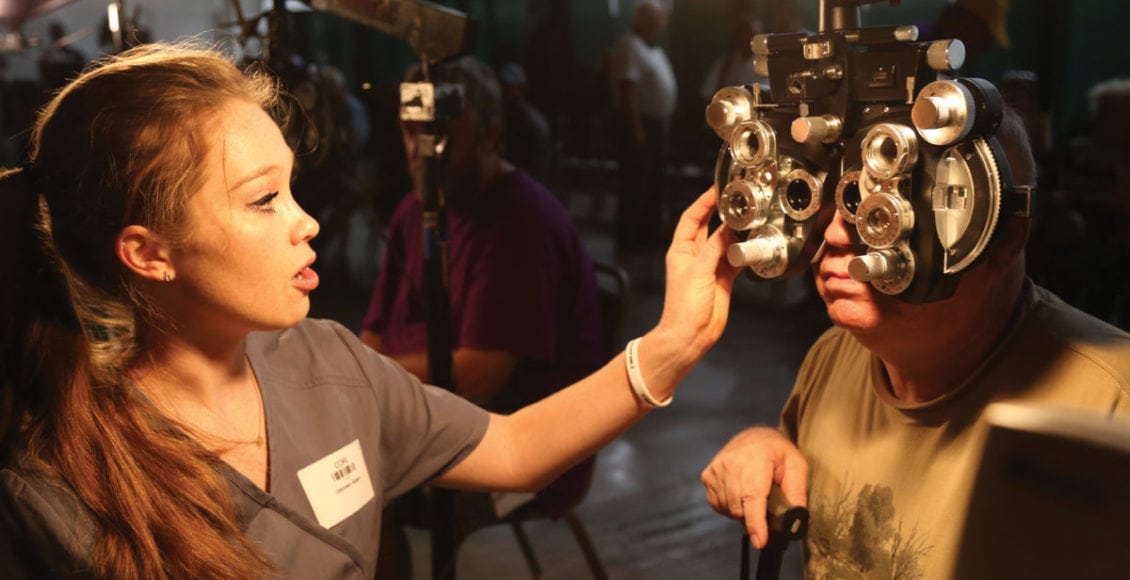 It was the early 1950s. A young man from Lancashire, England found himself in the wild frontier of Guyana, South America, in search of becoming a cowboy. Longhorn cattle and mustang roamed the nearly three-million acre spans, as the inhabitants of the region, the Wapishanas, lived among them.

“After I’d been there quite some time, I learned the language and the things that cowboys did, like make their own saddles and lassos, and chase wild cattle across the savannah,” the man later recalled. “It was all quite wild and adventurous.”

Nothing proved more wild than the young man’s first ride on his mustang, a ride that resulted in his being thrown from the animal when it collided with a corral. He was badly injured in the collision, but the nearest doctor was 26 days away.

With a strong will to live, the man survived, but he made a vow that he would one day bring medical aid to remote areas of the world, like Guyana. He soon learned to fly an airplane and began making access to medical care a matter of a few hours for his South American home.

Little did he know that this would one day be his calling and he would engage thousands of people in the work.

Birth of an Organization

Fast forward to today, and that cowboy-dreaming, airplane-flying English man, better known as Stan Brock, has quite the robust life story to tell.

Brock moved to the United States to film the television show “Mutual of Omaha’s Wild Kingdom” beginning in 1963. Throughout his years filming the show, he was given the opportunity to travel to different areas of the world, observing not just the wildlife but how people lived.

“I realized that there were people like the Wapishanas that didn’t have access to healthcare or couldn’t afford it,” Brock says.

The show ended in 1972, and, after some time spent doing a second television series and a few movies, Brock settled in Knoxville and formed Remote Area Medical. It was 1985 and he was determined to provide his own answer to the lack of healthcare access in the world.

“The purpose of the organization was to go into third world countries—like Guatemala, Honduras, Haiti, and Guyana—with aid,” Brock says. “We were an airborne organization, and we would parachute into these places—airdrop food and supplies when necessary.”

It wasn’t until about six years later that the mission was brought closer to home. And that shift in work began with a phone call.

Brock received a call in 1991 from the Mayor of Sneedville, located in Hancock County. At the time of the mayor’s call, the town’s hospital had closed and the only dentist had moved permanently out of town. The mayor asked Brock if RAM would consider bringing dentistry and volunteers to the small town of 1,300, 58.5 percent of whom live below the poverty line. Brock loaded a couple of dental chairs into a pickup truck and set on his way with volunteers in tow.

“There was quite a group of people waiting for us,” Brock recalls. “We saw 150 dental patients that day, fixed their teeth the best way we could, and a week later we got a call from another county in Tennessee asking for the same help.”

The momentum built from there, and soon RAM was aiding United States communities through special aid operations called clinics, or “expeditions” as Brock often refers to them.

Each expedition is different, but often involves providing dental and vision services to residents of a community in need, in addition to medical care, diabetes aid, women’s health check-ups, and even veterinary care.

Getting the Work Done

When a town or municipality contacts RAM in search of aid, Brock and his team get right to work. It’s a small staff at RAM, so like any nonprofit, the volunteers are vital. Since the organization’s founding, more than 114,000 volunteers have assisted RAM in 893 expeditions.

Madison Dunn, a Cocke County native now living in Putnam County, is one of those volunteers. A nursing student at Tennessee Tech with degrees in biochemistry and microbiology, Dunn serves the organization as a “host group leader” for Cookeville, assisting in clinics in her town.

“My job is to keep all of my committee chairs and assistants on track to pull off a clinic,” she says. “The Cookeville clinic has seen roughly 875 patients each of the past two years. It means that a lot of potential patients are relying on me and my team to pull this together so they can get the much-needed help that they may not otherwise receive.”

Host group leaders secure the clinic location, meet with officials, and help committee chairs and assistants in any way they can. The most recent clinic in Cookeville was in March 2017, but planning began roughly seven months prior. It’s a time commitment, Dunn says, but it’s a team effort.

“I have recorded 400 hours at RAM clinics since April 2016,” she says. “This is not counting the hours spent driving and flying to clinics or planning them, just the time that I have logged while volunteering at the clinics.”

Clinics vary in size in regard to the number of patients they serve. A clinic in Baltimore this year aided nearly 1,600 patients; one in Orange County, California yielded a patient count of nearly 7,000. And as a result of those substantial numbers, the organization has to ensure it has volunteers, like Dunn, to cover the work and see as many patents as possible.

However, obtaining volunteers isn’t always easy. In fact, Brock says it’s one of the most difficult aspects to his work.

Volunteers assist in all aspects of the work on the day of a clinic. They can be found checking patients in, ensuring there is always sterile medical equipment and cutting prescription lenses to size, among a myriad of other tasks. But these vital volunteers are only one piece of the puzzle. The other vital group are the medical professionals—dental assistants, dental hygienists, and opticians, to name a few. This is where it has proven tricky.

“The volunteer spirit in the United States is strong, but unfortunately the government makes it hard for volunteers,” Brock says. What he means by this is that when a physician obtains their license in a certain state, in most cases that license cannot cross state lines and therefore neither can the physician’s services. Brock has been a firm advocate of changing this law nationwide over the years and helped Tennessee successfully do so in the mid ‘90s.

“Ever since, we’ve been allowed to bring in practitioners licensed in other states. And that’s good because regularly, about 60 percent of our providers are from somewhere else.”

Brock has worked actively to bring other states on board in changing that law, but continues to work to bring the entire country along for the ride: “I’ve gone to Washington to make an appeal in the hope that there will be a federal law to allow doctors to cross state lines, but at no cost to the government or taxpayer.”

And yet, even though this issue proves challenging when planning a clinic, the team at RAM does everything in their power to combat that and work with communities to ensure physicians are there for those in need.

“So many people depend on RAM,” Dunn says.

“These are unusual times,” he says. “And in recent years, with the change in weather and disasters coming at us sometimes five at a time, we need to be able to use all of these volunteers.”

The organization owns seven planes, a fleet of trucks, a 55,000 square foot facility in Rockford and about 200 acres in Blaine with their own hard surface runway. Brock says his current dream is to add a commercial size aircraft to the fleet, totally dedicated to relief, something he envisions being called “Compassion Airlines.”

“My hope is that one of the major airlines will allocate one of these to us and either sponsor it… or if not, give it to us,” Brock says. “It will sit half loaded with nonperishable stuff like water and blankets because we’ve got people ready with their backpacks packed, ready to respond to these disasters. Then we can respond immediately, not only in the Western Hemisphere, but also into Europe, Africa, or wherever.”

In the meantime, the team makes due with the fleet they have and their willingness to partner with companies and ask for help. Planning to spend almost the entire month of December in Puerto Rico, Brock says they had 63,000 pounds of emergency survival supplies intended for the communities there but had no way of getting it to the island, until a partnership with FedEx proved to be just what they needed.

“I asked, ‘If I can bring it to Memphis in trucks, will you carry it for us to Puerto Rico?’ and they did,” he says. “We followed and helped unload and made sure it was being distributed to people who really needed it.”

The RAM team continued their work in Puerto Rico throughout the month of December, hosting clinics in various communities and doing what they do best: providing top notch medical service to those in need.

There is no shortage of those seeking medical care in the United States and across the world. It’s a harsh reality, but it’s one that pushes Brock, Dunn, and the entire team at RAM to continue the work they do.

If interested in volunteering or supporting the work of Remote Area Medical, readers can visit www.ramusa.org.