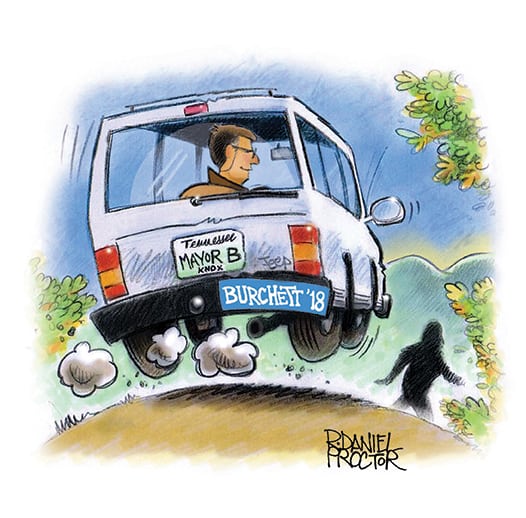 The reaction among Republicans locally to those three words extends from, “Darn right,” to, “Can’t see it,” to the most important three words of all in a statewide campaign: “Where’s the money?”

Burchett, Knox County’s mayor, is term-limited out of office in 2018. What he’ll do next is a conversation starter among GOP faithful trying to deduce his future direction and whether they want to sign on to help, ride along, or forgo the trip.

To paraphrase a southern saying, there are two tall-hogs-at-the-political-trough possibilities for Burchett should he wish to stay in politics: governor or U.S. Congress.

Burchett has been a Tennessee state representative, a state senator, and, as Knox County Mayor, a chief executive officer. The combination of state legislative and mayoral experience, along with having won elections, separates him at this point from other announced Republican gubernatorial candidates, Knoxville businessman Randy Boyd and Williamson County businessman Bill Lee.

Burchett’s principal problem in considering a governor’s race is that he’s not a multi-millionaire. Or even a millionaire. Having a six-figure net worth or income isn’t written into the state’s Constitution as a requirement for statewide office; however, it has become a reality in recent years.

Tennessee’s last two governors, Phil Bredesen and Bill Haslam, were able, if necessary, to self-fund their campaigns.  In fact, had Bredesen not put millions of his own dollars into his 2002 election victory, then-U.S. Rep. Van Hilleary might well have won that election. Hilleary lost to Bredesen by about 50,000 votes out of some 1.6 million cast.

Burchett’s past election victories offer a model by which he could win a governor’s race. His assets are that he speaks two languages fluently: Tennessean and East Tennessean, with the proper dialect.  His aw-shucks way of speaking and his generally lighthearted and informal manner mean it’s possible for Burchett to be underestimated, particularly by the more genteel strata of political geology. On the other hand, it could be the point of separation that makes the difference.

The model by which Burchett could be a gubernatorial contender is based on his first election campaign. In 1994, he waged a fight in the primary against a longtime incumbent Republican state representative. He had no money, no political name recognition, and many gave him no chance. Nevertheless, he campaigned door-to-door with a determination that bordered on obsessiveness. He wore out several pairs of boots. At least one voter, who Burchett had visited several times, quipped, “Look, I’m planning to vote for you unless you come back again.”

That’s a model that could work for Burchett statewide.  But duplicate that model in 95 counties and knock on the doors of 1.6 million voters or more? How?

The difference is Burchett’s differences. A neighborhood walk or two in each county, a speaking engagement that introduces him to voters, and TV commercials emphasizing his no-tax, make-sure-services-work message, would all show off his style of dealing with people.  Before too long the “talk” gets right: “You know, this Burchett guy is good.” And momentum begins.

For that to happen Burchett needs two things: to organize and staff a statewide campaign and to find big-dollar backers who can raise a lot of money and who will bet on a dark horse in a crowded field. Money is the key. Bredesen spent nearly $12 million to win his first race for governor, Haslam almost $17 million in his initial campaign.

Burchett’s other option is to wait to see if 2nd District U.S. Rep. John Duncan, Jr. retires, or to run against Duncan in the 2018 primary. Burchett is certainly well known, but Duncan has for nearly 30 years worked the district indefatigably. He’s the congressional equivalent of Cheers: everybody knows his name, and he knows theirs. As a senior member of Congress he’s worked his way to a position of influence for his district. Burchett himself, in a nice way, has said you’d have to “dynamite” Duncan out of his seat.

Would Burchett leave the mayor’s office and wait for Duncan to retire? Possibly, if he were assured Duncan wanted to serve only one more term. That would save Republicans, particularly Knox County Republicans, from a choice few wish to make. Or waiting might not be an option.

The betting here is that unless well-heeled financial backers demonstrate to Burchett that they’ll provide the money he needs to make himself known to Tennessee voters and give him a legitimate chance to win, he’ll run for Congress even if his heart yearns for the state capital.

The only question is when.