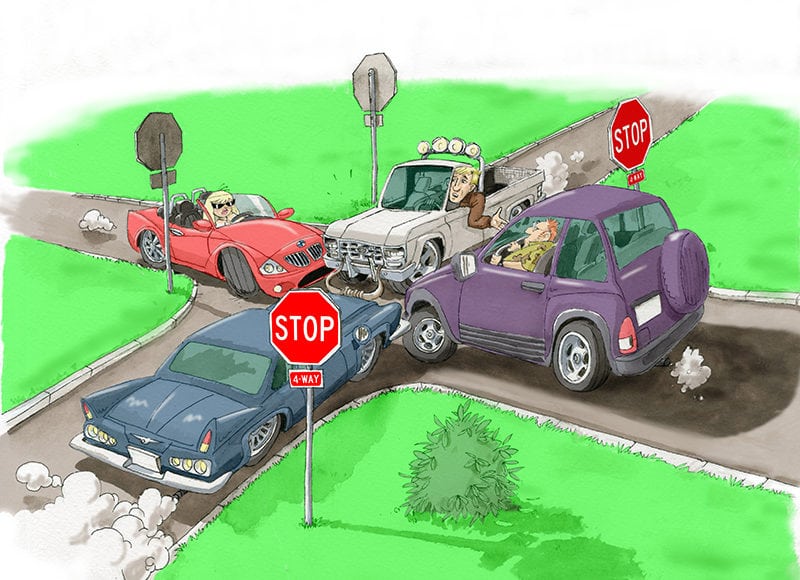 In Washington, DC, my hometown, the drivers are aggressive and awful. You have to sink to their level and act like a crazed maniac just to merge onto the beltway. When I moved to Knoxville, I thought things would be better. But when they’re not bolting down the road at 30 mph over the speed limit, they’re TOO polite, causing traffic jams by endlessly waiving each other into traffic! What gives?

While the Knoxonomist is sympathetic to your situation, he can’t help but point out that, given your location, a commute into Knoxville must take you on one of four roads: Northshore drive, I-40, Kingston Pike, or the racetrack that is Pellissippi Parkway. Driving during rush hour, any one of these is enough to give even the most I-95 hardened motorist waking nightmares.  Leave early and find a few back roads. You’ll be the better for it.

As for the inherent politeness of a few well-meaning Knoxvillians, it can be understood as an unfailing desire to be perceived as polite—all the while muttering “bless your heart,” a well-bred version of the middle finger and an Appalachian insult if ever there was one. It’s what we say when four-letter words are inappropriate in company. The Knoxnomist’s aunt Ada used to say this to her neighbor Helen when she would careen down the gravel driveway, sending hot summer dust into her windows and spoiling the sausage gravy. “Well aren’t you in a hurry,” she’d say. “Bless your heart.”

The Knoxonomist is reminded of a curious Knoxville phenomenon: the desire of some motorists at 4-way stops to wave others on, as if not obeying a simple traffic law was somehow helpful. The other morning, he was at the intersection of Cross Park Drive and Park Village Road, right next to that recycling place in Cedar Bluff, when the crossroads became paralyzed by three drivers attempting to wave the driver to their left into traffic—a paralysis of politeness that nearly led to a crippling accident that would leave fenders bent, radiators leaking, and tempers flaring. To his shame, I’m afraid the Knoxonomist lifted a symbolic “bless your heart” in protest.

This happens at the entrance to malls and shopping centers as well, when drivers fail to note there is no stop sign for incoming traffic. This is meant to achieve a sensible traffic flow, as there are more motorists entering than leaving at any given time. But no, the Knoxville polite will come to a complete stop, backing up traffic to the stoplight at the entrance and causing a traffic jam, simply for the pleasure of being mannerly. This is particularly problematic during the holiday season, when Ada and her husband Billy are out on their yearly visit to the West Town Mall. Billy isn’t a patient driver, and he’s likely to sacrifice the paint on his F-350 dually to make a point.

In the future, the Knoxonomist encourages you to be proactive in your driving. Behave normally by the rules of the road, get up to speed when merging, exit the interstate behind those who are entering, and others will be edified by your conscientious behavior. And when you witness the problematically polite, learn to say “bless your heart.”