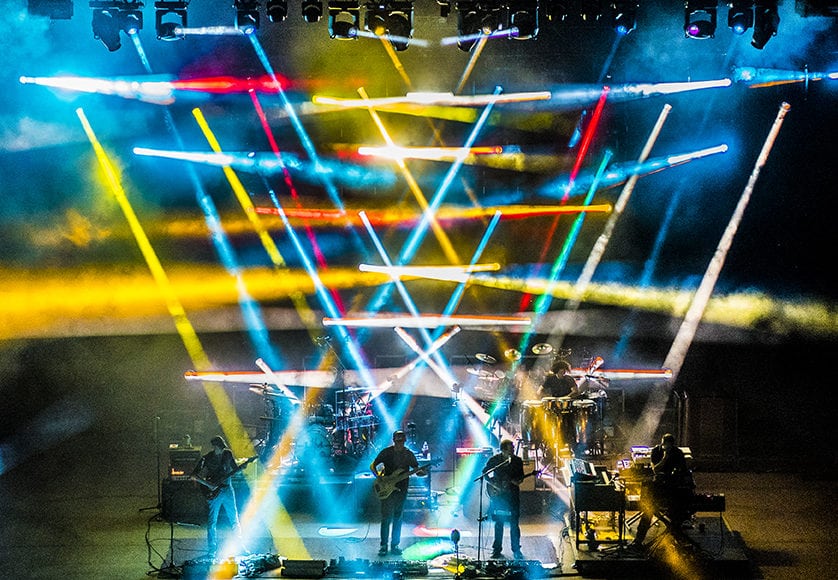 If you’re strolling along Gay Street on a hot August Knoxville Sunday and get the jones to jam out to some live music, Chicago’s Umphrey’s McGee is your ticket. Known for their funky rhythms and vibrant light shows, and performing a wide range of genres, the band has been on the road annually for 17-plus years. Their most recent studio album, Zonkey, offers a mash-up of reworked tracks by various artists—from Phil Collins to Pink Floyd.

UM’s Keyboardist Joel Cummins was good enough to answer a few of our questions.

Cityview: What motivates you all to work this hard after 20 years together?
Joel Cummins: To put things in a bit of perspective, Umphrey’s McGee played 162 shows in 2003, and in 2017 we’re going to play 86 or 87. So we’ve been able to cut way back on the frequency of shows, which has also increased the quality of what happens on a nightly basis. We’re very fortunate to be able to have control of that aspect of touring. Most of us are married and half the band has kids now. Having a more balanced schedule where we play 3-4 days in a row and then everyone goes home for a few days has kept our music fresh and given us good breaks mid-tour to see loved ones. I think our shows have been more consistent over the past couple of years since we’ve adopted that principle in how we approach touring. The last couple of studio sessions and albums we’ve sunk our teeth into have been incredibly different experiences, with the London Sessions being recorded in just one day at Abbey Road Studio in London in 2015, to many days both together and apart in the studio for Zonkey.

We put a significant amount of time in on the studio side of things these days, but it’s very different from playing live shows. We’re having more fun in the studio together than ever before. Most of us have enjoyed the experience for years, but these last sessions we’ve gotten Brendan to really loosen up and enjoy himself a bit more. Brendan, Jake, Ryan, and I played a little side show at a bar called A Live One in Chicago the night before we started recording this time around. And Brendan got a little loose that night, so that vibe carried over into the next day, and we were all in good spirits from the get go, simultaneously laughing at and with Brendan. Now having worked with Manny and Greg for many years, I think we’ve found a comfort zone in the studio where we’re being more productive than ever, while also lovin’ every minute of it, as Loverboy might say.

We’ve been working on our follow up album to Zonkey since early November, before Zonkey even came out. We spent June to October of 2016 compiling as many ideas and songs as we could to put down. We have a huge back catalog of recorded half-ideas or demos with a good section or two, so sometimes it’s about finding the right piece to complete the puzzle and having as much material available as possible. We probably had 35-40 different ideas, some complete some not, that were brought to the table. We recorded almost 25 of them, though at least one or two of them are not very serious attempts at music—just us having fun in the studio together. Once we’ve arranged an idea, we’ll rehearse it in the studio and try to get the arrangement down as a band. The biggest trick is getting something new to feel like it’s a groove you’ve been playing for years; achieving that comfort level in a very short amount of time is a challenge. That’s our typical modus operandi and how we recorded new material this past November. The entire band plays a new composition together to get the vibe down. Usually, we start with Kris trying to nail his drum part and then go from there as far as stacking parts compositionally. It’s easy for any of us to re-record parts later, but if you can write your part and get a good take of it with Kris live, it’s going to have a more organic feel to it in the end.

Listening and interacting with the mixes as they develop has become such a crucial part of what we can accomplish creatively today. At this stage, we’re listening to a lot of music being considered for the album and making tweaks to those with co-producers and engineers Manny Sanchez and Greg Magers from IV Lab in Chicago, who have been working with the band for many years. The added aspect of having technology to send high-quality mixes and creative ideas to each other has also helped us better arrange and produce the songs. It’s an exciting time to be making music together, and I’m glad that creatively we are still pushing each other in 2017. But we’re always working on new music, and I think that is what has sustained the band for as long as we’ve been around. I’m heading to Jake’s studio in the backwoods of Michigan next week. We’ve created a ton of music there over the years; the space really has some magic about it. Jake is a very gifted audio and studio guy, and the sounds he’s achieving coming out of his recording studio stand on their own.
CV: On your most recent album, you feature the mash-ups that have been a part of your Halloween shows for years.  Where did the inspiration come from, and what’s your favorite?
JC: The mashups started as us hearing Z Trip’s mashup of the Beatles’ “Come Together” and Nine Inch Nail’s “Closer.” We decided to cover it live one night and it sounded pretty good. The crowd loved it, too, so we figured why not try to write mashups of our own for an annual Halloween event? Nine years later, we have around 30 original mashups we’ve created. Some of them are humorous, some are more lyrically intertwined/related, and some are almost synchronistic in the way they work together. My favorite new one from the album is “Can’t Rock My Dream Face.” The Weeknd’s “I Can’t Feel My Face” and Michael Jackson “Rock With You” mesh together pretty seamlessly; that one’s easy to hear. But interjecting Fleetwood Mac’s “Dreams” into it is the one that really surprises you. I had a blast arranging that one and feel like it’s a good example of what the experience of having tried this for multiple years teaches you about what works and what doesn’t. Another Michael Jackson tune, “Thriller,” mashes impeccably well with Pink Floyd’s “Another Brick In the Wall.” That was the first mashup I tried my hand at back in 2008, and I feel like it almost wrote itself. The songs have eerie similarities. When we decided to create an album of mashups, we wanted to have the opportunity to get a recording of the idea exactly how we wanted it, which was often hard to achieve in the live setting. To me, that was the most fun part: getting to dissect all of the different tones and parts from different pieces of music and then trying not only to replicate them but also to re-contextualize them. I think the mashup album caught a lot of people off guard in a good way. Fans and new listeners alike found things to like about this chapter of Umphrey’s McGee’s studio career.
CV: You do lots of cover tunes. What’s pleasurable about performing them?
JC: For me, the best covers we play serve one of two purposes: it’s either to set the mood and bring the crowd together with something that’s known by most, or to educate the audience on something they should know. Examples of each type of song would be The Who’s “Baba O’Riley,” Pink Floyd’s “In the Flesh/Another Brick In the Wall,” or Michael Jackson’s “Don’t Stop ‘Til You Get Enough.” Those are all kick ass, well-known songs to most of our fans and will always get the room going. The second group of covers would be something like Chick Corea and Al Dimeola’s “Señor Mouse,” Mark Knopfler’s “We’re Going to War,” or Genesis’ “Abacab.” These are all incredible and very different songs that we cover because they need to continue in the musical lexicon, and we think part of our job is to make sure the next generation knows who Genesis, King Crimson, and Donnie Hathaway are. One funny by-product of playing obscure covers is that if someone doesn’t know it live, they sometimes think it’s your new tune. So that’s a funny mistake in perception that can occasionally benefit us.

My favorite covers definitely change from month to month. I really enjoyed playing Sturgill Simpson’s “Call to Arms.” That song strikes a chord in this moment in time. On a lighter note, I’d say Herbie Hancock and the Headhunters’ “Hang Up Your Hang Ups” is always a fun, challenging instrumental that really gets the crowd dancing.
CV: Everyone we’ve talked to says “see them live.” Why?
JC:  Umphrey’s McGee has a lot of unique composed material that people love. But seeing six musicians interact onstage, and bringing these pieces of music to life while splicing in sections of improvisation, lets our body of work breathe. 2300 shows later, there’s a certain familiarity with each other’s playing; the unique language we speak feels more effortless and natural than ever. There’s a human connection happening up there between the musicians, and there’s also a human connection happening between the musicians and the audience. These relationships have all developed over time for those who’ve invested the time. There can be a very special, impactful bond that can only be achieved and felt through music.