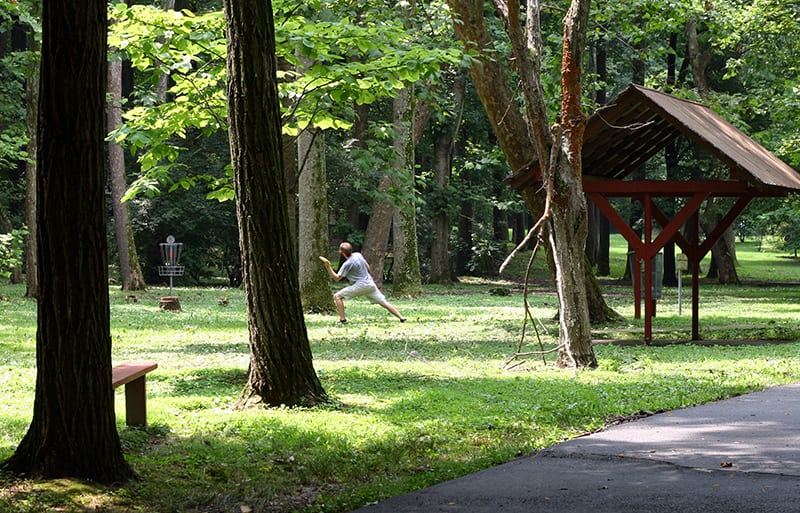 Disc golf. It seems ubiquitous in Knoxville these days, but how long has it been around, and where did it originate? If you Google it, you’ll most likely come up with Saskatchewan, Canada in 1926. Fast forward approximately 50 years to the modern game as we know it, and that is when it started gaining momentum with the public and formed a professional association.

Most of those I interviewed started playing around the same time I did. “I first started playing disc golf, or as we called it back then, Frisbee golf, around 22 years ago,” says Steve Foster of Knoxville. “I was driving down Northshore with my friend and we saw the basket for hole number seven from the road. We found the rule sign and decided to give it a try,” says Foster.

Mark McKinney, who resides in Farragut, was slightly ahead of the curve. “I was introduced to the game in 1989 when I was a freshman at Middle Tennessee State University,” Mark states. “It was a great way to blow off steam, and being a poor college student, the cost was right. We would play almost daily at Cedars of Lebanon State Park or Seven Oaks in Nashville.”

The main draws of disc golf are the low startup costs, the excitement of the sport, and the freedom associated with the game. Foster recalls, “I bought my first three discs from Pluto Sports when it was underneath Walgreens on Cumberland Avenue; they were three for $20.” As to what happened after that, Foster continues, “What got me into the game so quickly and so deeply was the sheer fun of throwing a Frisbee and watching it fly. I played for 46 days straight. This was before I had a wife and kids.”

The transition to a family-friendly game is another theme common with the now middle-aged players: the ability to take the kids out to the park and play, teach, and enjoy time with them. McKinney says, “I recently introduced my son and daughter to the game and they absolutely love it. We try to make it out a couple of times a month.” Their favorite local course is Anchor Park in Farragut, also known as Admiral Farragut Park. Foster just won the Master’s division at a sanctioned PDGA event, The Spring Fling, a few weeks ago in Morristown. He reinforces the idea that disc golf is for all ages and abilities: “The sport has grown up a lot and has transformed from a much more casual game into a straight-up sport. I enjoy both aspects of the game and lean more towards casual play as I get older and try to get my kids involved. It is a great game for people of all ages and abilities, and it’s mostly free if you can avoid collecting discs like an obsessed person.”

So if you don’t get obsessed with disc collection, you may find yourself at a local course having a blast with friends sometime soon—with very little spent on overall cost. It’s for family and friends at any level of ability, and all courses listed are free; though you might find yourself playing behind a pro. If so, ask for tips from our very open and friendly community of disc golf enthusiasts.

The Knoxville Disc Association may be found at knoxdiscgolf.org