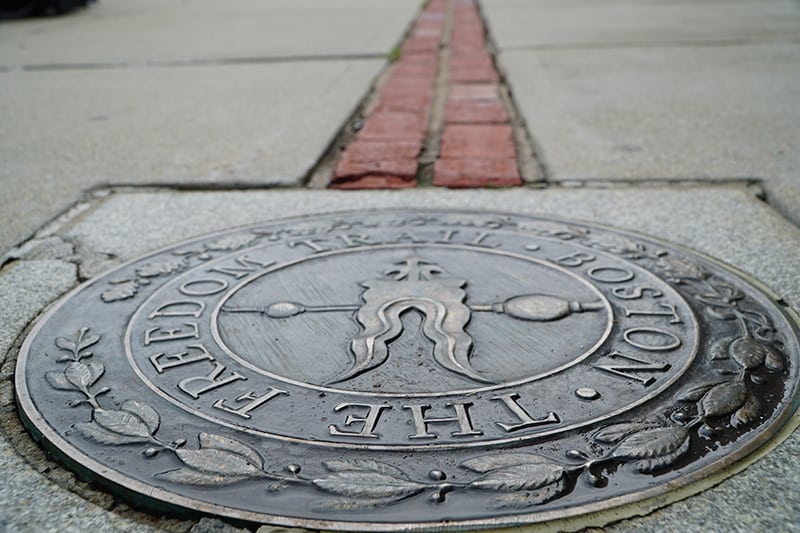 Long before Liberty’s beauty would be known to the world, William the Conqueror broke the Saxons in the Battle of Hastings in 1066 and ordered the building of the Tower of London. As she showed me around the iconic London landmark, the tower’s first ever female Beefeater Guard noted the little green where Henry VIII had wives and other high profile personages executed. But the majority of the tower’s victims were led down the cobblestone path, past the inn, out the gate, and up to Tower Hill where they would be killed publicly. As they passed the inn, an empathetic innkeeper brought the condemned man a beer, a custom colloquialized as “one more for the road.” Supposedly, one prisoner refused this customary drink, was led to the hill and was executed just moments before a letter pardoning him arrived at the tower.

Just a few days earlier, before we’d flown to London, my wife and I visited Faneuil Hall and walked the southern portion of the Freedom Trail in Boston. Marked by a red brick line that cuts through the city, the trail features the Old State House, a window from which one can look down at the street where, in 1770, five Americans were shot and killed by a group of nine red coats. Samuel Adams and the Sons of Liberty, who dubbed it the “Boston Massacre,” would meet a tenth of a mile away at the Old South Meeting House on December 16th, 1773. Adams would say, “This meeting can do nothing more to save the country,” signaling the Sons of Liberty to march down to Griffin’s Wharf and dump 340 crates of East India Company tea into the Boston Harbor before it could be unloaded and incur a tax for the colony.

It was not until we left England and reached an exhibit on the Kingdom of the Scots at the National Museum of Scotland that I again felt my hair stand up as it did within those American monuments. In harsh calligraphy on the museum walls was written The Declaration of Arbroath, crafted to declare Scottish independence in 1320: “As long as only one hundred of us remain alive, we will never on any conditions be brought under English rule. For we fight not for glory, nor riches, nor honors, but for Freedom alone, which no good man gives up except with his life.” Scotland would go on to give up its political sovereignty in 1707. Yet the freedoms of commerce this afforded soon allowed Scots to assume a dominant role in world culture for a century.

At Trinity College in Dublin a few days later, I read the proclamation that, “Standing on that fundamental right and again asserting it in arms in the face of the world, we hereby proclaim the Irish Republic as a Sovereign Independent State, and we pledge our lives and the lives of our comrades in arms to the cause of its freedom.” Ireland’s own 1916 Easter Rising was hereby ignited and she fought for and gained her independence in 1922.

The stories and symbols of freedom arise from more than one nation, and neither they nor the swamp from which they arose and into which they could again be plunged be forgotten. Never should we let down our guard to would-be unenlightened conquerors. Though each July we celebrate our own independence, we ought to think about John Wilkes’ remarks in the British Parliament in 1775: “I speak sir as a firm friend to England and America, but still more to universal liberty and the rights of all mankind.”

How to Look Within