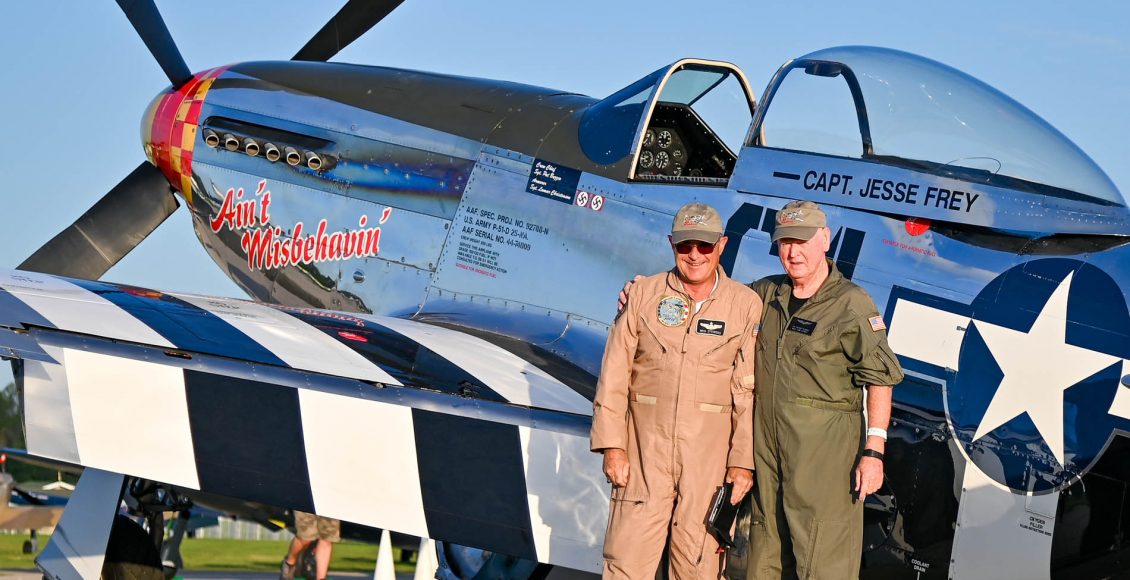 We have been flying on this last leg for roughly two hours heading to Oshkosh, Wisconsin, for the Experimental Aircraft Association’s AirVenture 2021 Air Show. Arrival at Oshkosh is not for the faint of heart, and for a few short days it will be the busiest airspace in the United States. Aircrafts converge at a point southwest of the airport and form a line, all at 1,800 feet and about one mile apart. The controllers call your plane by color and type and ask you to rock your wings to acknowledge. At moments it can be exciting.

The controller sends us to a downwind leg for runway 27 where we get our first glimpse of the seemingly endless rows of airplanes with tents pitched under their wings. Planes are landing three at a time on the same runway by using a system of dots painted on the runway. The controller calls, “277 Papa green dot,” and shortly we are down and taxiing in the grass along the runway, headed to the vintage camping area where there will be a total of 1,420 airplanes built before 1970.

Non-aviators are often amazed at the age of planes; ours is a 1955 Beechcraft Bonanza. The maintenance is so stringent on these planes that they last an incredibly long time. Here they are plentiful and the stories found in the camps around them are, too. The lineman moves us into position and signals for engine shutdown. We are in the middle of the lane, surrounded by all sorts of vintage planes. No sooner than the propeller stops and we climb out for a much-needed stretch, are we greeted by a group of people known as the Moraine Glue Angels. Early planes often have wooden ribs, hence the “glue”.

Compliments on our plane and offers to help set up camp abound. Brad, a cheerful fellow, offers Troupe a soda and me a beer. In no time, we are set up and Brad is back with offers to join them for dinner. I find out later that this group has been coming to AirVenture for years; they fly in days before the show begins so they can camp together and enjoy the camaraderie.

AirVenture has several different parts. The air show includes seven days of aerobatic performances by pilots from all over the country. Every type of airplane imaginable is present, from early general aviation to the most advanced military planes of today. Instruction and lectures are available on every aspect of aviation and home building imaginable, and then there are the vendors. If it can be used in an airplane, you can find it at Oshkosh.

Troupe has his sights set on viewing the vintage military planes, and I am hoping to see Knoxville’s own Wes Stowers and his “Ain’t Misbehaving” P-51 Mustang. We find Wes and score a ride for Troupe in this marvelous warbird for the next morning. Having ridden with Wes before, I know Troupe is in for a thrill. What a joy for me to see his enthusiasm and excitement for what I know will be the ride of a lifetime. Afterwards, we visit just about every WWII plane imaginable, and Troupe amazes me with his depth of knowledge on each and every one.

There is nothing quite like AirVenture. Even a brief rain shower or two is unable to dampen the experience. We simply take shelter under the wing-tip of our Bonanza, brewing coffee as drips of rain fall from the wing into my cup.

Writing this, I am relishing in the moments spent among the planes at AirVenture, with the new friends we met and the familiar faces we recognized while there. I hope to be able to join my new friends, the Moraine Glue Angels, as well as see my fellow pilots from Knoxville at next year’s event.