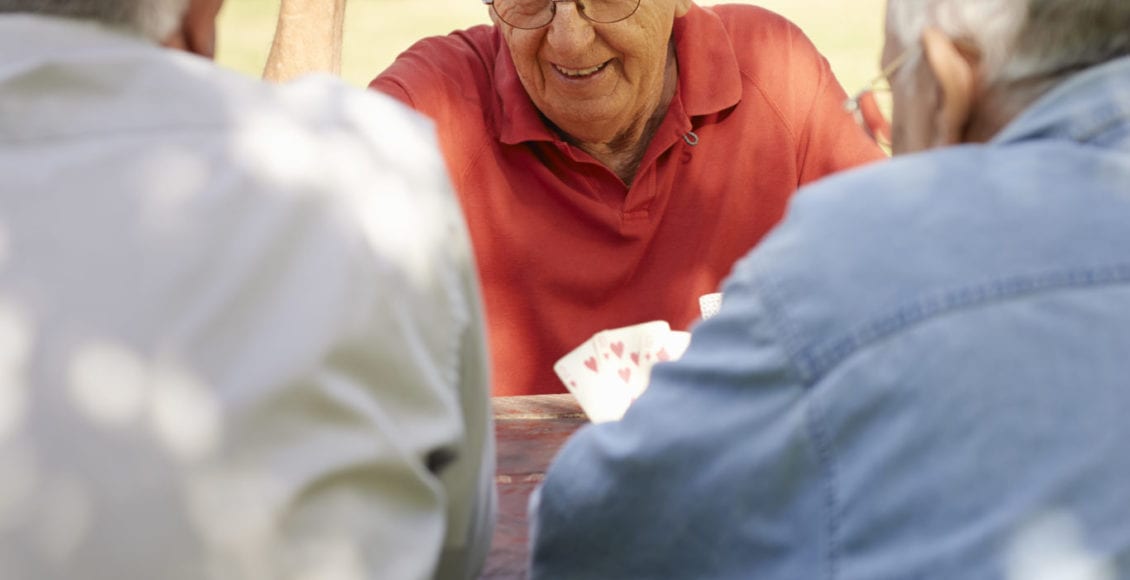 Discovering hope for those living with Alzheimer’s

On any given day of the week, you can find Harold Chandler spending time with his friends doing just about everything that makes him happy. It’s not unusual to find him singing, playing cards, doing crafts, or enjoying music. And you almost certainly will find him socializing, something he has always been known for.

“Everyone loves him,” says his daughter, Brenda Chambers. “He’s just got a presence when he walks in.”

“My father and his friends have fun and relax and just be who they are,” she says.

While her beaming description of her father’s quality of life might not reveal it, Chandler is one of 110,000 people, age 65 or older, in the state of Tennessee living with Alzheimer’s, a progressive brain disease affecting parts of the brain that control thought, memory, and language. The disease can make it difficult to carry out normal, everyday tasks, and while there are treatments, there is no cure.

Which is why spaces like Alzheimer Tennessee’s Howard Circle of Friends, where Chandler spends much of his week, can be so critical to a person living with the disease. It can provide a level of support for those affected by Alzheimer’s, and can ultimately help to improve their quality of life when so much else is in flux.

“The people embraced him and make him feel like he has some worth,” Chambers says. “He’s comfortable. He’s inspired. It gets him out of the house and gives him a sense of purpose.”

This is the hope many have for loved ones living with Alzheimer’s. And thanks to Alzheimer’s Tennessee and its programs like Howard Circle of Friends, thousands of people across the state are being supported during their difficult journey.

The organization’s mission tackles the trifecta of Alzheimer’s-specific needs: support for patients and families, promotion of brain health, and the push for research.

“Our scope and depth of services and programs and advocacy is really significant,” says Janice Wade, Chief Executive Officer of Alzheimer’s Tennessee. “We are looking ahead in terms of a vision that would hopefully stop Alzheimer’s, but people in critical need? They need an intervention now. We always say that until there is a cure, there needs to be care.”

Howard Circle of Friends falls within the first sector of the organization’s mission. To some it is an adult daycare, but for those there, like Chandler, it’s simply a safe space to experience a better quality of life—to be positively challenged in their cognition.

“I think he liked it, but acted like he didn’t,” Chambers says, recalling her father’s first introduction to the space. “But when he went back and came home, he was a different person just after his first day. He had something to look forward to.”

Aside from adult day services, Alzheimer’s Tennessee helps individuals through gatherings called Memory Cafes, support spaces that allow individuals to talk about the disease. There is even a 24-hour health line for people to call in day or night.

“Many times, people are just starting this journey and don’t know what they need, they don’t know how to make their home more adaptable and supportive,” Wade says. “We go out into homes to work with them.”

The services are also for the care partners, to provide relief, knowledge, encouragement, and comfort as they navigate the regression of a loved one’s cognition and health.

“One of the saddest things I hear is someone say, ‘I wish I knew about your work eight years ago because I walked this journey alone’,” Wade says. “Sometimes you hear about organizations, but until you’re faced with that need, a lot of times it’s not top of mind, so we try to create awareness throughout the year.”

Seventy percent of folks with the disease have care partners still in the workplace, Wade says, which is why programs like Howard Circle of Friends is equally as critical to family as it is to those with the disease. “They have a therapeutic day with us, and it allows care partners to stay active in their workplace.”

Community workshops, support groups, online programs like Caregiver Academy, and the annual Caring and Coping Conference, also allow care partners to learn on a variety of topics related to the disease and find refuge in a community of people going through similar life experiences.

The organization’s services don’t necessarily start and end with those currently facing the disease or those caring for them. With a roughly $1.3 million budget, the work actually begins much earlier in the process.

“We do cognitive screenings,” Wade says. “This is an educational tool that allows folks to look at the six different cognitive domains and take those findings back to their primary care doctor.” Each screening report includes strategies the individual can work on to help strengthen those domains.

And to take that preventative work one step further, the organization supports the research of brain health. This year, Alzheimer’s Tennessee is funding a specific study at the University of Tennessee that will look at folks with mild cognitive impairment or mild, early stage Alzheimer’s and research the potential to strengthen pathways of attention.

Each year in June, the organization also hosts a research symposium. “Research only has application if people know about it,” Wade says. Current research is shared, but scientists also share what is coming through the pipeline.

In September, organization staff attended a public policy summit on Alzheimer’s, spending time working with a congressional delegation to increase funding for this type of work. “It’s been a remarkable three years in terms of increasing funding for Alzheimer’s research,” she says. “We are very encouraged in that the wheels are certainly beginning to move forward in terms of investment, and it can’t happen soon enough.”

Making It All Happen

With a staff of just 15, it’s hard to imagine this much work getting done in one place. But like many nonprofits in the region, it’s the helping hands of volunteers that create its backbone. A local Board of Directors, an army of advocates who share their stories, these are what it takes, Wade says. “They give a voice to the Alzheimer’s and related dementias community.”

Flexibility is key; they aim to work with volunteers to fit opportunities into their lifestyles, interests, and skills. That’s how it happened for Christina Askren, a local police officer turned realtor. “I lost three family members to Alzheimer’s,” she says. “It is something so near and dear to me…and it’s something I don’t want other people to face alone.”

After losing both grandmothers to Alzheimer’s, she learned about caregiver support meetings and was asked to be a guest speaker. Her relationship with Alzheimer’s Tennessee grew from there. She encouraged her company to hop on board for the local walk to support those close to home “that are fighting the fight,” and next year will co-chair the five-county walk.

“It hits a nerve,” she says. “I’ve been there. They don’t know what to expect yet, so hopefully I can help create an understanding.”

The memories of her loved ones are what keep her engaged: “The next day can never be given to us, so every minute, every second, every moment is to make a memory with loved ones.”

With Mom in Mind

As Wade enters her 27th year at the helm of Alzheimer’s Tennessee, there is one person that is often at the front of mind: her mom. Wade was living in Nashville at the time she found out her mother’s Alzheimer’s was progressing. She came home to help, and for the next six years managed her mother’s care.

Like many, she felt ill-equipped to be a caregiver at first, but with Alzheimer’s Tennessee training, she was able to create her own toolkit and support system.

“It drew me closer to my mom, but at the same time it was heartbreaking and challenging,” she recalls, admitting that when the opportunity to be at the helm came up, she wondered if it would be too much. But what she found was that the immersion helped her transition the hurt into empowerment. “It encouraged me to make a change in the way services were provided and create a better situation for my mother.”

Wade lost her mother at age 77, after living with the disease for nearly a decade. It was a pivotal point in both life and career.

“Her journey was the pathway that led me to Alzheimer’s Tennessee,” she says.

Today, Wade is an advocate for not only the memory of her mother, but so many others living each day with Alzheimer’s and related dementias. “I see her face in the people we serve, and I’m proud of what we offer to the community.”