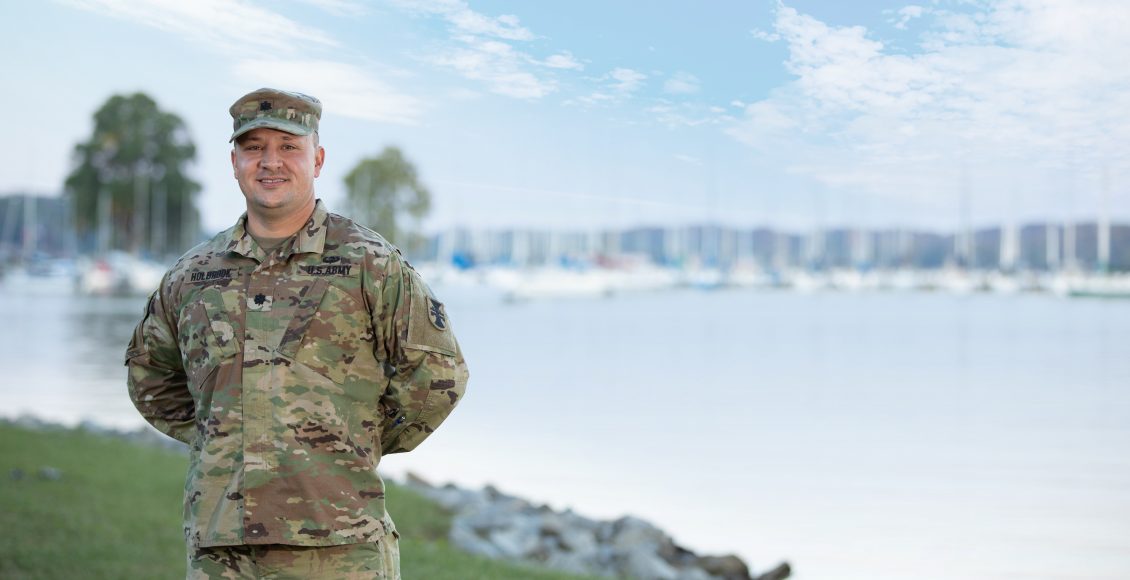 When Cadet Matthew Holbrook earned his wings at Fort Benning, Ga., in 2000, his grandfather surprised him by attending the ceremony.

The World War II paratrooper who jumped into Normandy proudly pinned the wings on his grandson.

“Except that he pinned his own wings on me—from World War II,” says Holbrook, commander of the 844th Engineer Battalion in Knoxville. “And I gave my wings to Grandpa. It was a wonderful moment.”

Eagle Scout Holbrook was drawn to the military before he was a high school student in Seymour, where he earned an ROTC scholarship and then a full scholarship to Cumberland College — majoring in biology and minoring in history.

And then there’s his family.

“I had two grandpas and two uncles who served in World War II, the Korean War and Desert Storm. My grandmother served in WW II as an Army nurse. Pretty special stuff to me.”

Since 2019 he has led more than 750 men and women of Knoxville’s 844th Engineer Battalion, an Army reserve unit that covers Greeneville, Gray, Chattanooga, Asheville, and specialized units in South Carolina and Georgia.

The 844th ranked number one of all engineer battalions east of the Mississippi River for the last four months of 2019. The battalions are evaluated on key performance indicators such as physical fitness, weapons qualification, administrative and logistical efficiency.

Very early in his military career, after being stationed in Baumholder, Germany, 22-year-old Holbrook would lead a platoon of 23 soldiers with the 40th Battalion, C Company, in Baghdad. This first tour began in May 2003.His unit’s 15-month tour was at the time the longest combat tour since the Korean War.

“I was in charge of training and our soldiers staying fit,” Holbrook said.

The platoon was first stationed in a small area in downtown Baghdad – Sheikh Maruf. Three times a day they patrolled, walked neighborhoods.

“By day, we had a security force at gas stations. There was a gas shortage and price gouging,” he said.

Relationships formed. His platoon earned trust with the Iraqis. The work was rewarding.

For nearly a year, the American soldiers were seen broadly as a positive presence, and they provided jobs for Iraqis.

“Around April in 2004 we took a bad hit, getting rocketed a lot. A car bomb hit outside our gate, and about 40 Iraqi nationals died that day,” he said.

The insurgents were sending a message. “Work with the Americans, and we’ll come after you.”

Checkpoints were everywhere, and this began to disrupt Iraq’s citizens’ lives.

Holbrook brought everyone in his platoon home from that first tour, was awarded a Bronze Star and in 2004 was named 1st Armored Division Platoon Leader of the Year.

Soon after, he was back in Germany for more training, became executive officer and was promoted to captain.

His second tour in Iraq in November 2005 came quickly.

He was first deployed to Kuwait to prepare for the surge — the increase in the number of American troops to provide security to Baghdad and Anbar Province. He would spend the rest of the tour in Baghdad Airport.There he became the equivalent of a human resources officer – an engineer performing HR work — evaluating commissioned and noncommissioned officers.

“If anyone got injured, we worked with them,” he said

What the military was giving Holbrook was training for life. Think first. Ask questions. Then act.

“I was responsible for paying Iraqi contractors for damage and repairs, and I sat in on Baghdad City Council projects.”

Holbrook liked the seat at the table, seeing the politics and balancing act of the Iraqis who were trying to help people versus just the strong guys. But he also missed the interaction with the average Iraqi citizen on this tour.

This was a much harder tour for Holbrook, who saw four of his soldiers killed. “I took that pretty hard.” They all received the Bronze Star and Purple Heart.

At the end of Holbrook’s second tour in November 2006 he was ready for stabilization and vacation.

Life kept moving swiftly, however, as he came home first to Seymour, then to a job in Nashville. And then in 2007 came his first child Hailey, a daughter with his first wife.

In 2008 he began a career with United Healthcare in Lexington as a network account manager, while commanding 100 Army Reserve soldiers.

Several years later Major Holbrook was second in command at the 478th Engineer Battalion in Fort Thomas, Ky., just across the river from Cincinnati.

And by 2017, Holbrook’s military career took him to a contingency response unit for the Army Corps of Engineers in Washington, D.C. This specialized unit commanded by a full colonel responded to natural disasters like hurricanes and California’s wildfires.

By 2014, Holbrook had remarried and settled in Farragut with their children and his wife Rachel.

“Rachel and I are definitely a blended family with our children Kyra, Elijah, Owen, Abby, Logan, and Hailey,” he says, smiling.

Today, as commander of the 844th and associate director of physician network contracting for United Healthcare for several states, Holbrook’s military career has “formed me into the person I am today.”

His military career has stretched his leadership skills, helping Holbrook to “stay calm while teaching me a lot of empathy and maturity.”

Even in the healthiest environment, commanding men and women in several cities demands focus and energy.And commanding in a pandemic in 2020 has meant a completely different kind of Army Reserve training.

Summer training’s new strict rules included masks, temperature checks and other public health protocols. Men and women were still living in barracks, so “if one gets COVID, everyone could get it.”

How is Holbrook leading under the shadow of COVID -19? “We strictly adhere to the public health guidelines,” says Holbrook. “This means trust in my sergeant major and other leaders. It means visiting our outside companies to show that we care.”

Holbrook always looks to the Army Reserve’s vision. “We make sure the 844th is ready to support the United States and defend the constitution—wherever that happens.”

While Holbrook cannot describe those missions, he emphasizes it is vital to stay safe and “keep our soldiers safe.”

Holbrook wants his men and women to know they are equal and that they are brothers and sisters.

“Each other is all we have. We all have to trust,” he says quietly. “There’s no room for racial tension.”

Holbrook finishes up his two years as battalion commander with the 844th in spring 2021 with the change-of-command ceremony. He hopes this special event is held in person and not virtually.

He’s looking ahead and would like to be promoted to full colonel. That means going to school to be eligible.

Between now and the 844th’s change-of-command ceremony in 2021, Holbrook is sure of his goals.