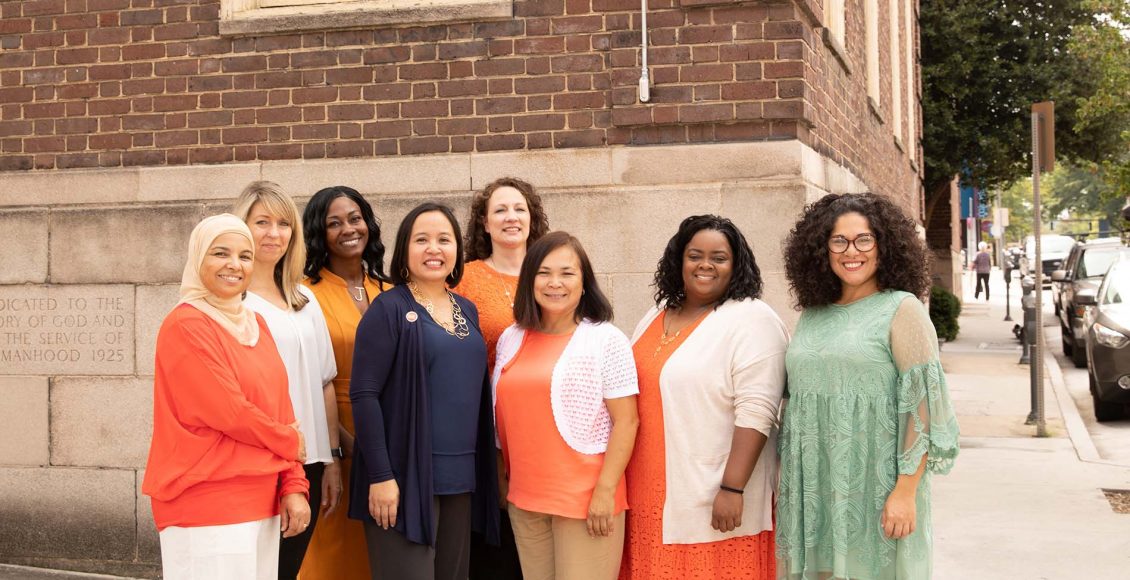 Creating a Community of Advocates

Fatima Ahdaouil has always loved working with the community. But it wasn’t until she began working with the YWCA Knoxville and the Tennessee Valley that she realized how powerful her ability to connect could be. As a Domestic Violence Victim Advocate, Ahdaouil has spent the last two years helping refugees and immigrants feel comfortable in their community. “We provide services free of charge and establish relationships with them so they know that they are safe,” she says.

Forming relationships is simple for her, though. After coming to Knoxville from Morocco, Ahdaouil worked as an interpreter and got involved in the refugee community volunteering where she could. “I enjoyed that work with the community, but I saw this need for the work I’m doing now.” She was drawn to the work of the YWCA. “They trust us, and we work with them toward reaching their goals, sustaining safety and self-independence.”

Ahdaouil’s work is critical for these women. Each week she works with upwards of 12 women who reach out to her anytime they are in need, whether it’s to find out how to get their children into school or seeking advice during an issue of domestic violence. She is there for them daily. “The position I am in is critical.”

The YWCA’s history in the Knoxville region dates back to 1899. And while the exact programs at the organization have changed many times over the years, their core mission has always remained the same: eliminate racism, empower women, and promote peace, justice, freedom, and dignity for all.

“Really what we try to do is identify and meet the greatest needs that are affecting women and their families,” says Alizza Punzalan-Randle, the organization’s CEO. “Right now, we’re focused on transitional housing, domestic violence victim advocacy services, violence prevention and education, and youth programming.”

The organization provides services in Knox and Anderson counties as well as parts of surrounding counties, and for Punzalan-Randle, she knows personally how these programs can help. “I learned how to swim here and went through a youth leadership program called Y Teens,” she says. And while Y Teens no longer exists, the organization is meeting current needs in the community, an aspect that drew Punzalan-Randle to join the team about a year ago. “I wake up every day and have to pinch myself because of just being able to be a part of this YW.” Its programs leave an impact.

One of the YWCA’s flagship programs is Keys for Hope. Located in the organization’s downtown Knoxville building, Keys for Hope houses 58 women throughout its floors, providing them the support they need to get back on their feet. “There isn’t a specific thing that has had to happen to you in order for you to fit the criteria,” Punzalan-Randle says, “Obviously, we have some criteria that we need to uphold, but you don’t have to just have had a mental health issue or domestic violence in your life. It could be a variety of things.”

Women ages 18 through 70 utilize this program, and every race, ethnicity, and color are represented here. “They just need a second chance,” she explains. Women can stay for up to two years in this program and in exchange the YWCA works with them. They ask the women to have a job of some kind when they move there, paying only nominal fees, but hoping to get them back on their feet while building their confidence in the process.

Helping women in this way is but one of a host of ways they are supporting the empowerment of women in the region. They are also working from a prevention perspective, working with people from across the region to build a community of advocates, a community of trust. That’s the crux behind the Gamechangers program.

Started just five years ago, Gamechangers was created to focus on bystander intervention when it comes to violence against women and girls. The program works with middle school-aged boys, finding them male mentors who work with them in groups over 14-week periods, talking them through a curriculum focused on healthy masculinity and how to have healthy relationships.

William Burnett began working with this program three years ago as a mentor. A 23-year-old, now University of Tennessee grad, Burnett had been looking for a way to get involved in his community and after seeing a post through Volunteer East Tennessee, he jumped at the chance to get involved. “It’s a learning opportunity to teach them about certain things in the world and what certain things mean and how to react,” he says.

For three years, Burnett worked with these groups of boys over the fall and spring semesters, putting together 50-minute to hour-and-a-half long presentations and dialogue opportunities. The YWCA provided the curriculum, but Burnett, like many other volunteers, took it and ran with it, creating unique and robust dialogue in his groups that he hoped would leave an imprint.

He covered everything with the boys from definitions on what things mean to bystander intervention and skillset learning. “I would ask them what do you think you would do in this situation and they would apply the concepts we talked about.” But the moments that hit home the most, were ones based on news stories or personal accounts from victims and a sharing of personal stories “Anything where you could get on the boys’ level and start relating things to high school,” he says. “When you’re a kid, it feels like all of those adult things that happen are so far away, and they feel so far removed from them, well you are not that far removed anymore,” he would remind them.

It is about changing the way they think and helping them realize what should and shouldn’t be normalized, Punzalan-Randle says. “Just because you hear it in a song, doesn’t mean that’s how your mother or your sister or your aunt should be treated.”

Burnett was dedicated to the mission. “It’s an hour and a half of my week. I came from a background of volunteer work, so it just felt necessary,” he says. And while he moved back to Nashville after graduating this year and is now unable to volunteer with the YWCA, he was recognized for his work, winning the Volunteer of the Year award through Volunteer East Tennessee. He was nominated by his YWCA team.

With a staff of 55 doing an unbelievable amount of work, these extra hands are critical. On any given year, the YWCA has 300 to 400 volunteers but there is always a need for more. Right now, specifically, Punzalan-Randle is seeking more adult male mentors like Burnett to join that Gamechangers program. “I want people to realize that in order for us to keep going and keep reinventing and addressing the needs that are current, we need your involvement.”

This YWCA team does not simply talk the talk about empowering women and creating dignity for all in their community; they walk it. They provide services, yes, but they are also partnering with entities across the region to ensure that dialogue and change happen. “It takes time, but you have to build that trust,” Punzalan-Randle says. “When you’re not a flash in the pan in the community but you really start to show up where people expect you to and where they don’t expect you to, you start to hear about things before they happen. And that’s really key.” That’s what has brought this organization success.

The YWCA has close partners such as the Family Justice Center, the District Attorney’s Office, even Knox County School District. Currently, YWCA staff co-chair a community coordinated response team on domestic violence. “We have everybody at the table,” Punzalan-Randle says, “to say, ‘What do we need to do that’s not being done, what do we need to do better, and what are we duplicating?’ It’s a great conversation to be a part of because you just see the potential.”

Relationships are key to making change happen. And that can be at the larger community level or at the personal level, like in the work Ahdaouil is doing. She and the other advocates cover six counties, fulfilling the needs of victims as they navigate the legal system, assisting them in safety plans, crisis intervention, and more. “Our advocates are becoming trusted figures in those communities, and it’s about finding the right spaces to give presentations,” Punzalan-Randle says, “to have small group sessions, and ongoing support groups so these women find a trusted source when they need it.”

And for Ahdaouil that’s what this has always been about. She is working one-on-one with victims, but she is also out there doing outreach and education. “I go everyplace I know there will be people who need to know about YWCA programs and services for victims of domestic violence,” she says. “It’s taking information and meeting potential victims where they are.”

All those served have a home with the YWCA. “We don’t discriminate against anybody,” Ahdaouil says.