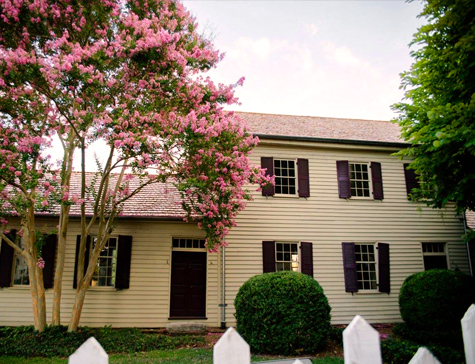 Have you always meant to get downtown to see the home built by Tennessee’s first governor — but never quite gotten there? Now you can see it from the comfort of your couch — or homeschool table.

The free tour begins outside the building. Click on the i’s for information and on the arrows to move you to another space.

Blount Mansion was begun in 1792. The floor plan was that of a simple Hall and Parlor house. Made up of two rooms on the first floor and half story loft above, this simple house was very common east of the mountains.

3. But William Blount had plenty of visitors.

Some of the most famous guests included Gov. John Sevier, a young Andrew Jackson, the naturalist Andres Michaux and several Chickasaw elders.

4. The house boasts a painting of George Washington. But the original artist wasn’t happy about it.

Reverse painting on glass was a common practice for Chinese artists in the eighteenth century, and one of them — a painting of George Washington — hangs in Blount Mansion. Gilbert Stuart, the original artist, learned that copies of his painting were being sold without his permission. He sued John Sword, the merchant who sold them, for copyright infringement and won the lawsuit.

The East wing was built between 1809 and 1825 as a formal entrance and parlour. This would have been a room to impress guests and show off the family’s wealth and taste.

5 Things to Know About a Local Online Art Auction