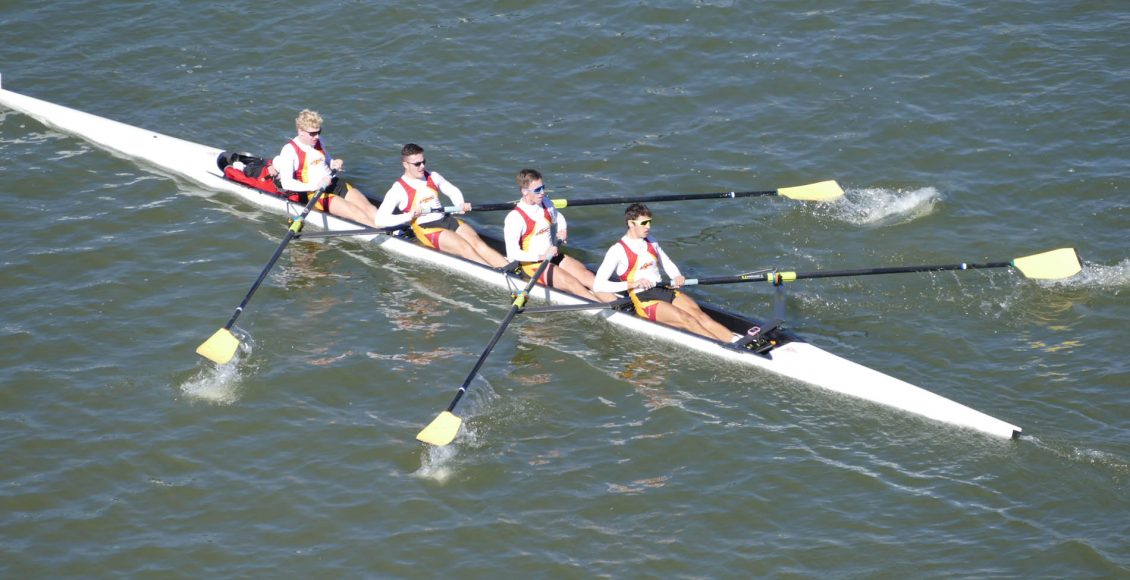 Each afternoon at the boathouse of the Oak Ridge Rowing Association on Melton Hill Lake, around 80 high school boys and girls arrive for practice. They lift their boats—singles, doubles, quads, fours, and eights—from their racks, walk them to the docks, and place them gingerly in the water. They secure their oars in oarlocks, and, on their coxswain’s call, extend their oars, put one foot in the boat, sit, strap their feet into their stretchers, and head out for practice.  Coach John “JD” Davis and his assistant coaches ride along in their green bass-boat launches, talking through megaphones.

This is the Atomic Juniors program at ORRA, made up of students from 14 area high schools and a sampling of middle schools. During a typical fall practice, the crews row more than 10,000 meters upriver and back. Other days they row downriver. The coach isn’t in the boat with the rowers in this sport; rowers rely on each other. “It builds strong bonds of friendship and habits of hard work, cooperation, and community,” Davis says. “When the boat reaches its potential, we call it ‘swing.’ When a crew finds a way to truly swing together, it’s a thrilling experience and a beautiful thing to see.”

And the athletes participating give their all. “I love rowing due to its nature of being a very grit-based sport,” says 15-year-old Maxwell Garza. “Meaning that people that truly try their hardest will exceed… It is also the only sport that whatever you put into it, you will get out of.”

Katherine Braman, a 16-year-old in the program, agrees. “There is an intrinsic satisfaction that comes from knowing that I have given every possible effort to the workout, practice, or race. I go home after rowing so happy. I enjoy seeing each of my teammates put in 110 percent of our own ability for each other.”

This is exactly what students in the Atomic program are known for. On this stretch of the Clinch River between Norris and Melton Hill dams—which ranks among the top five rowing venues in the nation—Garza, Braman, and their peers put in a level of work hard to imagine for such young athletes. But it pays off. The program competes among the top clubs in the country.

At the helm of this growing program is Davis. Tall and lanky with a face exuding wisdom, Davis would look right at home in a vintage film clip from The Boys in the Boat. Sometimes gruff while coaching, he can just as quickly break into a wide Californian smile. He knows what it takes to compete at the highest levels.

After rowing for University of California, Irvine, in the early 70s, Davis won national titles and came close to making the national and Olympic teams. In his 12 years coaching the Stanford women, their varsity eight finished in the top five times and nine oarswomen became national or Olympic athletes. In Palo Alto, he met and married Wendy Davis, who head coached Stanford, Yale, and Minnesota, where Davis coached the Minneapolis Rowing Club for 15 years. In 2019, Wendy became a Lady Vols assistant coach, which brought Davis to Oak Ridge.

With this sort of experience at the helm, it’s no wonder students go on to row in some of the best programs in the country. This summer, seniors Kailey Bostick (L&N STEM Academy) and April Chism (Webb) attended the USRowing Olympic Development Camp in Florida. Their peers join programs this fall at Duke and Marist (Noelle and Charlotte Fuchs, respectively, of Webb), Temple University (Gracie Dulin of Maryville), and Jacksonville, Florida University (Adam Calder of William Blount High School). Atomic alumni currently row for Clemson, Coast Guard, Navy, North Carolina, Stanford, Stetson, and the University of Tennessee.

This year, 26 Atomic rowers journeyed to the USRowing Youth National Regatta in Sarasota, Florida. A men’s four and a women’s four did especially well, the women finishing in the top eight nationally. “That was my favorite moment,” says coxswain Lauren Peters, a Bearden High sophomore. “We had worked hard all season long, and we ended up eighth in the nation.”

Lauren took up rowing in sixth grade after her brother, Dalton, had. “He loved it, and it is such a beautiful sport,” she says. For Dalton, it was the intensity of the sport that drew him in. “I figured that if I joined a rowing team I would become strong and stay in shape,” he says, adding that obtaining the win is the most enticing part. And he knows from experience. Dalton won a national sprint competition in Chicago this summer, in both a single and a double with teammate Jacob Trump. “We were both tired from previous races, but we ended up getting the win by three milliseconds.”

This summer, Lauren was one of 80 under-19 women—seven of them coxswains—who attended the USA Junior National Team Selection Camp in Chula Vista, California. After weeks of tryouts, she was selected to cox the US National U19 women’s eight, which competed and took first place at the World Rowing Federation’s Junior World Championships in Plovdiv, Bulgaria, in August.

“Lauren Peters, at age 16, is as good as any coxswain I’ve ever had while coaching college,” Davis says, “and she just keeps getting better. Her role is so complex: race leader, boat steerer, motivator, and a hundred other things all at once. Most importantly, the coxswain’s job is to be the voice in the rowers’ minds that says they can give more when the voice in their body says they can’t.”

The Atomic program is open to students aged 12 to 18. To learn more, visit www.atomicrowing.com.