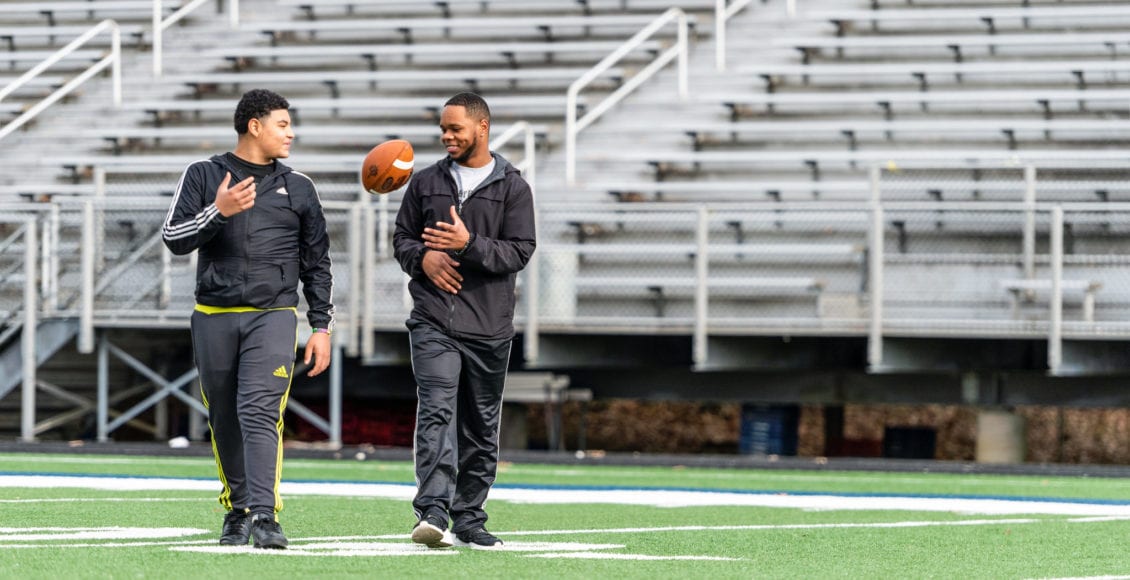 A Positive Impact on Young Lives

It was about five years ago when Brent Crabtree became a Big. A director at Cellular Sales in Knoxville, he was seeking new ways for his company to partner with regional organizations that were providing critical services for their neighbors. So he invited an organization to his office to do a presentation about their work empowering youth.

The organization was Big Brothers, Big Sisters of East Tennessee. And while Crabtree thought this would be a simple way for the organization to get volunteers, he never anticipated that it was he who would be moved to action.

“I sat there thinking, I don’t have time for this, but when I saw the video, with well-known people in it, people I knew,” Crabtree recalls, “I knew I had time to do it.”

He reached across the table, took a card, and filled it out. And that was the start of his life as a Big. “My life has been changed ever since.”

Mentoring at its Finest

While that was just five years ago that Crabtree joined the volunteer team at Big Brothers, Big Sisters, the organization has actually been serving Tennessee youth since 1970. The premise of the organization is to match children ages 6 to 18, or “Littles” as they are called, with adult volunteers, or “Bigs.” Bigs provide children facing adversity with strong one-to-one relationships, rooted in support. In Crabtree’s office building alone, there are seven mentors.

“This organization is instrumental in establishing that one-on-one relationship and engagement with a young person who, for the most part, really needs a good role model,” Crabtree says.

And with three types of mentorship programs—site-based mentoring, community-based mentoring, and Mentor 2.0—students are offered mentoring in ways that work for them, their families, and their mentors. “I’m not sure I’m the best, but we’re just being a positive impact in their lives,” Crabtree explains. “We’re teaching them about character and the positive impact they can have on their community and school and friends.”

The opportunity to teach these critical lessons is made simple by the work of the organization’s staff of 26 (and an additional four in the Tri-Cities office).

“Once someone completes orientation, there is a fairly extensive process that includes reference checks, background checks, and interviews,” says Brent Waugh, the organization’s CEO. “We go above and beyond because we really focus on child safety. Once we go through the process, they are matched with a child with similar goals in life and similar struggles.”

The process takes roughly three months to make a match, but the relationships last much longer. East Tennessee Bigs remain matched for an average of 30 months with their Littles, while the national average is 24. “Research shows that a match that lasts less than a year can be detrimental,” Waugh says.

Chris Whitehead, a Program Specialist at Big Brothers, Big Sisters, was introduced to the organization originally as a Big during college. His Little at the time was Jalanden, a 10-year-old, and the two spent the next three years growing a bond that Whitehead would never forget. But it wasn’t until he joined the Big Brothers, Big Sisters team, that he saw first-hand how much work went in to making that match.

“I went through the process as a Big, but when I started working [with the team], I got to see all that can be part of it,” Whitehead says. “It’s a lot of work, but everyone who works here shares the same type of passion. That correlates to matches, and that’s a big deal.” Whitehead is currently a Big to Little, Ethan. They were matched two years ago.

Crabtree and his Little, Deontae, are another fine example. The two live in close proximity to one another, making the logistics of their mentorship effortless. They hit it off immediately, Crabtree says, and that was due to the work put in to matching them. Deontae, a fifth grader at the time of their meeting, loved the outdoors, just like Crabtree, and over the course of the next four years, the two have spent ample time outside, hiking the Smokies, camping with family, attending football and baseball games, even go-karting in Pigeon Forge.

And as the activities happened, so too did the life lessons. “We would talk about character and how important it is to engage with adults, to look them in the eye when talking and how to present yourself,” Crabtree says. “We spent time with different people and talked about how to interact with family.”

Deontae is the oldest of five children. How he interacted with his siblings was important, Crabtree told him, and so they even have worked together on what it means to be a leader for them. As Deontae entered high school, those lessons became even more important. Now a ninth-grader, a “big transition,” as Crabtree calls it, Deontae is learning more than ever from his Big.

Crabtree participates in the community-based mentoring program of Big Brothers, Big Sisters, but that is only one of three programs the organization offers. Community-Based mentoring involves Bigs and Littles meeting for roughly two to three hours, two to three times a month doing traditional mentoring in settings chosen by the duo, like go-karting in Pigeon Forge for example. Site-based mentoring, on the other hand, happens at school. Bigs and Littles meet for roughly an hour each week for a half fun, half instructional time.

And then there’s Mentor 2.0, a program that Waugh says is as unique as they come: “Through Mentor 2.0 we serve kids who will be first generation college students. The students are paired with mentors who have a college education and the goal is to get them to graduate college.”

Big Brothers, Big Sisters is the only agency in the state to offer it, and what makes it unique is that it is a flexible volunteer opportunity for a mentor. There are only eight in-person meetings with the students a year, and there’s a curriculum for it with writing activities covering critical college-readiness topics such as financial aid, professionalism, perseverance, and self-advocacy.

“It helps them develop both in and outside of the classroom,” says Meghan Glintenkamp, mentor to 16-year-old Monica in the 2.0 program, “so that they can feel empowered and equipped to pursue their dreams and set their sights on achievable goals.”

While the commitment options are varied for a volunteer mentor, there are still 100 youth in the region waiting anxiously for a match. Waugh says they do everything they can to encourage mentor sign-ups, such as volunteer fairs, lunch and learns at companies, even referrals, but that’s the critical piece.

Waugh and his team continue to put in the work. With Mentor 2.0 as a new driving force for engagement, his hope is that community members will see the value in this work they do, just as he had when he met his Little, Eli, when he was nine. “I’m very passionate about the mission and about the work Big Brothers, Big Sisters does,” Waugh says. “The members are as well.”

There are those who have been with the organization a few months and others who have been mentoring for more than a decade, a testament, Waugh says, to the mission and the people who stayed and stuck with it all these years. “They get it just as much as I do.”

As mentors talk about their experiences, it’s sometimes hard to tell who gains more from these relationships, the Big or the Little. While the programs have helped thousands of youth over the years realize goals and feel empowered to be who they are and grow during a critical point in their lives, the mentors seem to gain just as much out of it.

“My Little provides positive perspective to me and challenges me to be a better version of myself by her expectations and encouragement,” Glintenkamp says. “My sweet relationship with my Little, Monica, reminds me that our community grows best when its members intentionally help others succeed.”

It incorporates the mindset that you would not be where you are today without those who chose to help you get there, she adds.

Fostering one-on-one relationships with the youth is what this organization is about. And those connections? They create a ripple effect on the lives of the Littles. The idea that one positive interaction can create hundreds of positive reactions in the long run. And for those involved, it just feels right.

“This program provides an opportunity to make a long-lasting impact for such a small time commitment,” Glintenkamp says. “I hope to see more people in our Knoxville community get involved.”