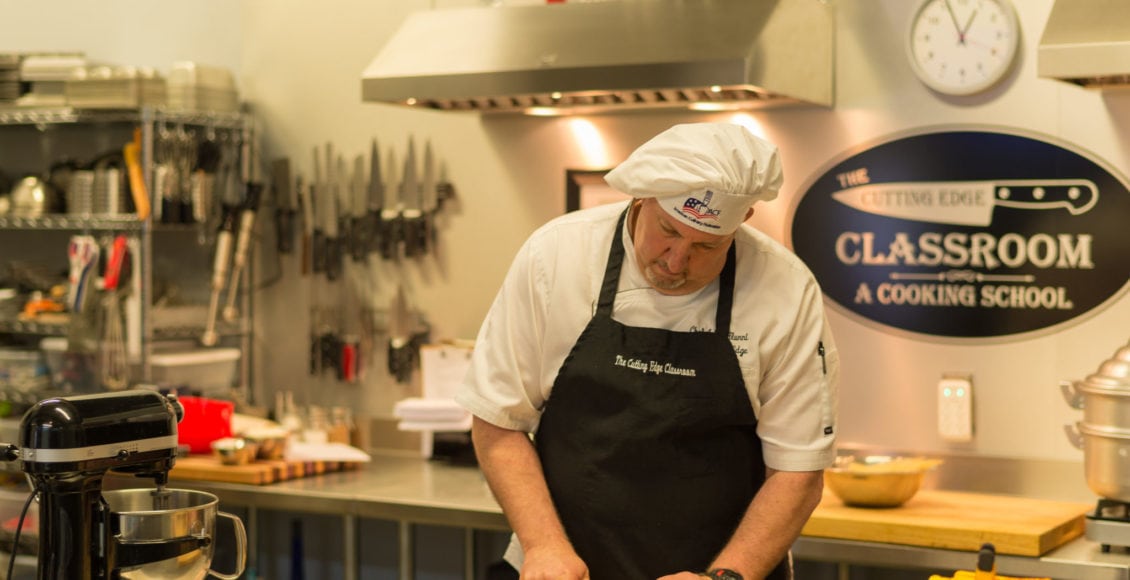 One of the basic truths of cooking in the early 21st century is that folks don’t learn it at home as much as they used to. This is foremost in Chef John Alunni’s mind as he guides The Cutting Edge Classroom cooking school in its goal to educate East Tennessee in culinary skills and introduce fun into the kitchen. Teaching was something he embraced later in life, after years as a professional chef. But he found that he loves being able to share with other people what he’s learned throughout the years. Alunni evangelizes cooking as an expression of the playful creativity fundamental to human experience.

“You don’t have to be an artist, but imagination is one of the keys to cooking.”

How long have you been a chef?

For about 37 years. I started out in the military and worked my way up to restaurants and resorts. Then I got a hospitality degree and went to work as an executive chef. I got out of the kitchen for a while to come open an Earthfare in Knoxville.  After a year, I decided to get into teaching culinary, which I was doing at UT until I opened this business.

Recipes are a guide. I try to teach them to understand that a recipe is like following a map. We try to teach them enough technique and enough skill that they can prepare things without having a recipe in front of them, where they have to read it step-by-step. Especially with kids. I like them to experiment and to use their brains, and a little bit of their imagination. I think that doesn’t get enough exercise sometimes. . . .

What precipitated your move into education?

As you get up in the years as a chef, you’ve got a lot of knowledge, but your body might not be ready for the 12-14 hour days. When I first started teaching, I did it for the easier schedule. Then I found it to be my love.

You appeal to a wide range of students with a range of classes.

We offered services first to kids. Their palates aren’t expanded beyond short order and fast food. Then we decided to try it with adults who want to up their game. Team-building is one of our many private classes. We had the whole Ice Bears team in for a burger challenge team-building event right after we first opened. We have a family that comes in and takes classes with us. We have a bachelorette party coming up.

What’s a good first step for someone who hasn’t spent much time in the kitchen?

Take a basic class or two, no matter where that is. Get an idea what it is you need to learn first. You have to know what you want to learn.