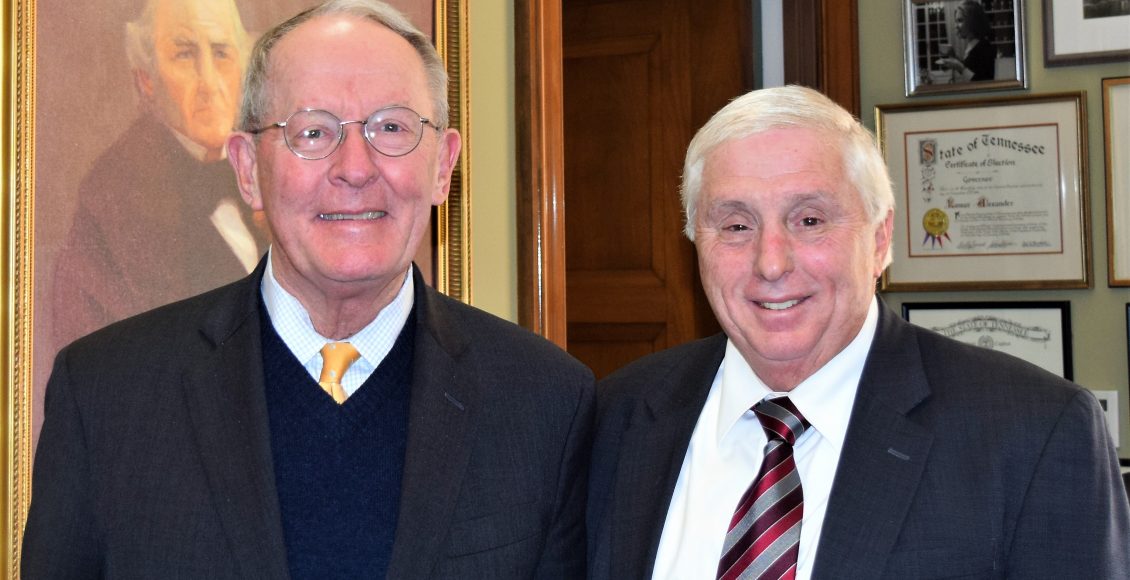 In 1978, Lamar Alexander started walking across the state toward the Tennessee governor’s office. In 2020, he will walk out of the U.S. Capitol, retiring from the U.S. Senate.

That trail between those two events has seen him hold four of the state and country’s most powerful and influential positions: Tennessee governor, University of Tennessee president, U.S. Secretary of Education, and U.S. Senator.

His Senate service began in 2003, a departure from his CEO experience running Tennessee, a university, and a cabinet-level U.S. government department. It’s a public service record that few have matched, and perhaps few ever will.

Alexander reflects on what was accomplished during those years in the roles that most impacted Tennessee.

“Being a good governor is most of the time like Moses pointing with his staff and saying, ‘Let’s go this way,’ while the Senate is more like being a parade organizer,” Alexander says. “I was Republican Conference chairman three times by my fifth year: It was too political. I wanted to spend my time on issues I care about.

“It gave me a chance to work on the two most sweeping bills, fixing No Child Left Behind (through the Every Student Succeeds Act, ESSA), which affects 100,000 schools and 50 million children; and the 21st Century Cures legislation, which speeds up lifesaving cures for a variety of diseases, from cancer to Alzheimer’s to flu, and is very helpful in research on COVID-19 today.”

ESSA took from the federal government the authority to force states to meet federal requirements or adopt Common Core. Instead, it became a state decision.

Another Senate high point for Alexander was the Great American Outdoors Act, which permanently funds the Land and Water Conservation Fund. The Sierra Club called it “one of the most important conservation bills in a generation.” Said Alexander, “That (legislation) is closest to my heart.”

He’s also proud of fixing songwriter royalties so they can be paid fairly; “five record years of funding for science and laboratories,” and infrastructure legislation that he said will result in the Chickamauga Lock’s completion.

“I’d tell (Senate) colleagues that it’s hard to get here, it’s hard to stay here, and while we’re here we ought to do what we can for the good of the country,” Alexander said.

Alexander served as UT president from 1988-1991, before President George H.W. Bush asked him to become U.S. Secretary of Education. Higher education moves somewhat like a glacier, slowly and almost imperceptibly; nevertheless, progress at UT was made, he says.

“I tried to do as president what I did as governor (who serves as UT Board of Trustees chairman): set it on the path to increase its academic excellence, achieve higher admission standards, more recruitment of outstanding faculty.”

Creating a close relationship between UT’s science programs and Oak Ridge and ORNL is something that he says Tennessee governors and UT presidents have continued because it was important to “recognize ORNL as a massive asset.”

A source of satisfaction from his gubernatorial years was success at raising family incomes, a large component of which was recruiting the auto industry to Tennessee. “By the mid-‘80s (Tennessee) had the fastest-growing family incomes, a direct result from having no auto jobs to having 1,000 suppliers in the state and three big manufacturers: Nissan, Saturn, and later, VW.”

His Better Schools legislative initiative (“We became the first state to pay teachers more for teaching well”) and road improvements are big on his list, but Alexander says Tennessee Homecoming ’86, a statewide celebration of Tennessee’s heritage, may be the biggest.

“Homecoming ’86 helped hundreds of communities focus on themselves and focus on their strengths,” he says.

When he was recruiting the Saturn plant to Tennessee, he hosted a group of executives. He asked Charlie McCoy (“the world’s greatest harmonica player”) to play for them.

“A lady said to me that she was so embarrassed, that ‘All these fine people are here, why not give them Chopin?”

“I said, why would we give them average Chopin when we have the finest harmonica player in the world? We got comfortable with ourselves during the 1980s.”

As he walks off the national stage, what’s next?

“I haven’t thought about it much; it’s kind of like turning a page in a very good chapter in a very good book: you don’t know what’s in the next chapter, but it should be pretty good. Looking back over the time Tennesseans enabled me to be governor and senator, I’m very grateful.”