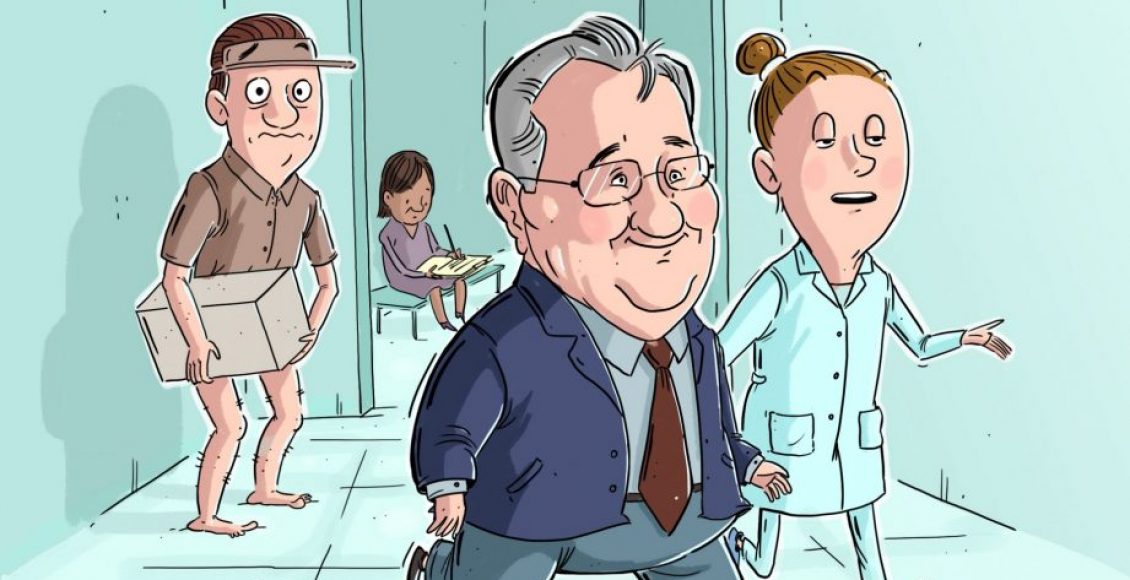 Why is the build-up to being seen
more work than the appointment?

I don’t know about you, but I dislike going to the doctor. It’s not because I’m afraid of needles or even the dreaded prostate exam. My aversion is to the medical forms and procedures now in common use by doctors’ offices.

It seems as I get older I’m spending way too much time making doctor’s appointments and keeping them. I also get too many robo telephone calls from either a doctor’s office reminding me of an appointment or from Walgreens alerting me that I need to buy more pills. And every doctor has a recording to remind me to arrive an hour early. Don’t do it. It’s a total waste of time because the doctor will only be running late, and you will just sit there for an hour-and-a-half (or more) before you get called back. The “arrive early” request is a sure signal they have developed new forms for you to fill out.

Speaking of forms, why do I have to complete new forms at every visit? Did you ever notice that when you are given the clip board with 20 pages of forms to fill out, each page requires you to repeat the same identifying information? I’m thinking of having a stamp made of my name, address, Social Security number, telephone number, smoking habits, etc. How many times do I have to tell them that my mother did not have a pacemaker, but did occasionally smoke and drink alcohol? This all seems unnecessary, especially in my podiatrist’s office and 45 years after my mother’s death. Where do doctors get these forms? Most of them have nothing to do with the nature of their practice. Should my orthopedic surgeon with a sub-sub-specialty in the thumb need to know if I have ever had a ringing in my ears? The answer is: yes. My ears ring or hum all the time and have since 1985, but what does that have to do with my right thumb pain?

It’s possible doctors really just want to know about our health insurance or our ability to pay their bill, but are embarrassed to give us a one-page form providing that information because it would appear too avaricious. Trust me, I understand the need to be paid and would gladly fill out a one-page form with only two questions: Do you have health insurance, and, if not, how do you expect to pay the doctor? What they should really just ask is, “What’s in your wallet?” Just leave all the other stuff about my grandmother and my nervous breakdown out of it.

Of course, all the papers you have to fill out and sign warn you about the importance of privacy and how careful your doctors are to make sure nobody knows that you are receiving medical treatment or what your medical problems might be. Everything is top secret until you enter the doctor’s office and go to the receptionist. From that point on, you are processed in a way guaranteed to reveal your confidential information. In a doctor’s office just last year, I signed in and saw the names of everyone seated in the waiting room. Thank God. You see, I’m bad at remembering people’s names but good at remembering faces. I read over the sign-in sheet to see if I recognized a name in order that I might be prepared to greet my old friend when I turn around to take my seat. Now I not only know my old friend’s name when I see her face, but I know she has urinary problems.

As I sat and waited to be called back to see a doctor one day, the receptionist called out my full name loudly. Now everyone in the room put down their Cityview magazine to see what I looked like. “Yes, I’m here,” I replied. She asked, for all to hear, “Mr. Pryor, are you still being treated by Dr. Overholt for dry skin and itching?” Now my secret is out. Yes, I use Dove soap. It reminds me of the guy who ran a café in downtown Knoxville years ago. He would take your order at the counter and then call out your selections when ready. He did not mark orders by name or by number. When he was ready, he would simply say, “Who ordered the double cheeseburger with extra mustard, potato salad,

bowl of beans, and double chocolate cake?” I would slink up to the counter and embarrassingly claim my feast acknowledging the applause of my friends and fellow lawyers.

I recently took a retired friend to lunch, and we timed our stop on the way back for his sleep doctor appointment. When we walked in, there were approximately 10 patients waiting in various stages of rest. As we approached the counter, I loudly announced, “I’ve brought my friend in for his appointment, but I feel he should withdraw from the program.” Now that I had everyone’s attention, I said, “I don’t think he needs any sleep treatment today because he fell asleep twice in the car on the way over here.”

Just remember, what you think is the waiting room is just the “first” waiting room. Don’t be fooled because there are more waiting areas when you advance into the inner sanctum. These secondary waiting rooms are where they ask the same questions you answered on the forms. The last time I was again asked if I smoked cigarettes, I told the nurse, “Only after sex, and I haven’t bought a pack of cigarettes in several years.”

Then there’s the pants situation. I don’t know about you gals, but all medical providers make us guys remove our pants at some point during the visit. I think it’s some kind of medical requirement. I was seen one time in the emergency room with my first and only case of vertigo, and the male triage nurse warned me three times before I arrived at the examination room that I would be required to remove my pants. Sure enough, when we finally arrived at the examination room, off came my pants. I think that was his favorite part of the job. Reminds me of the guy with a runny nose who was told in the doctor’s office to go into Room 3 and take off all of his clothes. Reluctantly, he complied only to notice another naked man in the corner of the room. “Why is it they make me take off all my clothes when I only have a runny nose?” The man in the corner replied, “You think that’s crazy? I’m just here to deliver a package.”

This, of course, brings me to my number one complaint about going to the doctor. I have eight doctors, and I haven’t really seen any of them in over a year. I don’t know where they are. Perhaps they are busy making new forms. I can’t seem to get past the nurse practitioners or physician’s assistants. Don’t get me wrong, I’ve met a few doctors in my time, and in some cases I prefer their professional assistants. Some assistants are friendlier, smarter, and more informative, but sometimes you just want to see the doctor to be assured that he or she knows who you are and why you are coming to their office. Frankly, I prefer lady doctors. Unlike their male counterparts, they probably paid closer attention in class and they’ve all got that great intuition that we men can only envy. Pardon me for being sexist, but I think it’s easier to talk to a woman about medical matters.

In any case, the assistant comes in and typically asks, “Well, what are we here for today?” I always want to respond with, “Why don’t you read the three-paragraph narrative you made me write in the waiting room? And my mother didn’t have a pacemaker.” I feel uneasy when these mid-level assistants treat me without even talking to the doctor. I hear that at the end of the day the doctor is supposed to go over all of the assistant’s charts. Sure. But I could have been given a pill and be dead by then. It’s the same feeling I get when in the middle of a flight the captain comes strolling down the aisle asking if everyone is enjoying the flight. “Yes, but who the hell is flying the plane?”