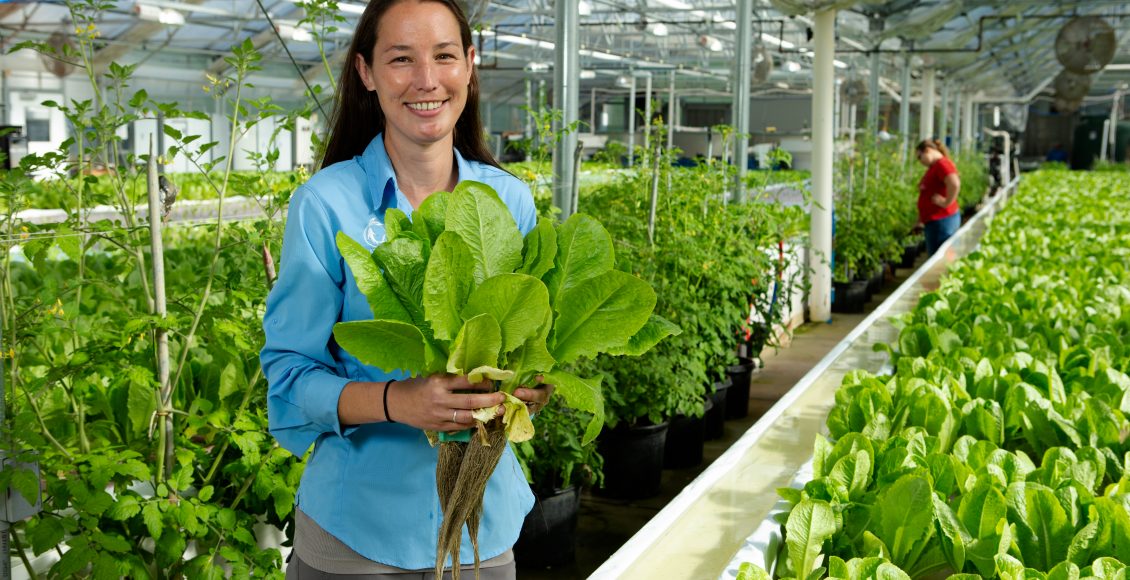 The weather is always perfect here, 68 degrees. Pristine plants flourish all year long in crisp, refreshing air. Even the water tastes better here. It’s a piece of heaven carved into a hilltop in Lenoir City.

Whoever wrote “Corn won’t grow at all on Rocky Top” obviously never met Ryan Cox. “We can grow 600 types of crops,” he says. Right now, corn isn’t one of them, but there are plenty of other fruits and vegetables growing here, along with several species of fish that thrive in an aquaponic paradise he calls HATponics.

“HAT” stands for “Hydro-Aqua-Terra.” A combination of fish, water, soil and plants creates a containable, self-sustaining environment. The symbiotic relationship of fish and plants differentiates hydroponics from “aquaponics” because it eliminates the need for additives required in water alone. They foster the natural processes that occur in every lake, stream and river, cultivating an ecosystem that reduces the impact on global resources and provides clean, nutritious food in a seemingly unlimited supply.

From this picturesque hilltop that was once weed-filled and eroded, Cox orchestrates a global business that provides nourishment on five continents and in 22 countries. HATponics was recognized in 2013 as one of the Tennessee Ten, the top ten businesses picked from the state’s accelerator programs as the most promising new ventures. HATponics moved from Chattanooga to Lenoir City in 2018, relocating scientists, engineers, equipment, fish, dogs, and a rescued calico cat from a trip to Jamaica.

How was the seed of this ambitious idea planted? “Inspiration comes from the strangest places, and you’re never really ready for it,” he said. A serial entrepreneur with several business ventures under his belt, he watched the movie Beyond Borders and wanted to contribute to the world’s humanitarian efforts. He set out to invent the first portable, aquaponic system so he could deliver farms to people instead of delivering beans and rice that might be pillaged or would run out. With a sustainable fish and vegetable farm, the supply would become endless. He’s dropped “HATs,” the portable farms, into areas of need from inner cities to outer regions of the world. The idea of the company is to be able to respond quickly and use existing resources. That’s how you become the mecca for a new manna.

He often partners with churches, schools, and nonprofits to fund, develop and maintain programs and send students near and abroad to help others in dire need. Their work becomes part of a bigger picture of balance, relationships, and synergy between plants and fish, communities and schools, people and planet.

The COVID-19 pandemic interrupted his efforts but also created an immediate local need. HATponics was able to pivot its business resources within 48 hours, shifting its focus to help fill the void in local food distribution through an online virtual farmer’s market that provides a fresh food resource and connects local growers to consumers. HATfresh.shop features many of the favorites of Nourish Knoxville’s farmers markets for pickup or delivery.

Along the way, he has turned to teenagers, both interns and volunteers, to provide creative ideas to his team. “Why not look to the children for answers? Children are better dreamers. Plus, it’s the problem of the future generation to address a growing population with depleted or polluted resources. What they learn and gain from being part of the solution gives them the confidence that they can change the world.”

He describes his product as “more organic than organic.” His produce requires no additives, pesticides, or added fertilizer. As for the fish, they are certified by Cleanfish and sustained in clean water that is full of the natural nutrients that are part of the system. Pests don’t have to be controlled. Minnows, ladybugs and beneficial bacteria do that. The water is heavily oxygenated, which makes the air seem better on the Lenoir City hilltop.

As Cleanfish defines its certification, “Upstream is where every CleanFish begins. It starts with a person and an idea. It starts with the brave choice to walk a different path, to turn away from how things are to how things should be.”  That’s a good definition of Ryan Cox and HATponics.

The HATponics headquarters delivers 6,000 pieces of produce a week and cultivates 16,000 fish. Each plant and fish has a destination. The fish may restock streams and rivers or go to conservationists who are repopulating endangered or overfished species.

All the rainy weather in our region is good for business. It means Cox won’t tap into ground water for at least a year. The 16,000-gallon reservoir is full, keeping 300,000 gallons of water in constant motion.

It is, in part, all the water that helps to hold the temperature to a perfect 68 degrees. The solar panels are digitally controlled. It’s all monitored in the Cloud. Cox can gauge the conditions of all fish, plants, water, temperature and air for HATs around the world, ranging in size from that of a kitchen counter to a football field.

Although the primary focus is on local and world hunger, it takes resources to monetize that huge effort. In the world after COVID-19, HATponics can resume its efforts to cultivate test beds for tailor-made ingredients for restaurants and invite the world to come for “glamping” in glamorous campsites. In experimental testbeds and on the hillside, more exotic offerings are being cultivated. Thousands of berries and fruit trees will burst into bloom on the terraced hillside, richly nourished with filtered fertilizer from the fish tanks inside.

Running a global effort calls upon Cox’s background in international relations, business, and growing up in an agriculture family, though he swore he would never go into farming himself. It also helps that he speaks six languages fluently. But, he says the universal language is math. “Aquaponics is a math problem.” It’s a balancing act of fish body weight and plant requirements. The ultimate equation is to make it possible for water and power needs to equal zero.

During its first year in Lenoir City, HATponics transformed a craggy mountaintop into paradise operating at full capacity and coordinated HAT farms that help feed 7 million people. With an increasing demand for HAT and sustainable farming facilities, an engineering division was opened to complete $1 million in construction projects for communities, businesses, and residential clients. They fed hungry manatees that ate 200 pounds a day at a rescue program in Seaworld, developed exotic ingredients for the restaurant industry, hosted international guests who were taking their ideas to help nonprofits abroad and set up the first commercial HAT farm in the Dominican Republic. Cox’s goal, he said, is to feed 30 million people by 2030.

“I found my soul in this…. I found my soul by helping a father feed his 8-year-old daughter who could not eat most store-bought food.”  The girl visited with her parents during a home-school tour. She was sensitive to many additives, fertilizers, chemicals. Her father came to him in tears to help find a way to feed his child. They established their own aquaponic food system at home. “If I can keep their daughter from going to the ER once a month, it’s worthwhile.” He’s also helped cancer patients who needed safer, cleaner food during the COVID-19 crisis. The food is grown in a controlled environment and harvested by only two people. Fewer hands, fewer risks.

The food nourishes the body and it grows the minds of children who help solve the problem of world hunger. For Cox, HATponics nourishes his soul.